Brave Spirits Theatre adds its distinctive style to the Women’s Voices Theatre Festival with The Trojan Women Project. It is a singular event. The Trojan Women Project is packed with moments of dramatic sizzle from verbal and physical pokes and prods, along with striking flashes of sinewy poetry; surrounded by grounded, bracingly delivered monologues exploring knotty cultural and political issues of the here and now.

What is the newly devised The Trojan Women Project specifically about? It takes off from the solid bones of Euripides’ Greek classic, The Trojan Women. Brave Spirits transports the original Trojan War underpinnings to today’s Washington, D.C. The time is not long after the 2016 Presidential election.

The result of the 2016 presidential election “was a turning point in the creation of the play,” wrote Trojan Women Project Playwright and Director Rachel Hynes in her program notes. “We looked at the War on Women in America and decided that this was our Trojan War.”

Moving beyond the original Euripides characters, the devisors of the Brave Spirits Trojan Women Project venture included the active involvement of the 13-member ensemble. Brave Spirits “intentionally mined personal circumstances and paired them with specific historical events and universal experience while being mindful of voices that have historically been undervalued, misrepresented and hidden,” Dramaturg Laura Esti Miller observed in her program notes.

The Trojan Women Project arranges into a whole, a number of short-in-time episodes that bear witness to current events through the individual fears, dreams, and hopes of thirteen characters. Each has her own clear manner of tackling issues. At first, the issues range from toxic masculinity, control of women by men, domestic violence, the limited horizons that some women can face, and the question of who governs their own bodies. A paralysis from fear that the Trump Administration will take painful, harmful actions is palpable.

As The Trojan Women Project progresses through its two acts, the issues raised probe into more unchartered territory. Former allies begin to disagree about desired directions and outcomes. They are no longer united by a common enemy; toxic men and fear of the Trump Administration. The play catches major dramatic fire (not just a verbally delivered polemic charge) as the characters take on heated debate as if in a conflagration of flames. There is rich debate about neighborhood gentrification, class and race, sexuality, immigration, motherhood, and ageism, as well as conflict between white privilege and working-class people of color. Each topic is ripe for a post-show discussion.

Now, the provocative set up for The Trojan Women Project is this. The first thing the audience witnesses are the cast members strewn about the floor of the Convergence Theater. They are diverse in appearance. They are motionless figures, as if either frozen or constricted in death wrapped around chairs and themselves. Each of them attired by Costume Designer Kristina Martin in light fabric like night clothes or informal wear.

After a bit of time, there is projected commentary of two “know-it-all” men intoning that they had unearthed a great discovery; the previously unknown graves of Trojan Women and one male. Slowly each of the cast members comes to life. At the rear of the theater space, projections about historical events begin to appear. Each of the thirteen ensemble members dramatically steps into the spotlight with mannerisms of iconic women from the recent past – Eartha Kitt, Marilyn Monroe, Katherine Hepburn, Janis Joplin, Angela Davis, June Cleaver and Ruth Bader Ginsburg to name a few. Then the production pivots to a quick journey into some of the historical roots of women’s descent into submission with the apparent acceptance of a male-dominated place in society. Then, toward the closing of Act I and into Act II, The Trojan Women Project pivots again into more incendiary territory; heating up with theatrical oomph, accomplished confrontational interactions and a myriad of intersections as characters bring to the fore a different agenda based upon who they are beyond being female. It held me absorbed listening to each argument, made to sting with certain truths.

With its large cast and its numerous scenes, it can be almost unfair to parse out praise for specific acting or spotlight certain scenes. You likely will have your own highlights. With that said, several actors stood out for their work, Renea S. Brown (Reagan) and Nicole Ruthmarie (Nefertiti, aka Cassandra). This duo was mesmerizing as they argued using a different perspective on how to succeed in life. Over time, they come to learn they are not so far apart in being invisible to those not people of color. They each learn in their own time how others define them and who may be “mad” depends on one’s circumstances. Even a Miss DC may fall short in life when things get tough. And a conflagration when one has nothing to lose can make perfect sense.

And then there is Lisa Hill-Corley (Betty). How one actor could hold the floor so easily by merely stepping forward to speak, whether of the mundane of growing a garden to larger issues of seeing to the future to try to find a positive path forward, was astounding. She grabbed my attention like a magnet and never let me go.

Now for some scenes that have stuck with me here are several:

-The entire ensemble dramatizing the absolute terror of domestic violence with a formation of the thirteen cast members protecting one another while looking over shoulders to see if “he” is stalking. That brought trembles as well when one of the cast members asked “what did he do to you?”.

-A small sense that played out right before me as I sat: of being invisible to others because one identifies as gender fluid and another as too old to be attractive, until common caring is discovered through words and touch is poetry in motion.

-Ensemble work scenes in which those of the privileged white folk overlook those of the working class and people of color in a race to rename and beautify a neighborhood and win a prize, a walking desk.

-Listening to many of the characters repeat over and over “I’m sorry” as a mantra.

The Trojan Women Project is not static. It has a cadence of merged voice and movement. It is a constant intertwining of the aural and the visual. Under director Hynes’ approach, the large cast moves effortlessly through a maze of chairs and the audience. The entire Convergence Theater space is appropriated (minimalist set design and props by Brian Gillic). Fight choreography by Casey Kaleba is accomplished within the intimacy of audience and actor relationship. (Kudos to Fight Captain Claudia Rosales Water). Karen Lange adds impact with her underpinning music selections. Briana Manente is the Makeup Designer. (The use of lipstick as a silent weapon of power in several scenes was something else)

The Trojan Women Project from Brave Spirits is a forceful, intriguing work of political and cultural performing arts for any audience. The Trojan Women Project left me with bottomless questions as the recrimination of “how could you” swept over the production. As the notion that “aren’t we all in this together” began to waiver is a common agreed upon foe needed to stay together? Each audience member gets to decide for themselves.

Running time: Two hours and 20 minutes, with one intermission. 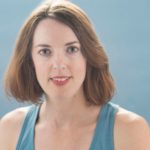 Rachel Hynes is a devisor-playwright, whose original works explore the themes of grief and healing. She is a DCCAH Artist Fellow, a winner of the Larry Neal Award for Dramatic Writing. She is the former Co-Artistic Director of the experimental theatre group, Helsinki Syndrome, creative lead of Collective Eleven and a proud member of playwright’s collective, The Welders.