Two powerful, verbally skilled women come together weekly for tea and talk for over a decade. They are locked in a power struggle about politics and cultural norms that affect a nation and the world. They can be like irritated scorpions in a small bottle, circling each other, ready to sting, but not quite fatally. The public must not know what the two discuss in private, let alone have inklings how they may feel about one another. Who are these two? They are Queen Elizabeth II and Prime Minister Margaret Thatcher.

This is the juicy premise for a London hit and Olivier Award-winning comedy Handbagged, which is having a sharply rendered, natty U.S. premiere at Round House Theater as part of the 2018 Women’s Voices Theater Festival.

Handbagged was penned by award-winning English playwright Moira Buffini. Initially a fringe piece, over time Buffini expanded the work into a full-length script. First produced in 2010, it found its way to London’s West End after a first stop at The Tricycle Theatre. With a high-spirited, devil-may-care, comic touch by British theater director Indhu Rubasingham, who directed the productions at the Tricycle Theatre and West End, the Round House production of Handbagged is an enjoyable evening out-on-the-town.

At its core, Handbagged is a fictionalized tale about regular encounters between Queen Elizabeth II (b 1926) and Prime Minister Margaret Thatcher (1925-2013) over the 11 year period, 1979 to 1990. Thatcher had been elected the first woman Prime Minister in the history of Great Britain. The time period was a fraught one in British history as the Buffini script makes clear with its quick snippets and short-hand use of historical names and daunting events that might be more readily part of a British DNA or an immersion in recent UK history. Do be ready for Robert Mugabe, the miners’ strike (a la Billy Elliott), Falkland’s War with Argentina, apartheid in South Africa. US bombing of Libya, and an IRA bombing attempt on Thatcher’s life, to name just a few.

At the center of Buffini’s theatrical conceit for Handbagged is this; Queen Elizabeth and Prime Minister Thatcher verbally take each other on in both older guises of themselves and as earlier doppelganger versions of themselves. These many scenes are steely, dripping with rancor, without raised voices. Rather there are tightening jaws and strong eyed looks of two women holding their anger barely inside. The interactions are not only between the Queen and Thatcher; but also between the younger and older versions of the Queen against herself and between the younger and older Thatcher. Oh, what a good shrink could make of these moments in time.

The more mature Queen is played by Jennifer Mendenhall and the younger version of the Queen, when first meeting up with Thatcher, is portrayed by Beth Hylton. The Queen, in either version, is an affable, witty, almost “lefty” very rich, great-Aunt-type of character. She is almost cuddly. One interesting visual effect; the two Queens are not only similar in appearance especially with wigs, but stand close to each other, even touching at times. For those who pay close attention to the real-life Queen Elizabeth, the mannerism, posture and waves of Mendenhall and Hylton are as natural as the real Queens.

Prime Minister Thatcher is portrayed by Kate Fahy at the later stage of her life and by Susan Lynskey at the earlier stage of meeting the Queen. No matter the age, Thatcher is a crusty, stiff, long-talking, “grocer’s daughter” with a major lack of emotional intelligence. She is often made brittle and personally unlikeable in the hands of director Rubsingham. Even in those moments when her facts are right and policy may be on her side, she is made an abrasive scold. When the two Thatcher’s are together there is a chill between them, with little or no closeness. But Thatcher does score points reminding the Queen she doesn’t pay taxes like regular folk.

To add major humor to the production, there are two male actors (Cody LeRoy Wilson and John Lescault) who play a bevy of richly portrayed characters ranging from a spot-on red-suited Nancy Reagan to the often humiliated Denis Thatcher, the randy husband of Margaret Thatcher. Wilson and Lescault seem to have a great time with their moments in the spotlight even as they play to get more time at center stage.

A major tip of the hat goes to costumer designer Richard Kent for his spot-on attire for the Queen and Margaret Thatcher which the program indicated were supplied by Tricycle Theater as were the delicious wigs. Wigmaker was Carolyn Hancock and wig stylist Dori Beau Seigneur. The utilitarian set design was also by Richard Kent. Jesse Belsky’s lighting design added theatrical touches including images of the Union Jack at appropriate moments.

Let me add that I learned a new British slang term. It was used by Thatcher when describing some of the men she had little use for. The slang term was wet. A slang dictionary indicated it is a term of derision for a man, calling him feeble, emotional or effeminate.

As for the term “handbagged;” what does it mean? According to the Round House program, it is a term used for a forthright verbal attack, or crushing a person or idea ruthlessly or forcefully. Its etymology? It was “coined in the early 1980’s to reference Margaret Thatcher’s fearsome reputation and omnipresent accessory” [her purse].

Handbagged is a buoyant, fun evening out with some opinionated British history lessons. For those with a love for the Queen, especially as she enters the final stretch of her reign, by all means, take it in for its fine acting and its high comedy. As for any anti-Monarchists still about, or strong Tories, you might want to stay home. You will only get angry. As for me, I do wonder, the Queen can’t be that nice and a lefty, can she be? I await to be schooled on those questions. 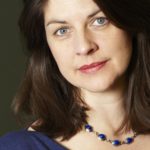 Indhu Rubasingham (Director)
Indhu Rubasingham is an English theatre director and the current artistic director of the Tricycle Theatre in Kilburn, London. She has worked with the National Theatre, St. Ann’s Warehouse, and the Royal Court Theatre.