“Who here is a feminist?” asked the Ring Announcer (Amelia Hensley). As she signed, wearing a bright red pantsuit and standing on a thick padded mat as used for a contact-sport match, a nearby hearing actor translated. “Who here fights for gender equality?” As if on cue, hands went up in the audience. We were being welcomed to the Feminist Fight Federation—or FFF as we were urged to finger-spell it—where the battle for gender equality was about to be waged as a live-action cartoon.

This was during Peepshow, dog & pony dc’s latest “audience integration” extravaganza, an intermissionless immersive experience devised for the Women’s Voices Theater Festival by an entirely “non-male-identifying” cast and creative team, for an audience of anyone game for anything who would then “complete the ensemble.”

Those expressions in quotes are dog & pony dc parlance for its egalitarian approach to creating theater that pitches the audience into the show. As dog & pony dc fans know well, and as newbies find out fast, if you want to watch from a safe passive-spectator perch, you’d do better going someplace else. But if you want to feel a fun part of the action, you can’t do better than dog & pony dc.

A pre-show press advisory made sure I would get this:

dog & pony dc invites audience to do any number of things during a given show. We respectfully request media reviewing our work to not intentionally disengage because they believe distancing will add objectivity and perspective. It will, in fact, keep you from experiencing the event in totality.

The upshot of this engagement was an unexpectedly good time. I say unexpectedly because truth to tell the thematic content announced for Peepshow included some pretty serious stuff:  men’s sexual objectification of women, the friction between waves of feminism, women’s complicity in their own oppression. It sounded more like the syllabus for a women’s studies course (not that there’s anything wrong with that!) than a formula for unabashed theatrical exuberance—which is what Peepshow essentially is.

The evening is staged in five loosely connected sections, the middle one being the abovementioned female fight club, which had the audience revved up and in on the joke from the get-go.

Before long the foursome sang snippets of “Cell Block Tango” from Chicago but with lyrics changed to “She had it coming.” Almost shockingly the names of recently exposed sexual harassers began to scroll on a flat screen as a cast member read them aloud—leaving no doubt what real-world events had precipitated these parody proceedings.

You don’t want to know too much going in, so I’ll give just a taste of the rest by mentioning an amazing scene that had no words. The set is a painted backdrop depicting a seashore, and a woman wearing an old-time bathing outfit (Ouida Maedel) is sunning herself and having a very pleasant time. To the side are buckets filled with what appears to be seaweed. Eventually, everyone in the audience gets handed one. And the mysteriously self-gratified bather shows by her example how we are to discover and savor what’s inside. I won’t give it away except to say that when I realized afterward what was symbolically going on, it blew my mind.

I left the performance aware that dog & pony dc has created in Peepshow a very different kind of safe space—a safe play space—for motley roomfuls of #MeToo and #TimesUp advocates and allies…and anyone else who is fed up with finding a harasser and abuser around every corner and having a perpetrator for a president. What dog & pony dc is up to is not only wholly entertaining. It is deeply replenishing. And right on time.

Running Time: About 90 minutes with no intermission. 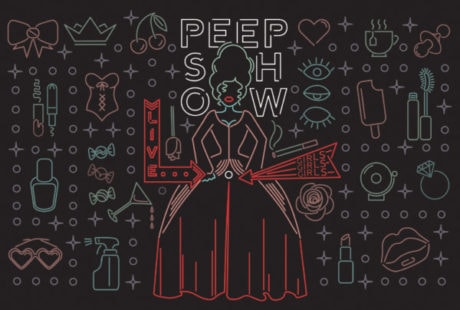 Recommended for ages 18 and older. Completely accessible to and enjoyable by hearing and Deaf audience members. To maintain the intimacy of the experience, attendance is limited to 30 per show.