There are certain meals that stay with you forever.

It could be the pie that your mom makes every Christmas, the soup that you made for your son when he had the flu, or the casserole you made your best friend when she lost her grandfather. Whether the memory is sweet or bitter, it will stay with you forever. This relationship between food and memory is currently being brought to life in Julia Cho’s Aubergine, Olney Theatre Center’s offering for the 2018 Women’s Voices Theater Festival. This exquisite co-production with Everyman Theatre is a breathtaking look at the cultural clash between generations and the ways that we try to bridge that gap.

Inspired by the 2010 death of Cho’s Korean immigrant father, Aubergine is the story of French chef Ray, whose terminally ill father moves into their dining room for his final days. The arrival of his uncle (who does not speak English) inspires the struggling son to recreate the only meal his stoic father has ever enjoyed. The meal quickly becomes an attempt to reconcile the differences between these two very different men before it is too late.

The ensemble of 6 embody this story with humor, vulnerability, and incredible nuance. Tony Nam as Ray constructs a touching emotional journey that is a joy to witness. Glenn Kubota as Ray’s Father speaks for only a few minutes, but infuses his words with a worldly wisdom that brought tears to many eyes. Song Kim as Uncle, who speaks only in Korean throughout the play, is brilliant with a monologue about Korean food that will make you salivate. Jefferson A. Russell’s Lucien fills the room with an effusive calm that provides necessary balance to the hard truths of this story. Eunice Bae as Cornelia lights up every scene she is in and Megan Anderson as Diane has the best monologue about pastrami that you will ever find in the theatre.

Both food and the theatre have a way of bringing people together. I don’t think I could compare Aubergine to a specific meal, but I can tell you what it tastes like. It is sweet, warm, a little bitter, and completely satisfying. It is something I would love to taste over and over again. 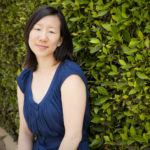 Julia Cho’s plays include The Language Archive, The Piano Teacher, Durango, The Winchester House, BFE, The Architecture of Loss, and 99 Histories. She has been a resident playwright at New Dramatists since 2004. Her work has been produced at the Vineyard Theatre, The Public, South Coast Repertory, Long Wharf Theatre, Playwrights Horizons, New York Theatre Workshop, East West Players, Theatre @ Boston Court, and Silk Road Theatre Project, among others. Honors include the Susan Smith Blackburn Prize, Barrie Stavis Award, the Claire Tow Award for Emerging Artists, and the L. Arnold Weissberger Award. Durango was also named one of the Top 10 Plays of 2006 by Entertainment Weekly, and one of the Best of 2007 by the L.A. Times. She is an alumna of the Juilliard School and NYU’s Graduate Dramatic Writing Program.