No one sinks her hook in you like Billie Holiday. You listen to her, following her voice as it quavers like a flickering torch and, when you recover, you’re bound to her forever. She’s the fellow alcoholic who whispered something to you both personal and profound one rough night, the lover who helplessly held you after you tried to tell them it was over. For those of us affected by her, who heard that lovely, occasionally faltering voice and followed it like a soul rushing to heaven, capturing her essence is an unenviable, impossible task. 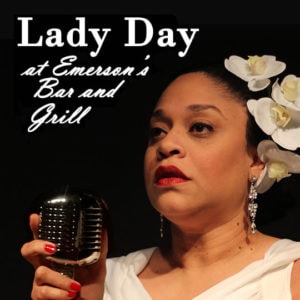 It’s no small feat, then, that Creative Cauldron’s production of Lanie Robertson’s Lady Day at Emerson’s Bar and Grill (directed by Matt Conner, scene and costumes by Margie Jervis) does precisely that. The charming venue is staged like an intimate nightclub, with a small space for the band, tables set close to the stage, and lighting (designed by Jimmy Englekemier) subtly positioned to give the beaten ambience of a late-night cabaret. The backing band consists of DeAnte Haggerty-Willis on guitar, Brandon Lee Harris on bass, Keith Butler Jr. on drums, and is led by the incomparable Mark Meadows on piano.

The entire band is terrific, and gives a rousing performance before Holiday takes the stage. And Meadows, playing Holiday’s accompaniment Jimmy Powers, is electric. You’d be perfectly content, as you watch the band perform that opening number, to listen to them for the entire show. And then Billie Holiday emerges.

Holiday is played by Iyona Blake and, from the moment Blake walks into the light, she embodies the singer. Dressed in blinding white like a tortured ghost, jewels flashing from her ears, neck, and wrist, standing before the microphone with a determined weariness, you look at Blake and the band and the small stage and you’re taken from sleepy Falls Church to 1959 South Philadelphia, one of the last performances Holiday would give before her death months later. Blake’s voice captures the faded resilience of Holiday’s later qualities, (famously heard in the classic album Billie Holiday at Storyville) when her voice would occasionally fail her, but her power and emotion pushed through.

Lady Day at Emerson’s Bar and Grill is a mix of music and monologue, with the singer regaling the audience, between songs, with stories about her life. Blake (as Holiday) never seems fully sober when she steps away from the microphone, and her stories sometimes have a rambling quality and incoherence that, nonetheless, contain poignant or humorous insights about Louis Armstrong, Bessie Smith, her mother, her father, her husbands, and race. Her left arm is held stiffly, and sometimes trembles. When her face freezes in grief, the audience does as well. She often steps away from the stage, even once walking into the crowd. The entire performance is pained and mesmerizing, but there are no better moments than when Blake sings Billie’s best-loved songs. The room turns blue when her anguished voice, after describing her relationship with her mother, sings a crushing rendition of “God Bless the Child,” and there is dark unforgiving power in the scathing “Strange Fruit,” a song whose lyrics still remain unparalleled in their savage damnation of American racism.

Iyona Blake is truly exceptional, and watching her brings to mind of the work of Anna Deveare Smith, and how seamlessly she slips into a character. Her pained expressions bear the hardships of Holiday’s life – the physical, often sexual violence she suffered; the betrayals of love and friendship and management; the naked hate of racism; the haunting desperation for drugs. At first sight, we believe we are seeing the legend; as the musical ends, Blake has become the woman, vulnerable and alone, clinging to the edge of life.

There’s a trust we have in our most celebrated artists, a trust built on the understanding that they have realized and expressed something unique. Often, that realization is both beautiful and disquieting. Billie Holiday was never better than when she sang about despair; maybe that’s why we relate to her. Holiday is every dying tradition that didn’t understand it was dying. She’s jazz. She’s southern pride. She’s often love. She’s youth and she’s nature and she’s laughter and she’s America, singing one last broken song into the night.

Fans of Billie Holiday – music fans, in general – would be remiss not to see what the team at Creative Cauldron has accomplished.