Stick Fly is a boiling stew of classism, colorism, parent-child dynamics, unspeakable secrets, and marital choices. With a cast every bit the equal of Lydia R. Diamond’s Broadway-produced script, you can feel the energy and depth of characterization this dynamite show delivers.

Stick Fly, initially produced by famed singer Alicia Keys, is ostensibly about a wealthy Black family, the LeVays, gathering for a restful weekend in Martha’s Vineyard. The LeVays are the type of Black folks that vacation in Aspen, Colorado, and hold M.F.A. degrees. But beneath the LeVays’ uppity surface is a weird dance of family dynamics that come forth when two of the sons, Kent and Flip, bring home their would-be spouses to meet their father Joseph, who has demons of his own to extinguish.

Directors Kelly Chauncey and Kashi-Tara, of ANKH Repertory Theatre, made excellent use of their actors and of the proscenium stage and space within Gaithersburg Arts Barn – some of the actors made entrances from the house. Lena Chaudrey’s set went quite far upstage, and featured many details, including a refrigerator full of food, a clothes-trunk coffee table, and faux Romare Bearden paintings on the wall. The stage-left room meant to be a separate beach house sported an impressive abstract painting. However as far as props went, I did not like the Washington Post paper showing up in the state of Massachusetts.

Into these environs stepped one Taylor Bradley Scott, Kent’s girlfriend and an entomologist who observed the LeVay family similar to the way she observed the common household fly in her work. Described by one of the characters as “freakishly smart, and maybe a little weird,” Linaḗ Bullock’s performance as Taylor was spot on and gave the audience Taylor’s full spectrum of emotions. Bullock performed earlier with ANKH Repertory Theatre in The Wiz.

It became evident as the play progressed that Taylor and Kimber, Flip’s lady, didn’t like each other. Taylor identified with lower class Blacks and prattled on about the dangers of pointing out racial inequalities. Kimber was a “straight-up” WASP, not Italian as Flip had bragged earlier. Kimber, who worked with inner city kids, was a white lady not afraid to discuss race. Allison Bloechl brought verve and spontaneity to her role.

Flip was a plastic surgeon and a braggart. Flip’s dilemma was what to do about a secret past he shared with one of the other characters. The interracial mix of Chauncey and Bloechl was seamless and unforced. Chauncey gave Flip plenty of pathos, in addition to co-directing the show.

There was a particularly strong scene in the beach house between Kent (a.k.a. Spoon) and Flip centering around a devastating revelation. Mack Leamon, (who also excelled in Hard Bargain Players’ Radio Golf) made his every scene as Kent grade A. Leamon shared a racy biochemistry with Bullock as well.

The LeVays’ college-bound maid, Cheryl, played by Breana Thomas (a B.F.A. Acting candidate at Howard University), carried enough angst to rival a Eugene O’Neill play. It was Cheryl who had the most interaction, by phone, with the unseen, and quite ill, Mother LeVay (Joseph’s wife), a well-educated scion of the Whitcomb family. In this show’s backstory, the mother’s great, great grandfather saved a white man’s life, causing that man to cede her family the land in Martha’s Vineyard.

Dr. Joseph LeVay, as played by Tyrell Martin, was stoic and hard to know – an enigma with a secret buried inside. His body language alone carried many scenes. He described his loved ones as “a family of mirthful dysfunction.” I was impressed by his white sweater, thanks to Costume Designer Rawlins.

The word-of-mouth this play will send out will make it a stupendous hit. Stick Fly is not only a must-see, but a have-to-see. 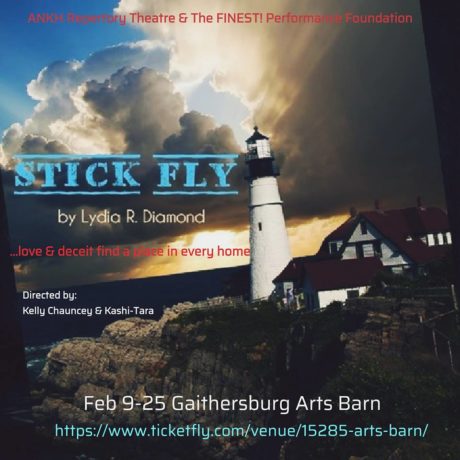