Marking the bicentennial of Mary Shelley’s classic horror novel of 1818, Frankenstein, a new musical with book, music, and lyrics by Eric B. Sirota, focuses less on the monster and more on the man inside, who longs for acceptance and love. Presented by John Lant, Tamra Pica, and Write Act Repertory, Clint Hromsco directs the production, which has recently announced an extension of its Off-Broadway run at St. Luke’s Theatre.

Inspired by the epistolary framework of the original novel, Sirota employs the framing device of recounting Dr. Victor Frankenstein’s backstory and explaining his desire to conquer mortality, after the premature death of his mother, by creating new life from the old body parts of corpses, reanimated with electricity. Sirota supplements his adaptation with his own original score, combining pre- and post-show interludes of synthesized electronic compositions with narrative songs and eerie mood-setting music that recalls the iconic 1931 horror film starring Boris Karloff, performed live on keyboard by Music Director Austin Nuckols.

Erick Sánchez-Canahuate brings heartfelt emotion and humanity to his portrayal of the infamous Creature, along with a strong and expressive voice that captures the torment of his soul, as he sings his “Narrative,” questions “Why?,” and resolves to be “alone never again.” His sensitive and moving performance is a singular highlight of the show.

Unfortunately, the rest of the cast is not as convincing in delivering a believable connection to the familiar characters or their feelings, due in part to Sirota’s simplistic dialogue, trite lyrics, forgettable tunes, and unimaginative rhymes (e.g., “Vitruvian man” with “the beauty of man”). In addition, their mostly fine vocals (Jon Rose as Victor and Amy Londyn as his love Elizabeth are generally mellifluous) are too often overpowered by the emphatic music. Hromsco’s direction is at times stilted, with abrupt transitions between scenes and songs that impair the fluidity of the narrative, and other times borders on melodrama, with histrionic death scenes of Elizabeth and Victor’s best friend Henry (Stephan Amenta) that suffer from overkill. A contrived attempt at comic relief, with innkeepers (Adam Kee and Cait Kiley) affecting an incongruous New York accent, falls flat.

The show’s eye-popping design represents a strange synthesis of the 19th-century and now. Costumes by Jennifer Anderson and a set by Matthew Imhoff create historicizing evocations of Shelley’s Romantic era, punctuated by Elizabeth Howell’s naturalistic sound effects of storms and the crackling of electrical currents. But lighting by Maarten Cornelis employs an anomalous Pop-style palette of unnatural high-key hues throughout the scenes and in the background, seen through the central French doors of Imhoff’s traditional architecture. Despite the decidedly post-modern illumination, among the most imaginative segments in the production is the re-enactment of an episode of murder and retribution in the form of a shadow play, with figures silhouetted against Cornelis’s backdrop of saturated color, staged within the patio doorframe.

While Sirota’s interest in the theme of a scientific experiment-gone-wrong is not surprising (in addition to composing and writing the work, he is a research scientist with a PhD in Physics from Harvard University), and his moral of the universal need for love and compassion is a valuable one, this musical adaptation of Frankenstein lacks the overall depth, tension, fluency, and spark of originality that made Shelley’s story a classic. 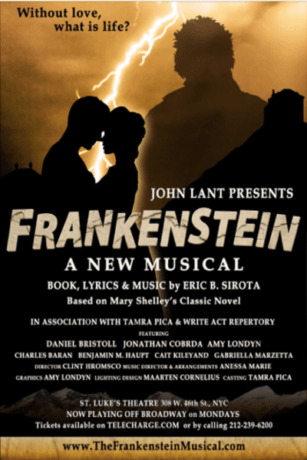