The Port City Playhouse production of The Boys Next Door is playful, yet provocative.

This community theater, operating out of the Sleepy Hollow United Methodist Church in Falls Church, VA, produced a remarkably entertaining and enjoyable production of Tom Griffin’s The Boys Next Door. The action and sentiments were mostly heartwarming, but at times heartbreaking. In his director’s note, Kevin Sockwell hoped that “we will cherish the life we lead with just a touch more joy,” and his direction engendered just that sentiment with the well-paced line delivery and endearing character portrayal, both of which kept the audience laughing.

The Boys Next Door depicts the daily life of four mentally challenged roommates living in a community home under the part-time supervision of a social worker. The roommates are: Arnold (John Wakefield), who describes himself as “nervous” and who packs his bags for Russia when things don’t go his way; Lucien (William Jeffreys), who is the most childlike – can only partially recite the alphabet and offers buttons to Barry for golf lessons; Norman (Matt Williams) who works at a local donut shop and has gained significant weight sampling the goods; and Barry (Michael Schwartz), who has delusions of being a golf pro to cover the pain of his abusive past. Jack (Chris Galindo), the social worker, is becoming burned out by the job and the accompanying perception that the “boys” don’t ever change, even though he has been trying to help them for years.

The play is funny while not being demeaning because the manner in which the four roommates deal with life’s issues is humorous, but could easily reflect the way any human might handle a similar situation. For example, when the four developmentally disabled roommates kill what they think is a rat, but it turns out to be a pet, they avoid taking responsibility for the act and pretend they know nothing about its disappearance. Sometimes their behavior is a model for all humans to emulate, as in the scene when Norman, after refusing to give his girlfriend, Sheila, his own set of keys gets a matching set of keys for Sheila to make her happy.

Laughter every few minutes offsets the poignancy of the piece. The situational comedy works well because the four actors playing the titular roles depict the innocence of children, like when Lucien proudly shows off his library card and “reads” his full name, “Lucien P. Smith” on the card’s face, or when Norman hides donuts under his shirt because he knows that Jack won’t approve. It is a thought-provoking play because it depicts acts with which all humans might identify. For example, Arnold is bullied into shining his coworker’s shoes and Barry is intimidated by his father.

The four actors make us believe that they are developmentally impaired. John Wakefield (Arnold) stomps his feet and speaks his non-sequiturs quickly and convincingly, William Jeffreys (Lucien) smiles widely and hops around in a childlike manner, Matt Williams (Norman) holds his arms up near his chest, shuffles his feet and tilts his head when nervous, and Michael Schwartz (Barry) becomes withdrawn when faced with crisis.

The most moving and dramatic scene is Lucien’s lucid, eloquent soliloquy in the middle of the second act as he faces a Senate committee that is considering his situation at the group home. The monologue gives us insight into Lucien’s inner dignity and what he would say if his intellectual abilities were more advanced. William Jeffrey’s delivery of his lines was not overdone, but poised and authentic. Chris Galindo (Jack) looking off into the distance, frozen, and the muted spotlights during this scene perfectly matched the touching tone.

The production could be improved by updating the terminology from the dated script, adjusting the depiction of Jack, the social worker who doesn’t seem “burned out,” and toning down the loud music during the dance scenes. In this production, Barry is termed schizophrenic and Lucien “retarded.” The play would be more refined without labeling the characters’ ailments. (For example, the symptoms associated with schizophrenia have changed several times since the play’s creation and the current symptoms don’t seem to match Barry’s behavior). Regarding the social worker’s demeanor, Chris Galindo (Jack) is constantly smiling and commenting on the “boys” in a condescending manner. If he were truly burned out, he would find it much more difficult to maintain a smile and if he truly cared for these men, his tone would not be as condescending. Finally, during the dance scene, many of the conversations (between Jack and Norman, for example) were drowned out by the ABBA music (while a delightful selection, it was a bit too loud).

Port City Playhouse’s production of The Boys Next Door is like a donut made with abundant humor and a sprinkling of poignancy – I wonder if Norman would eat a donut made out of those components. If such a donut tasted as good as this production felt, I bet he would. 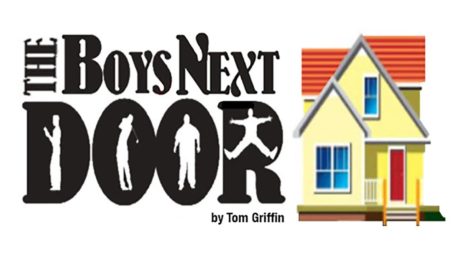