Amy Oestreicher was a theatre-obsessed teen until her world changed overnight after waking from a coma, caused by her stomach literally exploding. After 27 surgeries and six years being unable to eat or drink, Amy’s digestive system was miraculously reconstructed. She learned that the human spirit heals through “gutsiness,” gratitude, and humor. An inspiring comedic take on a true near-death experience, told through song and story, Gutless and Grateful will be playing as part of the Atlas Intersections Festival on February 23 and 24.

We had a chance to chat with Amy and explore the ways in which her experience, including her PTSD (post-traumatic stress disorder) diagnosis, has influenced the show and her work as a theater artist. 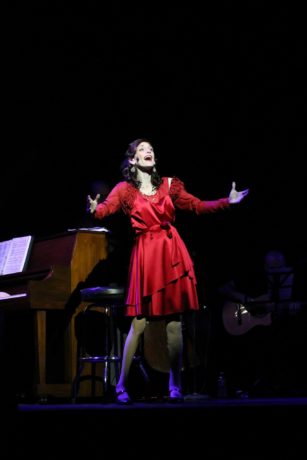 Can you tell us a little bit about Gutless and Grateful?

It’s the one-woman musical about my “detoured” life – my story specifically, yet one that everyone can relate to. And yes, it’s a comedy about trauma – and the joy that comes from the gifts you can reap once finally on the other side!

How it started: I grew up thinking my life was a musical. Call it the “theatre bug”, call me a “drama queen” or a great big ham – I lived for the world of the stage. For me, singing and acting were ways I could connect with the world around me. I’ve always been warned not to put all of my eggs in one basket, but theatre ran through my veins – it was all I thought about, lived and dreamed.

Dire circumstances felt much more long lasting; when at 18 I awoke from a coma. Although the medical staff—that suddenly became everyday faces—was more concerned about keeping my organs and me alive, I was still trying to grapple with one frightening new concern: Would I ever be able to sing and dance on stage again?

With a ventilator and a tracheotomy, I couldn’t even talk. From months of bed-rest, the first time I was able to stand up, I was alarmed at how they trembled, as if my legs were Jell-O. I lost the energy to even think about what I loved. Being unable to eat or drink in these new medical circumstances turned my once-steady focus to mush and irritability.

With time, patience, and dogged determination, I was eventually discharged from the hospital. What I’m glossing over are the multitudes of surgeries, setbacks and frustrations, because what was the most important was my passion – I never forgot how I missed the stage.

Eight years after my coma, I was finally headed towards a life of medical stability. I learned through experience that things can heal with time, and that’s not always the prettiest or easiest way. It was an extremely difficult journey, yet when I started to put together a musical of my life, things felt like they had happened for a reason. Now I have a story to tell, a message to share.

My one-woman musical autobiography, Gutless and Grateful, started out as stapled pages of my journal – a few pages from the thousands of journal entries I had completed when unable to eat or drink for years. Through the songs, I could allow myself a safe place to feel the charged emotions I was still trying to process from years of medical trauma.

Through Gutless and Grateful, I’m sharing my story and helping others find the gifts and the gratitude in the hardships. And in healing other people, I heal my own self a bit more every day. I’m not there yet, but just like my show – I’m on the road.

In what ways has your experience changed the way you regard others who suffer from chronic illness or emotional challenges such as PTSD?

Where to start?! I didn’t know what PTSD was until much later – or illness, really. I grew up thinking an “illness” was either a fever or croup. Illness was a stuffy nose – a sick-day, an excuse to miss a day of school. At 18 years old, “illness” took on an entirely different meaning. Illness meant waking up from a coma, learning that my stomach exploded, I had no digestive system, and I was to be stabilized with IV nutrition until surgeons could figure out how to put me back together again. Illness meant a life forever out of my control and a body I didn’t recognize. 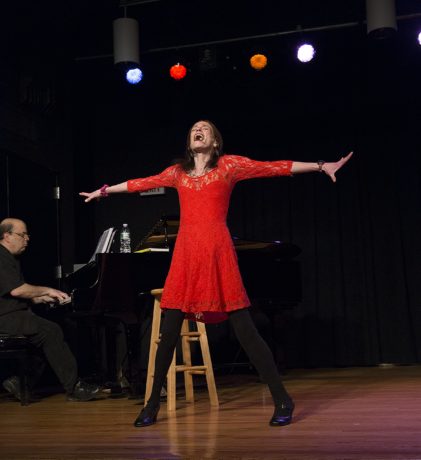 Does your PTSD impact you in ways that are not discussed in the show?

I’m working on a new project which discusses the themes in more depth, but I don’t really have a chance to go into everything I’d like to – mostly the details of how sexual assault can cause the “freeze” response, and how by finding alternative ways to mobilize that energy, we can find healing. Right now, I speak about that, create art about that, and am working on a new solo musical about that! My sexual assault happened right before my coma from a trusted mentor, and it took years for me to start facing it and healing from it.

When a person endures trauma, a part of them  becomes “wounded,” and that it is important to listen to and learn from this wounded self. I’ve learned it is best to embrace your wounded self instead of hiding it or wishing it away. I was sexually abused starting at the end of my junior year in high school. I was caught off guard— in such shock— that the abuse continued until the winter of my senior year. I was totally numb during that time. As a result of the abuse, I stayed in this frozen state until April 2005. Then I was assaulted by a medical trauma before I even had time to heal from the first trauma.

When you undergo any kind of trauma it causes a disturbance in your energy flow which makes you unable to feel those emotions that once came so naturally at a time. My body stopped breathing the same way it used to – a big knot of tension evolved in my chest and remained there like a cocoon. My thoughts became corrupted – I couldn’t think in my naturally poetic way. Suddenly my world became rigidly controlled by numbers and mechanical, compulsive thinking. It becomes difficult to deal with everyday life because you’ve hid your soul in a dark corner so it doesn’t have to face the dangerous world of the Trauma. Without your soul, you are only half a person, a machine who is constantly running from reality. I put up a daze like four safe walls that protected me from being consciously present in the abuse, and that daze stayed with me with or without him. I lived in a world separate from everyone else.

To heal, you have to tell your story – the story of your wounded self. By telling it and remembering, you literally re-member: you re-assemble yourself, and your body is able to realize that it is no longer in the world of the trauma you can flow back into life.

One thing I did to help my wounded self was write Gutless and Grateful. It was a way I could express what I had been through to the outside world, and allow myself to feel what I had blocked off for so long.

Do you have any advice for those in the theater community who are struggling with PTSD?

Turn it into art. Share your story in any way you can, even if for years it’s for your eyes only.

How long has it taken you to come to terms with the challenges you faced which led you to develop this show?

It took me 2 years to write it and it has changed as I’ve had more unexpected detours along my path – those include a 27th surgery which created long term physical damage, a divorce, a broken leg from a hit and run, and the possibility of a transplant. As long as we have art and creativity, we can always create our own lives and find some feeling of control.

Do you believe there is still a stigma against those in the theater community with PTSD, or with those who are not combat veterans who have PTSD in the wider culture?

I did initially, but I am happy to see the conversation opening up— finally! At first, I felt self-conscious sharing my story of being sexually abused by my voice teacher in Gutless and Grateful, but now I’ve expanded on it and share it proudly— knowing just speaking about it might be able to help someone else.

My life changed when my stomach exploded ten years ago. PTSD is something I still struggle with because my traumas happened to me, have affected me, and will always be a part of me. I’ve learned how to thrive in spite of what has happened to me, and for the first time, my life feels bigger than my past. I’ve found healthier ways to deal with memories, flashbacks and emotions. To live a healthy thriving life, I’ve had to befriend my past, embrace my experience, and express what had happened to me. I needed to tell my story to heal.

Are you working on anything else that you’d like to discuss? 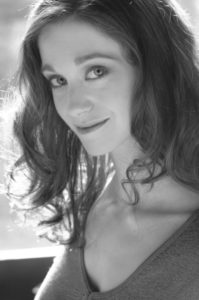 I thought it might be an interesting concept to explore the idea of being “frozen” – how when I was molested, I did not fight or flee. I froze – I turned into a numb robot out of pure shock. It was the only way I knew how to try to protect my innocence and once-beautiful and magical world.

When in I was in a coma for all of those months, I was “frozen” in a different sense. In a way, my mind was more active than it was when I was trying to shield myself from my voice teacher. I remember having colorful dreams of being in an underwater fantasy. In a way, I felt more protected in a coma and waking up from one then I did when I was fending for myself against my terrifying abuser. I felt like there was no one to help me and I didn’t know how to stop him, whereas when I was coming out of sedation, I felt trapped, yet protected and safe.

I’ll be premiering an excerpt from this show at the Museum of Jewish Heritage in NYC during the Untold Stories of Women’s Voices Festival on March 20, 2018.

Gutless and Grateful is plays February 23 and 24, 2018 at Atlas Performing Arts Center— 1333 H Street NE, Washington, DC as part of the Atlas Intersections Festival. Use discount code GUTLESS for 10% off or GRATEFUL for $5 your ticket, which can be purchased online.