Through the hand of fate, two lonely and damaged strangers have been brought together in an isolated cabin in the Alaskan wilderness, each suffering the effects of familial trauma, the devastation of love and loss, and the resultant depression that racks their psyches. Presented at The WorkShop Theater by Art of Warr Productions in association with Ruddy Productions, Cindy Lou Johnson’s 1989 two-hander Brilliant Traces considers the life-affirming impact of compassion on deeply-troubled people who have lost their way, set adrift by the numbing pain that haunts them.

Fully committed performances are delivered by Alyssa May Gold as Rosannah DeLuce, a runaway bride from Arizona who just happens to end up in a remote part of Alaska after unconsciously driving for weeks, and Blake Merriman as Henry Harry, the solitary owner of the lone cabin she comes upon after leaving her dead car and hiking for miles through a blizzard. She is loquacious and volatile, prone to delusions and in desperate need of someone to care for her; he is silent and attentive, a concerned caregiver who has secluded himself from society, far away from his job as a cook on an oil rig. Both are grief-stricken and embittered by the turns their lives have taken, “unsocialized” in their behavior, achingly vulnerable, and unsure if life is worth living or love is worth sharing. As they converse, they also confront, challenge, consider, comfort, and begin to make genuine contact with each other, capturing a wide range of heartrending feelings, embracing outbursts of rage and sadness, and uncovering the nature and depths of their despair.

Johnson’s story wavers between true emotion and psychological displacement, while combining elements of romantic tragicomedy, mystic realism, and a self-help therapy session. The vacillating and sometimes heavy-handed script is laden with symbols and metaphors (shoes that trigger agonizing memories for Henry; the whiteout of the storm as a parallel to the blackouts in Rosannah’s consciousness; her feeling of hovering above the car because, mentally, she’s not in the proverbial driver’s seat; and her off-beat references to extra-terrestrials). And it is too often weighed down by the recurrent use of “What do you mean?” and frequent passages of unnecessary reiteration (“A couple of days.” “A couple of days?” “Yes.” “Oh my God . . . a couple of days”), which only serve to slow the pace of the narrative. But Director Joshua Warr successfully builds the inherent tension between the two characters, making us initially unsure of Henry’s intentions towards his unexpected visitor, then slowly revealing their crippling backstories and the Freudian elements that will provide a connection between them (only the transition from the scene of Rosannah’s arrival to her awakening two days later lacks fluidity, with an awkward removal of her wedding apparel from the stage between segments).

Matthew S. Crane’s rustic set design of a simply furnished wooden cabin surrounded by snow effectively transports us to the outlying locale. Lighting by Paul T. Kennedy convincingly evokes the look of a winter storm through the windows, accentuated by the sound of the howling winds, but the shifting illumination while Rosannah sleeps lacks a period of full daylight, and lights flashing to the beat of her heart later in the show are a surreal distraction. Costumes by Todd Trosclair define the situations of the characters, though it’s unclear as to why the clean sweatpants and dry boots that Henry provides for Rosannah in his cabin would fit her as well as they do.

Perhaps the most important lesson of Brilliant Traces is that there is someone for everyone, a kindred spirit who will understand and help to heal the scars that linger. It’s a hopeful message that is well-delivered by Art of Warr Productions’ empathetic actors. 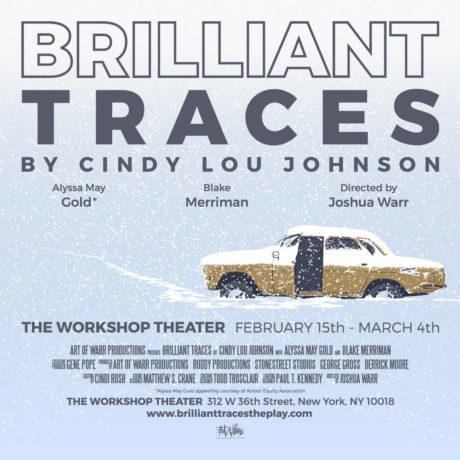