(DC Metro Theater Arts is pleased to publish this remarkable first-person history on the occasion of the 200th anniversary of Frederick Douglass’s birth and Theater Alliance’s production of Idris Goodwin’s play The Raid, an imagined confrontation between Frederick Douglass and John Brown.)

The year was 1859. My great-great-grandfather John White Hurn— who would later become a well-known portrait photographer—was working as a telegraph operator at the time in Philadelphia. Here is the exciting story in his own words, as published in a leading journal circa 1893:

“‘Yes, sir; I am the man who saved Fred. Douglass’ life when “Old John Brown” was captured at Harper’s Ferry. I suppressed a dispatch addressed to the sheriff of Philadelphia, instructing him to arrest Douglass, who was then in that city, as proofs of his complicity in the memorable raid were discovered when John Brown was taken into custody.’

“Seated on the doorstep of his cozy cottage, a few miles outside of Vineland, New Jersey, was John W. Hurn, a pleasant, gray-bearded man of sixty, who, when questioned, answered as above respecting the aid rendered by him to the noted abolitionist.

“‘At that time, I was a telegraph operator located in Philadelphia,’ continued Mr. Hurn, ‘and when I received the dispatch I was frightened nearly out of my wits. As I was an ardent admirer of the great ex-slave, I resolved to warn Douglass of his impending fate, no matter what the result might be to me. The news had just been spread throughout the country of the bold action of John Brown in taking Harper’s Ferry. Everybody was excited and public feeling ran high. Before the intelligence came that Brown had been captured, the dispatch I have mentioned was sent by the sheriff of Franklin county, Penn., to the sheriff of Philadelphia, informing him that Douglass had been one of the leading conspirators [this was untrue], and requesting that he should be immediately apprehended.

“‘Though I knew it was illegal to do so, I quietly put the dispatch in my pocket, and, asking another operator to take my place, started on my search for Fred. Douglass. I went directly to Miller McKim, the secretary of the contraband, underground, fugitive railway office in Philadelphia, and inquired for my man. Mr. McKim hesitated to tell me, whereupon I showed him the dispatch and promised him not to allow it to be delivered within three hours. I told him I would not do this unless he agreed to get Mr. Douglass out of the states. This he readily assented to, for it was his business to spirit escaped slaves beyond the reach of the authorities. I returned to the telegraph office and kept a sharp lookout for similar dispatches. None arrived, however, and when the allotted time expired I sent the belated message to its destination.

“‘In the meantime, those entrusted with my secret saw Mr. Douglass and urged him to leave the town as quickly as possible. He was loath to do so at first, but the expostulation of his friends overcame his objections, and in an hour he left on a railroad train. He reached his home in Rochester, New York, in safety, destroying the compromising documents, and then packed his gripsack and started for Canada. It was fortunate for him that he left so soon as he did, for immediately after his departure from Rochester his home was surrounded by officers.’ ” 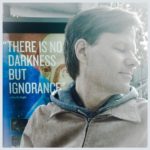 Joseph Hamilton likes ideas, cats, solutions, and bravery. Even though he’s from California, he has accepted DC as his home. He sometimes tweets at @EastWestJoseph.

Review: ‘The Raid’ at Theater Alliance by John Stoltenberg