Attention Anglophiles: If you loved The Queen, and if you avidly follow The Crown on Netflix, then by all means, join the audience for The Audience at the Little Theatre of Alexandria (LTA). All three were written by Peter Morgan, who has become something of a specialist in portraying the royals.

The play does not have a plot, in the usual sense. Rather, it consists of a series of conversations between Queen Elizabeth II and eight of the thirteen prime ministers who have served since her 1952 accession to the throne (Alec Douglas-Home, James Callaghan, Harold Macmillan, and Edward Heath did not make the cut, and the play was written before Theresa May took office). Prime ministers do traditionally have 20-minute conversations with the queen on most Tuesday evenings. The content of these conversations (“audiences”) is confidential and unrecorded, so the script depends on what Morgan imagines they might have been. To follow the subject matter of some of these discussions, it indeed helps to be an Anglophile, or at least versed in modern British political history.

The proceedings are introduced by a character called the “Equerry” (Paul Donahoe), a sort of narrator/tour guide/servant who describes the largely unseen surroundings and occasionally fetches things for Elizabeth. While Elizabeth ages over the course of her reign, the Equerry for some reason does not.

The queen is, of course, the central character, originally played by Helen Mirren in both London and New York. Nicky McDonnell’s Elizabeth is consistently self-possessed, quick with a witty one-liner (there is a good deal of humor in the play), and politically aware and astute. She changes her body language and posture subtly between her 20-something self, meeting Winston Churchill when she first takes the throne, and her 80-something self by the time she greets David Cameron. At times, her body language appears less formal than one would expect of the queen, however.

In an appropriately understated way, McDonnell conveys her character’s frustration in her role as a sovereign without political power who must be friendly without being a friend. Her political instincts are characterized as being soft left, while holding fast to her royal privileges and the God-given nature of her position. In The Audience, the queen seems the sort of monarch the British might wish to have, a bit like Jed Bartlett was the sort of president Americans might wish to have.

Around this central figure swirl the ever-changing residents of Number 10, who do not appear in chronological order. As Churchill, Robert Heinly is gruff and commanding, instructing the young queen in how to operate the family business. Harold Wilson, portrayed by Will Cooke as a refreshingly informal, warm, man-of-the-people sort, is clearly Morgan’s favorite P.M., and the play suggests that he was Elizabeth’s as well. His last scene with the queen is the most touching of the evening for both actors.

John Major (Brian Lyons-Burke) and Gordon Brown (Kirk), both quite distressed, benefit from Elizabeth’s apparent skill at being therapist-in-chief.

Some of the other heads of government do not come off as well, and the accuracy of Morgan’s portraits may be questioned in some instances. Did Tony Blair and David Cameron (both played by Richard Isaacs) really reach the nation’s highest political office as callow young men reminiscent of junior staffers on Capitol Hill? Would Anthony Eden (Robert Heinly) – admittedly a failed prime minister because of the Suez Crisis – really speak to Elizabeth like a thuggish bully?

The scene with the most dramatic fireworks is a confrontation between the Queen and Margaret Thatcher (Janette Moman), who comes to her audience loaded for bear over a press story concerning the palace’s reported unhappiness with her South Africa policy. With her nose literally in the air, Moman’s Thatcher berates and patronizes the Queen, who of course maintains her composure. Would the Iron Lady – historically a stickler for formality in her rather distant relationship with the queen – really have acted that much of a dragon lady to Elizabeth? Morgan may have taken dramatic license a bit over the top here.

The final character is Elizabeth as a child (Evie Graham Jewett). At times, she is mostly a device to take the stage for a few moments while Elizabeth makes a costume change. As the play goes on, she and her adult-self have conversations intended to illustrate the queen’s growing understanding of her role. Jewett’s second act monologue drew deserved applause from the audience.

The set, designed by Ken Brown, is quite simple: two yellowish chairs separated by a small table, backed by arched draperies upstage. While it does not suggest the opulence of a palace (even as described by the Equerry), the setting is perfectly functional. The set features a nifty turntable that helps ferry actors to and from entrances, and which works very smoothly. Ken and Patti Crowley’s lighting design is likewise functional, not calling attention to itself, playing varied colors on the draped arches and successfully using area lighting in the main playing area. The sound design featured brief but effective snatches of background music – a few more might have been desirable – including a bit of Handel’s “Zadok the Priest” in the coronation scene that concludes the first act.

Elizabeth undergoes frequent costume changes, as the play zigzags across the decades. The costumes, designed by Ceci Albert and Lisa Brownwood, varied in color, though little in style (except one sparkly outfit that the queen wears for a photo op). The tailoring of some of Elizabeth’s costumes and the drape of their fabric was less precise than one might hope for a queen. 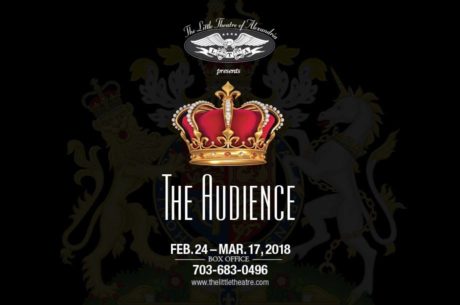