Just concluding his comic roles in the Walnut Street Theatre’s national touring production of Ken Ludwig’s Baskerville: A Sherlock Holmes Mystery, with its final performances this week in California, Virginia, and Maryland, Barrymore Award-winning Philadelphia-based actor Dan Hodge is about to begin previews for his New York debut with Dogs of Rwanda, in its Off-Broadway premiere this month at Urban Stages. The one-man play, written by Sean Christopher Lewis, is an intense and disturbing reflection on the 1994 Rwandan genocide, in which 70% of the Tutsi tribe – nearly a million people – was killed by members of the Hutu majority. In it, Hodge portrays the author of a book about the horrifying atrocities, which he witnessed firsthand, 20 years earlier, as a sixteen-year-old church missionary to neighboring Uganda.

I spoke with Dan between the closing dates of Baskerville, to discuss his background with the upcoming New York production of Dogs of Rwanda, the relevance of its theme, and his personal views on the character he plays.

Deb: You have a history with this particular play. When did it first come to your attention and how did you become involved in performing it?

Dan: Oh, it was lovely! I didn’t know anything about it until around this same time last year, when Seth Rozin [Co-Founder and Producing Artistic Director of InterAct Theatre Company in Philadelphia] contacted me and offered it to me. Sean Lewis had been a Playwright-in-Residence with InterAct – he lived in Philadelphia around 2009-10 – and I had worked with the company many times, so I knew him. Usually Sean performs the show himself, but he said to Seth, “You should get Dan to do this,” and so he did!

What was it about the subject that attracted you, both as a person and as an actor?

What sparked my interest immediately is that I’m always attracted to human stories of the smaller personal journey that leads into the greater narrative.

What qualities in this character are especially compelling for you?

I like the fact that he’s not perfect. He’s a very complicated individual, and at times unlikeable. I like it when characters make grand attempts and fail; there’s something about the humanity that reveals.

Although the theme is focused on a specific event in late 20th-century history, why is it universally relevant for current audiences?

I think the danger that exists today of racial or religious-based genocide is something that we always have. Any opportunity we get to engage with the human cost of intolerance is important.

How have your past audiences in Philadelphia responded to the play?

It was quite well received. It’s a challenging piece, and it’s an ugly piece, but audiences really got on board with that. I have to say that much of the success in Philadelphia was due to Maura Krause, who directed the show and whose work cannot be estimated highly enough.

Aside from you, will the New York production feature any of the same artists from InterAct, or will it be a new team and design?

It’s completely new. What happened was the theater company in New York, Urban Stages, has a relationship with Sean, and they wanted to produce this play. Sean wasn’t available to perform it, so he told them to hire me. I’ve been touring with Baskerville, and I haven’t had the opportunity to meet the Directors Frances Hill and Peter Napolitano yet, or to visit the theater, but I’ve had some phone conversations with the company, we’ve exchanged emails, and they just sent me an image of the set, so I know the design will be quite different. The production at InterAct was very pared down, presented in repertory with another show, How to Use a Knife, so I was just performing Dogs of Rwanda in front of that set. This production will include projections, and live music composed and performed by Abou Lion Diarra, a native of the Ivory Coast in West Africa, so there will be more visual and aural components to augment the story being told.

This is not your first one-man show; your superb adaptation and performance of Shakespeare’s The Rape of Lucrece was a highlight of the 2014 Philadelphia Fringe Festival. What do you find most rewarding and challenging about the solo format?

I love solo work because of the immediacy of contact with the audience. You can’t live in denial of them, they become implicated. Following its Fringe premiere with the Philadelphia Artists’ Collective [for which Hodge serves as Co-Founding Artistic Director], The Rape of Lucrece has had a regional life. I’d love to bring that one to New York, too!

As a critically-acclaimed actor who has never before performed in New York, what are you most looking forward to, in terms of your own debut and for the premiere of the play?

I’m looking forward to seeing what a New York audience will do with this. Personally, I’ve sat in plenty of New York audiences, so I’m curious to see how the other half feels, being on stage here instead of in the seats.

You did out-of-town work earlier in your career, before settling into a home base. Is it something you’ve enjoyed coming back to, after spending much of the last ten years in Philadelphia?

Yes, I like exploring new locations when I get the chance. I did a lot of regional summer stock when I was making my bones early on. I’ve enjoyed the current tour of Baskerville very much and would like to work out of town more. That said, I miss my house!

What’s up next for you, following Dogs of Rwanda?

I will be directing Oscar Wilde’s The Importance of Being Earnest opening in May at Hedgerow Theatre Company, and then in June I’m in the PAC’s spring show Maria Marten, or The Murder in the Red Barn, based on the true story of the Red Barn Murder of 1827, in Suffolk, England. So I’ve got a pretty full slate immediately after Dogs of Rwanda closes at the end of this month.

Thanks, Dan, for taking the time to talk to us, and for bringing this important performance to New York audiences. 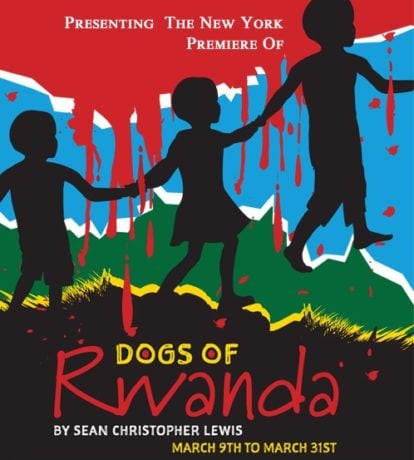