Imagine for a moment that you were a visitor to DC yesterday and you wanted to see a show at the Kennedy Center. You would likely have logged on to their website and received this message: 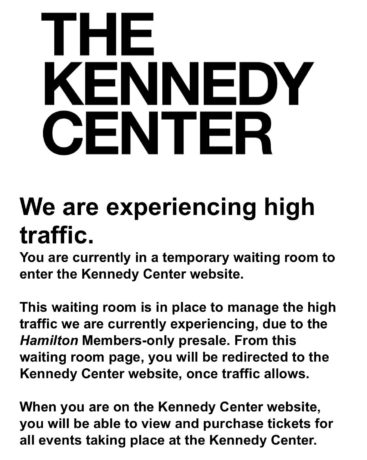 Because yesterday was no ordinary day in the world of DC theater: Yesterday was the day HamilMania officially descended upon the US capital.

A large crowd arrived to buy tickets in person at the Kennedy Center. According to one staff member, the mood for those buying the tickets at the center was “all excitement and giddiness.” (We asked the Kennedy Center for exact numbers on ticket sales but they declined to release that information.)

For the legions of hopeful customers buying tickets online, the process began early in the morning. Members were instructed to log on between 6 and 10 am to be given a randomly assigned number and then asked to wait…. and wait…. and wait…

One lucky member, Laura Griffin from Gaithersburg, MD, logged on at 9:30 am and was assigned number 660. She had tickets in hand by 10:45 am. “I didn’t know how lucky I was at the time,” she said. DC Metro Theater Arts writer Kristopher Zgorski, on the other hand, logged on at 8:00 am was assigned number 17,917. He finally managed to get two decent seats at 4:00 pm after receiving messages indicating that most seats together were sold out and customers should consider buying single seats. 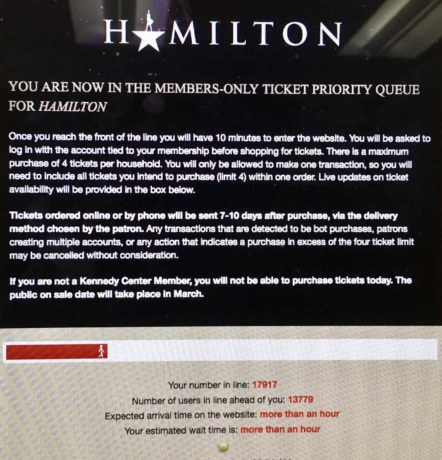 Potomac native Julie Mazzarino, who somehow managed to put in a day’s work as a dental hygienist with her phone in one hand, constantly monitoring her wait time, was hoping to get tickets for her parents. Assigned to number 34,577 in the queue, only $625 premium seats were available by the time her number came up at 8:45 pm. She took a deep breath and bought them. (According to the Kennedy Center’s website, ticket prices range from $99 to $199 with a select number of $625 premium seats.)

Jennie Cottrell, also of Gaithersburg, hoped to buy tickets for herself and her sweetheart. She was only able to purchase single seats as well. “When it came time to check out, I had only one minute left before my session expired, and in my rush, I ended up with two tickets for different dates – which I didn’t realize until I got my receipt. So I did get two tickets, but they’re a month apart. It’s not going to be much of a date night!”

This day-long buying frenzy is likely only a harbinger of what’s to come when tickets go on sale to the general public later this month. The exact on-sale date will be announced by the Kennedy Center 10 to 14 days prior to the sale.

The Kennedy Center is encouraging buyers to be wary of third-party ticket sellers, cautioning that fraudulent tickets were showing up on ticket resale sites long before they had even gone on sale. Their exact warning, as seen on the website: “Purchasing tickets from any other seller or website runs a high risk of receiving fraudulent tickets or paying extremely inflated prices.”