An apt subtitle for Of Mice and Men, adapted from the 1937 novella by John Steinbeck, might be “the futility of hope.” In the small, corrosively lonely, universe of a California ranch during the Great Depression, any human connection, longstanding or brief, will not endure; any hope, however modest, will evaporate; any dream, however fanciful, will be crushed.

The current Maryland Entertainment Group (MEG) production starkly portrays that futility, beginning with the supporting cast. Crook (Andre Brown), the only Black ranch hand, lives in a segregated room in the barn. No one visits him there, and despite his acutely felt isolation, he pushes others away. Bitterly intelligent, Brown’s Crook does not hesitate to scoff angrily at the hopes of others.

Curley (Lawson Cade), whose rampant insecurity manifests as bullying, immediately earns the enmity of the other men at the ranch while alienating his pretty young wife (Anne Hunt). Hunt’s physicality in the role, especially in the first act, is rather flirtatious, the only way she knows of seeking out company. For the men in the bunkhouse, she is a “tart” or a “tramp,” who Candy (Reiner Prochska) – notwithstanding his fond recollection of a long-ago encounter with a prostitute – ultimately blames for her own misfortune. In the play’s misogynistic setting, a woman is an unwelcome menace who upsets the male order of things. Consistent with this view of women, perhaps, “Curley’s wife” is the only identification provided by the script for this character. She is not given a name of her own.

Carlson (Maverick Mckee), assertive but utterly lacking in empathy, badgers the tired, defeated Candy into allowing him to shoot his beloved, if smelly, old dog. Candy lacks the strength to resist; he simply curls up in his bunk in silent grief. Of the ranch hands, only Slim (Rick Burkett) shows some understanding of the feelings and needs of others. In his understated way, he sees, though he is unable to mitigate, the pain of the others. Yosef Penn-Ari, as Whit, and Michael Heyser, as the ranch owner (looking slightly like Jock Ewing), round out the cast in smaller roles.

The ensemble is creditable, but it is the leads who must carry the play. They succeed. Seth Thompson is a voluble and highly energetic George, doggedly determined to protect and control his longtime companion, Lenny (Sean Besecker). To George, Lenny is endlessly frustrating, but he is the one constant in his itinerant life. Lenny, as described by various characters, is “dumb,” “not bright,” and “a nut.” He suffers from short-term memory loss. His emotions – fear of disappointing or angering George, love of petting soft things, rage when attacked or thwarted – are childlike. Crucially, he literally does not know his own physical strength.

Thompson and Besecker realize their characters physically as well as vocally. Besecker is a shambling, yet tentative, bear of a man, contrasting with Thompson’s quick, darting movement. There is tenderness between the two men, shown most explicitly in the comforting touches George gives Lenny immediately preceding the play’s conclusion. Otherwise, there is precious little touching among any of the characters, underlying their isolation.

While George plans, carefully and rationally, how to navigate his and Lenny’s way through a hostile landscape, Lenny remains an innocent. Innocence can be touching; it can also be destructive. Lenny can be seen as a kind of landlocked Billy Budd, whose unwitting anger, when unleashed, injures or kills. Neither rationality nor innocence can prevail in this dark place, however.

George is also a fantasist, soothing Lenny – and perhaps himself – with a story of the lovely homestead they will have some day, where they can grow their own food and Lenny can raise and pet rabbits. For a time, it appears that the fantasy might become real when Candy offers his life savings to join the venture. But then fate intervenes, in the form of Curley’s wife, whose dream is to escape her own lonely life and disagreeable husband to pursue fame and glamor in Hollywood. Hunt and Besecker have one of the most dramatically striking scenes of the play as she shares her frustrations and hopes and Lenny is able to think only of his worries and dreams. Even before the scene turns violent, they talk past one another, conversing but not connecting.

There are two scenes of violence in the play, both involving Lenny: with Curley in the first act and Curley’s wife in the second. While no fight choreographer is listed in the credits, the director (Sam Little) and the actors make the action credible and at moments quite frightening.

Given the very wide expanse of the stage, the company wisely decided to narrow the playing space by partly closing the curtain on each side. The main feature of Renee Carbaugh’s serviceable set design was a peaked board structure representing the wall of the bunkhouse and barn; the first and last scenes were played on a bare stage in front of a scrim.

For the most part, the lighting design (John O’Neil) relied on broad area lighting, though cold spots in the left and right fringes occasionally left actors in semi-darkness. The more specific lighting of the second act scene between Lenny and Curley’s wife was particularly effective. Sandra Miles’ costume designs were appropriate to the time and the hardscrabble place. The pre-show and intermission music set the time period solidly in the 1930s (the inclusion of Yip Harburg’s classic “Brother, Can You Spare a Dime” was particularly fitting). Two minor technical nits to pick: George’s hair is a bit too perfect for a ranch hand working 11-hour days, and a loose-fitting sling would not seem to do much for Curley’s crushed hand, which dangles free and apparently intact in the second act.

The running time of the performance is 2 hours and 22 minutes, including one intermission. 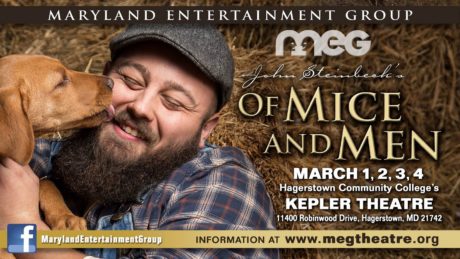