Do you ever wonder about the nature of awareness and the mechanics of perception? Luckily for us, Baba Brinkman does, and returns to SoHo Playhouse with his well-conceived and brilliantly entertaining Rap Guide to Consciousness, a hit in the 2017 Edinburgh Fringe and the latest installment in his signature fusion of hip-hop, humor, and neuroscience.

Self-described as a “white Canadian peer-reviewed science rapper” (a unique and unexpected combination, to be sure!), Brinkman’s stimulating material is the result of his extensive research on the history of the theme and the most recent advances and developments in the study of cognitive psychology, culminating in an original script and lyrics that he submitted to experts in the field (including his wife Dr. Heather Berlin) for their scholarly comments, edits, and approval. The final show is a novel blend of seemingly disparate elements in the arts, philosophy, and science, which holds widespread appeal for audiences of all interests and backgrounds who value talent, intelligence, and creativity. By my calculations, that should be pretty much everyone.

Directed by Darren Lee Cole with a perfect balance of high physical energy and spot-on delivery, the eminently likeable Brinkman alternates his solo performance between segments of rap music and illustrated scientific lectures, incisive jokes and serious ruminations, personal reflections on his own life and direct engagement with the audience. He actively moves around the stage, employing familiar hip-hop moves for emphasis, inserting relatable pop-culture references for easy comprehension of the challenging subject matter, soliciting our opinions on still-unanswered questions of probability and theory, and amazing us with his extraordinary skills at rhyming, rhythm, and free-style rap to a pre-recorded beat.

Exploring the inner workings of the psyche, Brinkman considers such complex topics as free will, artificial intelligence, “Fame in the Brain,” Bayesian reasoning (based on the 18th-century theorem of English philosopher, minister, and mathematician Thomas Bayes), the effects of psychedelic drugs, the presence or absence of thoughts in animals and infants (his rap about his son “Dylan” is an especially funny and tender example of “ignorance is bliss” or “how you [lovingly] dis your newborn for four straight minutes”), and the possibility of the post-mortem survival of consciousness. Brinkman’s inter-disciplinary multi-media presentation is supported by a captivating visual design by Olivia Sebesky, with mind-blowing projections of colorful morphing images, scientific equations, brain-cell activation, and a collection of family photos and videos.

Note to Mensa: If you’re in the market for an Official Rapper, Baba Brinkman is just the right brainiac for you! His Rap Guide to Consciousness offers an ingenious look at the hard problem, filled with information and wit, and set to a sensational hip-hop score. But you don’t have to be a genius to enjoy Brinkman’s show, you just have to love imaginative cutting-edge performance. 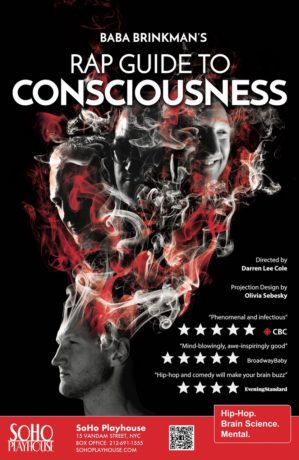