For nearly two decades, the inventive Signature in the Schools education program has exposed Arlington County public high school student actors to highly-charged, real-world issues well beyond the confines of a textbook by allowing them to participate in an original Signature Theatre production.

The Signature in the Schools program, under the leadership of Arlington’s Signature Theatre, gives students the opportunity to assist in developing a newly written play that addresses issues from their daily lives and themes from Arlington County Public Schools social studies curriculum. Signature in the Schools’ past productions have tackled subjects such as the wars in Iraq and Afghanistan, the Baltimore protests after the death of Freddie Gray, PTSD, the Arab Spring, immigration, Hurricane Katrina, the Holocaust, cyberbullying, and Civil Rights.

The latest Signature in the Schools production is 12 Million Footsteps, written by Joe Calarco, Signature’s Resident Director/Director of New Works. Calarco has written the Signature in Schools plays over the past decade.

From an interview with Calarco and Signature marketing materials, it became clear that this year’s show draws parallels between Homer’s The Odyssey and the sufferings of Syrian refugees as they set off on the sea to find safety, as well as United States refugee policies.

So what do Arlington County public high school students do when part of Signature in Schools? Not only do they make up the cast of the production, but they also work as crew, stage managers and occasionally even as co-designers. They take part in a theater “Boot Camp” of sorts. The students are mentored by professionals and are held to the highest professional standards. And here is a most key factoid; before rehearsals with the completed script, cast and crew go through a process where students engage critically with the historical subject matter of the play and develop strong theatrical and ensemble skills. A professional actor is a colleague and mentor for the students.

Performances of a Signature in the Schools play include several evening public performances which are free, and a number of matinee performances for students from throughout Arlington County. Free bus transportation is provided to Arlington Public Schools students.

Calarco’s 12 Million Footsteps has this as its fictional starting point: An executive order has been signed by the President that leads to three complicated and lost individuals wandering on their own homebound odysseys. As one searches for his lost father, another searches for his detained uncle and another searches for a connection to her faraway home. Searching for hope and for home, their lives become entwined with Homer’s ancient text in beautiful and life-altering ways.

This line from Homer’s The Odyssey is a key to the journeys:

Tell me about a complicated man.
Muse, tell me how he was wandered and was lost.”
– The Odyssey,
Homer (translation: Emily Wilson)

David Siegel: What was your impetus to write 12 Million Footsteps?

Joe Calarco: Signature Theatre’s Education Director, David Zobell and I have wanted to address the refugee crisis with the Signature in the Schools program for the past 3 or 4 years. Everything we do is linked to what the students who come and see the piece are studying in school. I looked at their reading list and saw The Odyssey. It was an easy and powerful parallel to make. The show then expanded to also address other U.S. immigration issues like DACA.

In developing 12 Million Footsteps, what was your source material?

Well, of course, I read and watched as much as I could about the subjects we were tackling but our greatest gift this year is that our guest actor Mohamad Alrefai is from Syria. I got a perspective that I could never get from a book or documentary.

What do you hope the students get out of performing in 12 Million Footsteps?

I’m reminded every year that in high school you don’t tend to study current events. You learn about the past. When we tackle contemporary issues, the students’ worldview changes. My worldview changes tremendously writing it. They’re watching and reading the news differently. I think they seek out the truth more knowing that geopolitical issues are reported to us is from a US perspective. I’ve seen them want to hear stories from the people who are actually experiencing them.

What do you hope audiences come away with after attending one of the public performances of 12 Million Footsteps?

That the big news stories we hear about – real people are connected to those stories. The world is exploding right now with people torn from their homes by war and poverty, and there are people in our country under threat of being torn from the only home they have ever known. The day of our first public performance, the Supreme Court refused to hear the administration’s appeal regarding suspending DACA, which was a bit of a glimmer of hope for those who benefit from the program. And then just two days earlier, the UN unanimously voted on a 30-day cease-fire in Syria, and yet, while we were sitting there, Assad was still dropping bombs on his own citizens. So I hope the audience leaves with more knowledge about the real people connected to these big political stories we hear about, and I hope they leave wanting to do something to help the people whose lives have been torn apart by the leaders of the world “playing chess” — chess where they’re using massive amounts of bombs and other firepower to get what they want.

Anything additional you would like to provide readers about 12 Million Footsteps?

Signature in the Schools is hands down the most rewarding thing I do all year in my career. To see how it affects the students and our audiences and knowing how it affects me, it’s terribly rewarding. This year’s show has been especially impactful for me. It’s hard to stand by when such things are happening in the world. I feel like I need to do more. 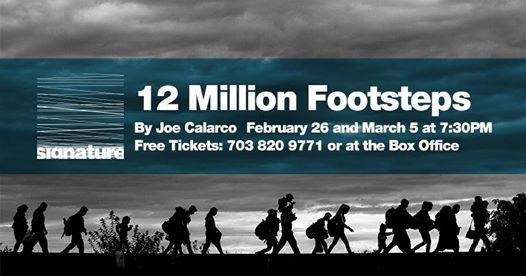 While the production is currently sold out, this note is on the Signature web presence: In the event that our website indicates that the performance is “Sold Out,” we encourage you to continue checking our website and Box Office for updates as openings for reservations are occurring regularly. Additionally, at 7:15 PM on the evening of the performance, a limited number of tickets will be released to those waiting at standby.