Race, religion, office politics, and fear of the “other” are just some of the issues that explode onto the stage in playwright/novelist Ayad Akhtar’s Disgraced, a 2013 Pulitzer Prize winner. Set in the Upper East Side Manhattan apartment of merger acquisition specialist Pakistani-American Amir Kapoor, Disgraced takes a serious look at what it means to avoid one’s cultural roots and assimilate. This show reminds us that ethnicity can be a sticky subject no matter how much one tries to avoid it.  Disgraced at Compass Rose Theater is 90 minutes of culture-clash fueled, unforgettable drama.

James Bunzli’s direction ensured the actors made each word of dialogue, each emotional beat, and each scene hum. The focal point of the show came when four of the five characters met for dinner in Amir’s apartment, and emotional wounds were revealed. As Bunzli wrote in his notes: “When things get heated over the salad, discussion of politics and religion reveal a crack in the facade of peaceful coexistence.”

All of the characters were running away from their culture in some way. Chief among them was Amir, who looked down on his Muslim background, and who had even eschewed his given name, Abdullah. Amir insisted that “Muslims don’t think, they submit.”

Par Juneja, a TV actor (Saints & Sinners, NCIS: New Orleans) and stand-up comic, was simply dynamite as Amir, playing nearly every emotional nuance a man can feel. From Amir’s heartbreaking story about how he picked up prejudice from his mother, to his alienation from the Muslim faith, and his angst over whether to defend an accused terrorist in court, Amir was a character tortured by issue after issue, and Juneja embodied him perfectly.

Amir’s wife Emily, a painter of Islamic art, adored Islamic culture. As played by the fabulous Katie Wicklund, Emily was the supportive white, Protestant wife who married a Pakistani. But apparently, somewhere in their backstory, Amir possibly had to forsake a racist father over a “painful Thanksgiving” past.

Jory, Amir’s black, law firm colleague, saw the American Civil Rights Movement as an object in her proverbial rear-view mirror, and believed in order over justice when it comes to civics. A question the play posed was whether the career-striving Jory would make partner before Amir did. Compass Rose Theater veteran Jory was brought to life by the terrific Aunye’ Boone.

Sam Midwood played Jory’s Jewish husband Isaac, who was a curator at the Whitney Museum and very interested in Emily’s art. Despite his religion, he was skeptical of the military and political policies of the state of Israel.

Amir’s nephew, Abe Jensen, aka Hussein, was a study of a man who would go so far as to change his name to assimilate into a dominant society. Joe Mucciolo brought intensity to his later scenes, as his character arc changed.

On the whole, Disgraced is a topical, energetic evening of superior theater. Under Bunzli’s direction, Disgraced crackles and amazes. If you love theater don’t keep this show to yourself – tell everyone you know to go see it. 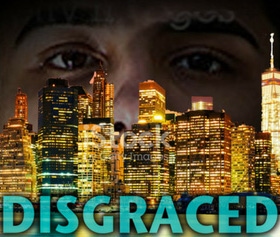