Frederick’s Other Voices Theatre puts a very large cast and a complex technical scheme to excellent use in its production of the 1971 Andrew Lloyd Webber/Tim Rice rock operetta Jesus Christ Superstar. A revisionist retelling of the biblical passion story, Superstar focuses on its creators’ imagining of the very human emotions of Jesus and his followers, never losing sight of the story’s possibilities for showbiz spectacle.

A perennial problem for actors playing the show’s lead is that, as written, Jesus is less a protagonist than a plaything of forces beyond his control. Whether with respect to his followers, the temple authorities, or the Romans, he seldom takes action; more often, he is acted upon. Eric Jones succeeds in avoiding the peril of excessive passivity, establishing from the outset a quite interactive character. Webber gives Jesus some of his most difficult music, above all “Gethsemane,” a dramatically satisfying second act aria in which the character expresses conflicted feelings about his fate. Jones displays a ringing falsetto in the song’s highest reaches, as well as a pleasing lower range in quieter passages.

Webber’s music also challenges an actor playing Jesus’ foil, Judas. In the role, Stacy Carroll’s most memorable moment is the snazzy second act number, “Superstar.” Her earlier music, full of youthful angst, focuses on her character’s muddled motives for the betrayal of Jesus, which neither playwright nor actor ever make quite clear. Carroll appears to conceive Judas as a gender-fluid character, a choice that works well in the production’s concept, which updates the proceedings from the 1970s to the present.

In the 1970s, Mary Magdalene’s ballad “I Don’t Know How to Love Him” became a pop hit (to the point where a bride asked a pianist friend of mine to play it as the postlude to her wedding – go figure). Taylor Knapp sang the number sweetly, doing particularly notable work in its pianissimo sections.

King Herod is played as a TV talk show host, complete with dancing girls and references to “fake news” and his show’s website. Ray Hatch shines as a song-and-dance man in the show-stopper “King Herod’s Song.” In “Pilate’s Dream” and “Trial by Pilate,” James Meech displays a powerful baritone voice and commanding stage presence.

In addition to several fine featured performances, Superstar offers a large, busy ensemble, playing convincingly a variety of roles at different points of the show and doing so with energy and verve. Special mention should be made of the group of dancing girls, who, whether in the Temple scene, the talk show, or “Superstar,” handle Donna Grim’s enjoyable choreography with precision and enthusiasm, looking good while doing it.

As in many Webber shows, there are a handful of memorable numbers and a good deal of thoroughly forgettable musical material. Some of the latter disserve the ensemble, as in the repetitive and clunky “In the Buzz” and “The Last Supper” (given its staging, “Last Picnic” might be a better title). Whatever luck Webber is having at a given moment, however, Zane Oberholzer’s preparation of the cast and the performance of the band are first-rate throughout. In particular, Natalie Spechar’s cello work is sublime, above all in the coda to the show as Mary Magdalene silently and touchingly mourns Jesus’ death.

The technical side of the production is one of its major virtues. Other Voices has significantly greater lighting resources at its disposal than many community theaters, and designer Steve Knapp uses them to good advantage, illuminating scenes in a variety of dominant colors as well as making adroit use of specials. Principals are sometimes briefly in shadow during their songs, however. The interior lighting of the cross strikingly changes from off-white to blue after Jesus dies.

Though there were some opening night mic glitches and bits of feedback, the sound design (Erica LeFebvre) has a striking moment as Jesus is being flogged, with each pass of the whip being timed precisely with a crackling sound. The multiple level-set design (Lee Hebb) – necessary to accommodate the large cast in the ensemble numbers – is dominated by a large screen/scrim, onto which are projected still and moving images setting various scenes. The images themselves are well-chosen, perhaps saving the best for last in the portrayal of an eclipse during the crucifixion scene. The scrim also comes into play as Judas hangs himself in silhouette. Among the set decorations is a large banner in which Jesus is made to strongly resemble a famous poster of Che Guevara.

The costumes (designed by Patty Byrne and Nancy Speck) are varied and quite marvelous. The ensemble begins in contemporary informal style, with jeans and hoodies prominent. The priests and temple officials are in dark suits, white shirts, and ties, with Pilate wearing a more stylish suit with a purple shirt. The contrast between these sets of costumes helps to set up the generational conflict theme that is part of the production’s concept. Herod was resplendent in a rose/purple suit. When Jesus is brought to court following his arrest, he wears orange prison garb. The dancers get several colors of matching glitzy, sequined, bare-midriff outfits, each sexier than the next, culminating in white angel costumes in “Superstar,” wings included. Glitziest of all, with shiny silver pants, is Judas’s outfit in that same scene.  (One of the oddities of the show – which makes no pretense of Christian orthodoxy – is that while Jesus’ resurrection is never portrayed, Judas returns from the dead to lead a production number.)

This Superstar is full of nice directorial choices by Susan Thornton, beginning with successful updating of the show from the 1970s to today (including such elements as cell phones, hashtags, and videos of contemporary conflicts), and bits like the TV talk show for Herod, conceiving the temple scene as happening in a nightclub, and having a press scrum pursue Jesus following his arrest. Her structuring – and Jones’s acting in – the flogging and crucifixion scenes are as harrowing as a depiction of torture should be. Thornton and Grim also deserve credit for efficient traffic management in the large ensemble scenes that fully pack the modest-sized stage.

Running Time: One hour and 55 minutes, including one intermission. 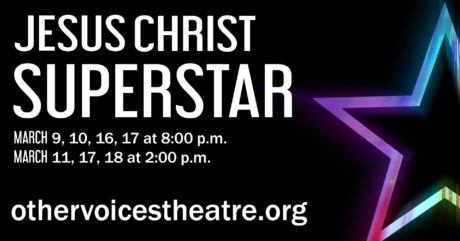 Jesus Christ Superstar plays through March 18, 2018, at Other Voices Theatre, 244B South Jefferson Street, Frederick MD. To purchase tickets, call the box office at 301-662-3722 or go online. However, it was announced that all performances of the run are sold out.