The sign of a good show is being able to announce you’re extending during your opening weekend. David London’s newest spectacular, Humbug, The Great P.T. Barnum Séance just extended through April 20. I went to his original Séance of the Creative Spirit in 2015 and had an eerily entertaining experience so I couldn’t wait to talk to him about his newest show. As you can see, he’s thoroughly done his homework on the subject.

Chris Griffin: Your promo material says you have some genuine Barnum artifacts (with an asterisked caveat)…

David London: I do! Many things, in fact, which I have been collecting for over 5 years, to one day make this séance! Many posters and other paper ephemera, Tom Thumb’s Miniature Wedding Album that was given as a gift to wedding guests when he married Lavinia Warren. Carte de Visites, small pocket-sized photographs, introduced in the 1850s – they were often shared, swapped and sold like trading cards. My favorite is a photo of Tom Thumb and Lavinia, which has burns to one corner and supposedly found outside Barnum’s museum after it burned for the second time in 1868. I also have tokens, coins, a copy of his autobiography that once belonged to Barnum himself, to name a few!

Cool! What’s the shape of the show? Obviously part of it is a séance and another part is exhibit. Walk me through it. I’m coming to the séance. I arrive at The Peale and what happens next?

Well, there are many surprises before you even enter the séance parlor, but I’ll leave those to be experienced. The séance itself is split into two parts. The first part is devoted to telling the real-life story of P.T. Barnum’s life and career. Genuine artifacts, reproductions, and completely fabricated objects illustrate the story, which is enhanced with magical effects. Then we move to the séance table. Inner Circle ticket holders select an object and bring it with them to the table. As it turns out, Barnum’s rise to fame corresponds with the birth of Spiritualism. After a brief introduction to the tools and techniques of Spiritualism, we use the objects from the trunk to attempt to summon the spirit of P.T. Barnum and his cast of curious characters. I say at the beginning of the show, “Inside this trunk is trapped the spirit of P.T. Barnum. Do you think we should let it out? Me too!”

Speaking of Spiritualism, didn’t you tell me there was some timeline connection between Barnum and Houdini?

I did! The connection is historically insignificant, but poetically profound. Ehrich Weiss quits his job at H. Richter & Sons Tie Factory to become a full-time magician on April 3, 1891 and changes his name to Harry Houdini. Barnum dies April 7, 1891. So one could say that Barnum died and Houdini was born in the same week.

There are also some fascinating connections between the Peale Center (where the séance is being held) and P.T. Barnum. The Peale is the oldest building in America built to be a museum. It was opened in Baltimore by Rembrandt Peale on August 15, 1814, just one month before the Battle of Baltimore. Under control of Rubens Peale in 1830, the Museum moved up the street. When it closed in 1843, the collection was partially sold to P.T. Barnum to fill his American Museum in New York.

Even among the Peale family, Charles Wilson Peale believed his Philadelphia Museum should be a public institution of learning. Rembrandt Peale structured his museum like a business and Rubens saw the museum as a show. Even within the Peale family, and from the earliest days of museums in America, lines were being blurred between education, exhibition, and entertainment. To some degree, Barnum, who always considered himself first and foremost a museum man, believed the lines weren’t necessary. As long as visitors were seeing new and novel things which sparked their curiosity and wonder, Barnum felt successful. Though you may not have gotten what you always expected with Barnum, you always got something grand, mysterious and completely unique, and for that, he remains a unique icon in the histories of “the show business,” America and the world at large.

How often did Barnum change over his exhibits?

All the time. He was always looking for the next big thing he could sell a ticket to. From an opera singer he had never heard, to the supposed largest elephant on earth, to the world’s smallest married couple. Providing novelty was an essential ingredient to Barnum’s success throughout all of his many careers.

When did circus come into it all?

W.C. Coup, a brilliant circus man, partnered with Barnum in 1871 when Barnum was already 60 years old. With their combined show biz brains, they were the first to move a circus from town to town by train. They later invented the three-ring circus, offering ever bigger and bigger spectacle.

When did the Peale reopen and when did performances start happening there?

The Peale has been managed by a non-profit for several years now. A little more than a year ago, Nancy Proctor was appointed as Executive Director. Nancy has spent over 30 years working at the cutting edge of museums and technology. It is currently halfway through a 6 million dollar capital campaign to restore the building and install an elevator. Phase 1 renovations are underway as we speak. While funds are still being raised for Phase 2 there is a unique window of opportunity where anything can happen at The Peale. Under Nancy’s direction, the museum is actively exploring the intersection of storytelling, immersion, technology, education, and entertainment. While The Peale imagines and manifests what its new life will be, The Peale is open to serve as a platform for exploration, experimentation, innovation, and creativity. Inspired by the history and significance of The Peale, as well as the building itself, it felt like the right time and place to bring the Barnum Séance to life!

Very cool. Is there a schedule up somewhere? I know besides your show, HT Darling, Submersive’s immersive show was there last year.

So, Barnum’s character/checkered past … he was both a slave owner and then later an abolitionist. Are you touching on any of that in the show?

His checkered past is real and it’s discussed in the séance. It has to be. The story of Barnum cannot be told without addressing issues of representation and exploitation. It’s also important to understand historical context. He was a complex man, alive in changing times. I have done my best to tell the real story. The good, the bad, the beautiful and the ugly.

Do you think there’s a contemporary Barnum?

Good question! I have wondered if there ever really could be another Barnum or Harry Houdini, or if the notion of larger-than-life, international celebrities is a thing of the past. Both Houdini and Barnum existed on the cutting edge of emerging technologies and learned to exploit these technologies to capture the public’s imagination and spread their wonder. Though we can theoretically reach more audiences than ever, it is infinitely more difficult to stand out from the onslaught of content. 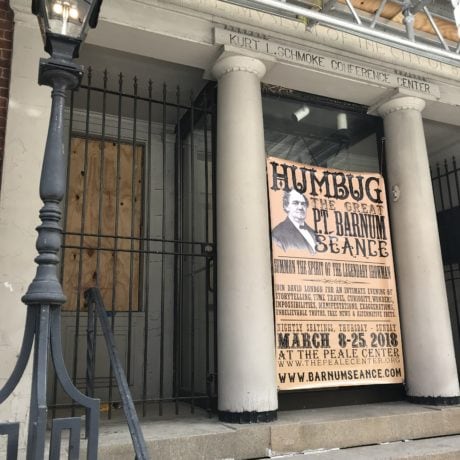