Post-Play Palaver is an occasional series of conversations between DC Metro Theater Arts writers who saw the same performance, got really into talking about it, and decided to continue their exchange in writing. That’s what happened when Senior Reviewers Sherrita Wilkins and John Stoltenberg attended a one-night-only program on the theme of gentrification and environmental change in Washington, DC, presented by Young Playwrights’ Theater as part of its annual social-justice performance series, Silence Is Violence.

John: Sherrita, your wonderful preview about this program said the evening would be

and that it was. For about 15 minutes, three guest artists performed impassioned poetry on the theme. Then for about half an hour, a nimble ensemble of five actors performed 26 one-minute plays on the theme, most by novice young playwrights. And it was interesting to hear their insta-takes on the topic—including sharp observations about the food desert (there’s only one supermarket in all of Ward 8) and uprooted neighborhoods (“all the poor people and people who look like us are gone,” “white people are taking Chocolate City and turning it into Oreo City”).

During all of this—even though the performance by design had a very entry-level esthetic—I was in engaged witness mode, the way I am whenever I go to see theater.  But it was what happened next that altered me.

Everyone in the audience was given a slip of paper and asked to write a letter addressed to “Dear DC.” We were encouraged to think of DC as a person, as someone we might actually communicate with. After about five minutes, the slips of paper were collected and each was read aloud by a member of the acting ensemble. And that’s when something shifted for me, not only in how I thought about DC but in how I felt about DC. Listening to the 50 or so missives, each coming from an individual’s very specific emotional connection to this town, I got a completely new sense of where I live—because I was briefly put in personal touch with a roomful of others’ sense of where they live. Somehow hearing these multiple personal points of view on this place transformed my own. Does that make sense? And did you feel anything similar?

Sherrita: Yes, I was also deeply moved by the “Dear DC” letters, written by the audience and performed in real-time, with no prep, by the ensemble cast of actors. Beyond impressive, the experience was raw, reflective and eye-opening. I’ve always known that DC was a city with soul, but that night I could feel its heartbeat. That night, DC had flesh and bones. The mixture of emotions that bubbled to the surface forced me to confront my own set of very complex feelings towards DC.

While I’m not a native of this area, I’ve lived here for the majority of my adult life. DC has nurtured me both personally and professionally. I’ve come into my own here and I’ve met some truly remarkable people. On the other hand, I’ve also seen the levels of homelessness, poverty, and disparity worsen. Housing prices in this area are quite literally insane. And I’ve witnessed police officers recklessly dole out tickets as if they were free food samples at Whole Foods. For me, the biggest question that came to mind was, are all the people who deserve a seat at the table able to weigh in and shape the changes that are taking place in DC? From both the letters and the one-minute plays, the answer I got was a resounding “NO.”

Also embedded in the “Dear DC” exercise was a sneaky call to action. Did you notice that? We were asked to leave a comment about what “DC will be.” This was a chance to envision the future, a chance to use our words to perhaps bring something new into existence. As I wrote my “DC will be” statement, I wondered about the students who had written the one-minute plays we watched. “How do they feel now that they’ve spoken up?” I thought. Unfortunately, most of the playwrights were not in attendance at the event and I longed for the opportunity to see if and how they planned to turn their words into concrete action steps. More than that I simply wanted to say, “Thank you. I heard you and your perspective is valid.”

The value of uplifting voices that are often marginalized or outright silenced can’t be overstated. Young Playwrights’ Theater’s work in this arena is vital. I left the event reaffirmed in my belief that the arts are a powerful gateway to activism. 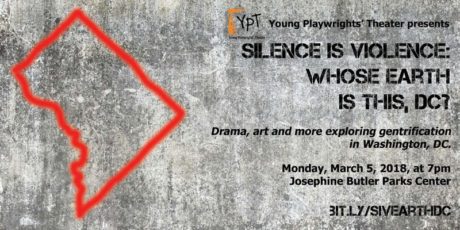 LINK:
What to See This Week: Young Playwrights’ Theater Presents ‘Silence Is Violence: Whose Earth Is This, DC?’ by Sherrita Wilkins