Creative Cauldron’s Learning Theater Ensemble presents The Snow Queen, an original adaptation based on the tale by Hans Christian Andersen. Written by Ellen Selby, this production joins a long list of films and adaptations inspired by the original, including The Lion, the Witch, and the Wardrobe and Disney’s Frozen. Alongside Laura Connors Hull, Selby co-directs a large number of young actors in this project, with music and choreography by Matt Conner and lyrics by Stephen Gregory Smith. The LT students themselves contributed a lot of content to the show as well, and the result is an evening full of imaginative fun for the entire family!

As the cast is a large one (nearly 30 actors!) Scenic and Costume Designer Margie Jervis needed to reserve space in the intimate black box theatre. Winter-stripped tree branches intricately frame the whitewashed stage, while a couple of small platforms give the actors a better range for movement. Much of the tone comes from heady blue lighting from designer Lynn Joslin, who also cleverly uses a disco ball and hand-held mirrors to further manipulate the effects. Together with the set painting and the sound of whistling winds, the resulting atmosphere is ethereal and slightly eerie– beautifully intimidating. Jervis uses the actors’ costumes to help create numerous settings as the plot unfolds– my favorite being several elaborately-crafted flower hats that make up a magical garden.

Augustus Knapp narrates the play as Ole Lukojoe, otherwise known as “Sandman.” Lively and engaging, he is the only adult cast member in a show comprised of seven stories–individual pieces that work together to tell the story of a brave young girl who seeks out to rescue her friend from the clutches of the wicked Snow Queen. Gerda, played by Mai Gabra, meets a lot of new friends on her journey, from a haughty River Sprite (a hilariously haughty performance by Enola Danewitz) and a magical garden full of talking flowers, to a band of rowdy robbers lead by a swashbuckling Miri Brooke. Despite the challenges, Gerda persists in her search for Kai (Jared Tulodo), a friend who has grown cold-hearted under the influence of The Snow Queen, played by Morgan Beltson. A number of songs help move along the plot. “Once Upon a Time, Far Away, Long Ago” is chilling and slow, while “The Narcissistic Flower Party” is a rousing audience-favorite.

The kids are all very impressive with their performances, and show a lot of potential and charm. Ben Graham and Abby Fred play a bickering crow couple, and Owen Thiebert steals the scene as a Grumpy Weed. Madeline Aykens gives a good performance as a Grandmother, and Libby Brooke is particularly memorable as a Buttercup flower in need of some anger management. A lot of the dialogue and character nuances came from the children themselves, which was a smart choice from the creative team, as these kids are flat-out FUNNY! I was not expecting the show to be so filled with humor, and was very pleasantly surprised. There were times when I couldn’t hear the dialogue over the audience’s laughter!

Creative Cauldron’s The Snow Queen is a great way close out the Winter season. The energy is fresh, exciting, and contagious. This is one that the family shouldn’t miss! 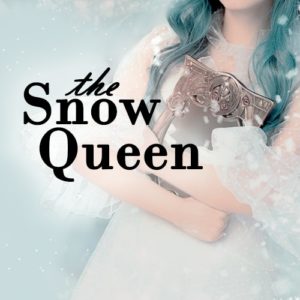 Running Time: About one hour and fifteen minutes, without an intermission.