The unsettling sight of a young man in shackles sitting on a bare, plank-wood floor; a glimmer of night sky piercing the darkness through the barred window of a simple jail cell; and the tense, disturbing sounds of an angry mob in the distance immediately grip the senses upon entering Nathan Alan Davis’ Nat Turner in Jerusalem. Director Jose Carrasquillo draws the audience straightaway into an imagined last night on earth in the jail cell of Nat Turner, the leader of the bloodiest slave revolt in US history, in this riveting production at Forum Theatre.

Nat Turner’s Rebellion of 1831 continues to draw interest about the ugly realities of slavery in the movies and in theaters. His fearless revolt against injustice and demagoguery still provoke conversations today that resonate in the current context of American history and politics.

Nat Turner in Jerusalem is an important work that keeps the dialogue alive. It examines the fears that can stoke the frightening fires of social division and questions what is justice in light of our common humanity.

Light plays an important part in shaping the themes in Nat Turner in Jerusalem. The theater is very dark and the stage upon which the story unfolds is only barely lit by the oil of a whale lamp and a bit of brightness shining through the prison window. Sometimes the whale lamp is blown out and the moon’s glow is imperceptible.

Sitting for an entire production where both the stage and the house are almost in total darkness is an experience in itself. One craves light in the darkness. The subtle lighting design by William D’Eugenio deepened the serious tone of the play and greatly enhanced its dramatic edge, bringing to my mind the words of Rev. Dr. Martin Luther King, Jr.: “Darkness cannot drive out darkness; only light can do that. Hate cannot drive out hate; only love can do that.” The minimal lighting made MLK’s message a visceral experience through Nat Turner in Jerusalem.

Poetic language gives this production a richly nuanced loftiness despite its stark, static jail cell set design by Tony Cisek. Messianic symbolism, superbly captured in Nathan Alan Davis’ elegant script, seemed ironically profound because Nat Turner didn’t lead the slave revolt for political reasons; rather, spurred by his belief that he had a spiritual calling. He thought he was chosen by God to lead his people to the salvation of being free. And his trial for death by hanging took place in Jerusalem, VA (now Courtland).

Nat Turner was a slave but also an educated preacher to the enslaved. He had visions and saw signs that legitimized in his mind the brutal attack on whites in Southampton, VA that led to other slave revolts and the loss of many white and black lives. Sarah O’Halloran’s moving sound design projected Negro Spirituals and spiritual vibrations that captured the visions in Nat Turner’s mind.

Jon Hudson Odom’s compelling charismatic characterization of Nat Turner is that of a fearless prophet. In lyrical language and preacher-man wit, he believably exerts his powerful influence, without remorse, yet likable charm and missionary zeal upon both Thomas Gray, a local lawyer who, along with the jailer, revisit Nat Turner in his jail cell on the night before his hanging. Gray is there to get final details for his book, “Confessions of Nat Turner: The Leader of the Late Insurrection in Southampton, VA”. Their conversations unfold somewhat slowly yet the tempo felt about right for a 90-minute production.

Odom, Forum Ensemble Member and Helen Hayes Award recipient for Outstanding Supporting Actor, is a marvel in projecting understated strength. With a minimum of movement (he’s in arm chains and leg shackles for most of the play) and by sheer force of Nat Turner’s persona, he is able to penetrate the dark shell of Thomas Gray and the guard to reveal their underlying humanity despite their both being perpetrators of a social system that denied it.

Joe Carlson, a Helen Hayes Award nominee for Outstanding Leading Actor, plays dual roles as Thomas Gray and the jailer. His stellar performance of these two seemingly different characters from different social strata was so convincing that for a nanosecond, I was expecting to see a third person take a bow at curtain call. His quick changes were completely natural as he entered and exited as the long-haired, aristocratic lawyer and the lower-class guard.

The relationships in Nat Turner’s jail cell reflect the unfortunate reality that fear can be more powerful than logic – then and now. The play’s powerful message can be directed to present-day outrage at the political direction of this country.

Just this morning, I read the front-page headline of the Washington Post, “A bigger divide than the border,” an article covering reports about immigrant children being separated for months from their parents by US officials upon being apprehended on our southern border.

The uprisings will never cease

Running Time:  90 minutes, with no intermission. 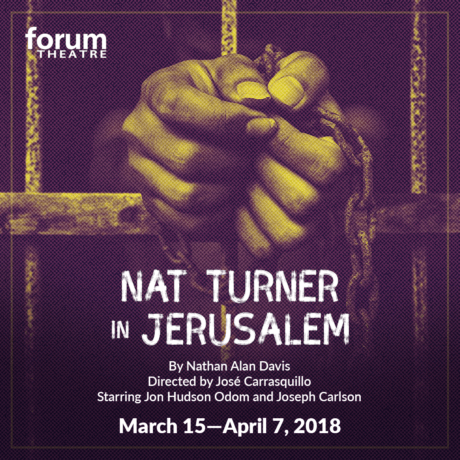