What do you get when you cross the super-popular hits Wicked and Frozen with a Boston accent? The laugh-out-loud musical parody Wicked Frozen, presented by John Lant and making its Off-Broadway debut at St. Luke’s Theatre. Created by Toby Singer (music and lyrics) and Zoe Farmingdale (book and lyrics) in 2014, the timing couldn’t be more perfect for their current revival of the hilarious mash-up, with both of its titular shows now playing on Broadway and theater-lovers well-versed in the plot points and figures it so cleverly skewers.

The spot-on send-up “of some magic ice witch princesses and other stuff like that” is filled with high-energy song and dance, goofy characters, scrambled names and places, pop-culture references, Boston jargon, and a decidedly Millennial sense of humor. Using the framing device of a play-within-a-play, the show – ultimately based on the beloved children’s stories The Wonderful Wizard of Oz by L. Frank Baum and The Snow Queen by Hans Christian Andersen – is set at a Boston high school that’s been hit by an unexpected snowstorm. Though Principal Andersen-Baum has sent everyone home and cancelled all after-school activities, drama-club teacher Kristen Chenobell and her student Adele Dazeem (giving nods to the lead actresses of the 2013 film Frozen, the original Broadway stars of Wicked, and a certain actor’s loopy mutilation of the latter’s name at the 2014 Oscars) stay behind to read the new musical she’s writing. What ensues is Adele’s absurdist vision of performing her work with her classmates and school staff, who embody the roles of the familiar archetypes that best suit their personalities, while navigating both the demoralizing experiences of social politics as a teenage girl who’s not part of the popular clique, and the impact of global warming on our endangered planet.

On her fantasy journey through the magical land of ScandiNorFinDelle, Adele (played with an endearing combination of teenage angst and enthusiasm by Kathleen Armenti) imagines herself as the story’s heroine Elsaba (an inventive and seamless fusion of Frozen’s Elsa and Wicked’s Elphaba). Along the way, we encounter a host of deftly-satirized scenes, costumes (by Jennifer Anderson), and characters, including the pretty and popular Glindanna (her laughable vanity vivaciously captured by Lily Davis), the “rich, privileged . . . white!” and absolutely clueless Prince IKEA (Will Jacobs’ dopey characterization is a show stealer), a Funny Snowman (Jake McKenna, providing some silly sight gags with a carrot), and the villainous Cli-MAH-te Chan-JE (the terrific Allison Frasca, who wickedly conjures her “Evil Laughter” and doubles as the humorless Principal Andersen-Baum), interspersed with conversations between Adele and her understanding teacher (the sympathetic Meagan Wells). By running through her play and working out its ending, Adele learns valuable life lessons about the importance of love, kindness, and self-worth when dealing with others, and recognizes the beauty of snow in preserving a stable natural environment.

Farmingdale’s direction and choreography are dynamic and youthful, with lively side-splitting spoofs of Broadway-style dance, including the ensemble’s high kicks, chorus line, and jazz hands in the rollicking “I Get Lost in IKEA.” Singer’s music direction and accompaniment (with Jeremy Yaddaw on drums) are equally ebullient, with a bouncy beat in such amusing numbers as the show’s theme song and the wicked-funny “Boston Anthem.” Other standouts are Glindanna’s advice to Elsaba on how to be a “Social Success” and the ultimate moral “Don’t Hold On” (lampooning Wicked’s smash hit “Popular” and Frozen’s “Let It Go”).

Wicked Frozen is a witty, fast-paced, and spirited post-modern take-off on the iconic interwoven eponymous stories, seen through the eyes of a contemporary teen. But along with the laughs come the serious underlying themes of climate change and environmental activism, and the human need for friendship and acceptance, which are well delivered and clear, without minimizing the show’s overall wackiness. 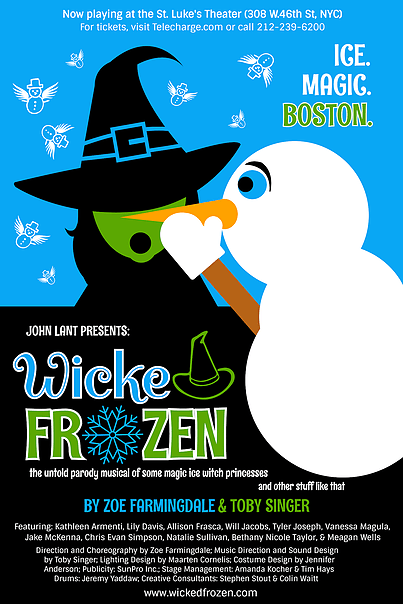