Next up in the reading series is playwright Nicole Burton with Swimming Up the Sun. The reading will be directed by Carol Cadby. It will feature DC area actors Dina Soltan, Emily Marsh, Lisa Hodsoll, Clayton Pelham, Elliott Bailes, Claire Schoonover, and Mark Lee Adams. It will be performed at Alexandria’s MetroStage on Monday evening, April 16, 2018.

My conversation with playwright Nicole Burton, who is a member of the Dramatists Guild, is below.

David Siegel: What was the impetus for you to write Swimming Up the Sun – A Memoir of Adoption?

Nicole Burton: I wrote Swimming Up the Sun: A Memoir of Adoption because, even though I’m a playwright by vocation, as I related the stories of my search and reunion with family members, my friends exclaimed, “You should write a book!” It was a good story to tell, so eventually I did. After that, it was a natural step to take the book and adapt it for the stage, natural albeit challenging.

Please tell me a bit (synopsis) of Swimming Up the Sun – A Memoir of Adoption?

The play–and the book of the same title–tell the story of Nicki, a young woman who immigrated to the U.S. with her adopted family and decides to return to England to find her natural parents, a Jewish father and a mother believed to be an artist. The British government had just changed its law allowing adult adoptees for the first time to gain access to their own original birth certificates and the information contained therein. Armed with the facts Nicki has managed to uncover, she navigates her way to her natural father, who helps her find her mother. There the story becomes more complicated as Nicki discovers that her mother Eve has kept Nicki’s existence a secret all these years. Will Nicki and Eve be able to forge a relationship, and on whose terms?

Please tell me a bit about the characters the actors portray in the reading?

In addition to Nicki and her natural parents Philip and Eve (who are indeed a Jewish businessman and an artist), the principal characters include Nicki’s adopted mother, Moo, Nicki’s fiancé/husband James, and her half-sister Angela, Eve’s next younger daughter. It turns out that adoption and reunion affect many people in the adoptee’s sphere.

Will the actors read from lecterns with book in hand? Any technical such as sound or lighting or costumes?

The actors will be performing script in hand with minimal costumes and lighting, but it’s surprising how a talented troupe and a good director can bring a script to life through blocking (the actors’ movements on stage) and timing. In my experience, the audience often forgets they’re not at a full production as the story sweeps them along.

A staged reading, I feel, is always for the playwright. It’s a chance for me to see what other artists do with my words and story, and it lets me test whether my intentions hold up to the collaborative process. Sometimes I learn whole new truths about what I’ve written! I get to sit in the midst of an audience and listen and feel how they respond. At this reading, the third for this particular play, I shall be looking at the development of Act II, the evolving relationship between Nicki and Eve, and the ending.

What would you like audience members to come away with after the reading of Swimming Up the Sun?

First, I would like the audience to be entertained and captivated by the story and the characters. That’s always Job One. I also want them to understand, from the adoptees’ perspective, that adoption per se is immensely complex and often traumatic, and that family preservation and reunion are the respectful and compassionate choices we need to make.

Is there anything additional you would like readers to know about Pipeline Playwrights?

A wise person once said, “Artists rise in clusters.” I’m thrilled to be part of Pipeline Playwrights, the Northern Virginia women’s playwriting collective. This is our second year of successfully producing new play readings at Metro Stage in Alexandria. We’re excited to be presenting How’s That Workin’ Out For Ya?, four subversive comedies by women, at the 2018 Capital Fringe Festival this July. The Fringe Festival will be held this year at various venues in Southwest D.C. near the new Waterfront. Our show will be performed at Arena Stage on July 17, 18, 22, 26, and 28. There’s more information on Thelma Theatre’s website and the Pipeline Playwrights Facebook page.

Pipeline Playwrights’ reading of Swimming Up the Sun – A Memoir of Adoption will take place on Monday, April 16, 2018, at MetroStage – 1201 North Royal Street, in Alexandria, VA. For information, go online. 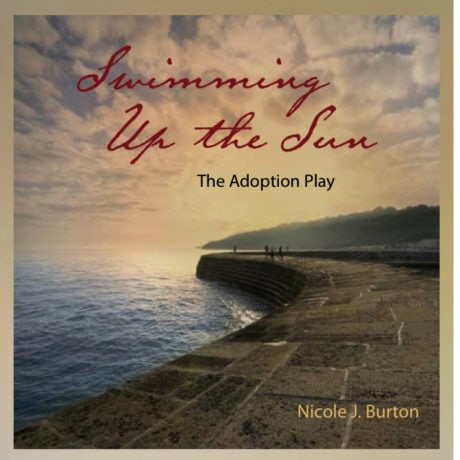 Note: Reading of Swimming Up the Sun – A Memoir of Adoption is free ($10 suggested donation), with a reception to follow.