Pinky Swear Productions’ latest offering, Use All Available Doors, will open at the Dupont Underground this weekend. The popular DC arts and culture space in a subterranean trolley station is the perfect setting for a show that tells the story of a soon-to-be decommissioned WMATA train car, a grieving train operator re-evaluating her life’s path, and a revolving door of passengers traveling the length of the Red Line.

Pinky Swear presented a staged reading of sections of the play at the Kennedy Center’s Page-to-Stage Festival in 2016. This will be the first fully-staged production of the show and is presented through a grant from CulturalDC’s Space4 Art Program.

I was happy to learn more about Use all Available Doors from Playwright Brittany Alyse Willis and Director Toni Rae Salmi before the show opens on April 13th.

Nicole: Why the Metro? Why the red line? The Pinky Swear Production website describes Use All Available Doors as Brittany’s “Ode to the DC Metro.” That implies some pretty intense feelings!

Brittany: I worked in a gift shop at the Natural History Museum for a couple of years and had to ride the Red Line five or more days a week during that time. I didn’t grow up around public transportation and it feels like such a gift to be able to travel despite not having a car (and despite the many, fair concerns DC folx have with WMATA).

Being in a train car is, in many ways, being suspended in space and time. We can’t escape the journey or speed it up, and we can’t escape the people either. In the same way, Sherry, the train operator in UAAD, can’t escape her mind – the places it travels or the memories to which it clings and relives. I wanted to explore loss, daydreams, and the obsessive reflection we do during those times. Telling that journey through the path of a train just made sense to me.

Describe the show’s plot and goal in a few sentences. Is the story more about the life of Sherry, the train operator who is reflecting on her time with WMATA or the people who use the train through the show?

Brittany: Is it cheating to say both? In Use All Available Doors, the Red Line is both a real place and a map through Sherry’s mind – a string of memories and yearnings and feelings that keep bubbling up despite her trying to contain them. Sometimes those internal feelings spill into the car itself in the guise of a parade or sing-a-long. But some of the scenes are also true stories from metro riders – an unsolicited foot-washing, a gaggle of frightened tourists, an abrasive interview with local news.

Toni, What vibe can audiences expect at the show? I know the seating is going to be made out of cushions that WMATA donated from a scrapped car? Talk a bit about the Dupont Underground space and what you hope to do with it.

Toni: I have tried to infuse a “DC vibe” in this production, from making sure most of the cast and production team were either born or live in the DC area to using local bands for the music in pre-show and during the performance. You can be sure the audience will be dancing in their seats to go-go tunes!

I was very excited that the production was going to be staged in Dupont Underground. Pinky Swear Productions is not new to alternative, site-specific work: in 2014 we produced the Tiny House Plays, which were five short plays written by local playwrights that were performed in tiny houses stationed on a lot in Northeast DC. So performing in a non-theater space was a challenge we felt we could meet. We knew that it was going to be difficult to stage in the space that we were provided. We needed to bring in our own lights, add to the existing platforms that were already there, devise a backstage space and dressing room for our actors. And while our stage is set over the trolley tracks, some of the audience will be actually sitting right on them. The audience experience will be quite different than what they might expect from more traditional theatre performances.

You say you want the production to “reflect the District as a whole,” much like the riders of the Metro do. What does diversity in DC mean to you? Do you see DC as a diverse city? How do the arts come into play in that regard?

Brittany: I don’t think the play I wrote represents every person in DC, and it would be naive and irresponsible of me to pretend it did. In fact, if I were to write the play again, it would be a devised piece, collaboratively written with a variety of DC residents who can speak to their own experiences better than I can. I’m still learning. But I’m proud of what we’ve created, and it’s been very important to Toni and me from the beginning to involve DC artists from a variety of backgrounds on-stage and behind-the-scenes, and to remain cognizant of how any of “our” DCs might look different than the next person’s.

Toni: Usually, when a play is produced about DC, it involves the federal government in some way. What I loved about Britt’s script was that it really centers on the different people who live here and the small, short-lived communities that are formed in metro cars every day.

I moved to DC in 1998 because I wanted to live in a more diverse city than I found in the Midwest, where I had lived most of my life. DC has citizens from every country in the world so you would think that DC IS a diverse city, but after learning from a 2015 study that DCs neighborhoods are really not that diverse, it became my goal for Use All Available Doors to be an arts event that brings residents from different DC neighborhoods together. Some residents might not think they have a lot in common with others outside their own neighborhoods, but all of us have needed to use public transportation in some form while we live here. I think if we get audience members from Northwest DC sitting next to ones from Southeast DC and connecting through the Metro stories they hear onstage during our performance, this production will be successful, at least to me.

Toni, How did directing this show in a former trolley car station impact your approach? What are the challenges to giving the appearance of movement?

Toni: I had to constantly remember that the final product was not going to be in a traditional theatre space. I could not rely on the fact that the stage was going to look exactly the way I envisioned it. I had to say numerous times to the actors, “We will set that when we get into the space,” because we honestly didn’t know what we were working with until the set was loaded into the space.

In regards to movement, there are times that we acknowledge that yes, this is a moving train. Our choreographer, the fantastic Pauline Lamb, worked with the actors not just on dancing (yes, there is dancing!) but also on how bodies move in a train. So we have a few “bumps” here and there, and via Cresent Haynes, our wonderful sound designer, further indications that the train is in motion, but I really didn’t want to recreate reality–the audience can see that every day–I wanted just enough so that people understood that the play is set in a train car and would focus instead on the story.

Brittany, what is the most interesting encounter you have ever had on the Metro?

Brittany: I’m sitting on the train, music on, staring out waiting for it to move to drag me to my job.

You know those red emergency handles in the center of the older train cars, the ones that open the doors in event of an emergency? Well, one door. One side of the double doors.

Someone brushes past and I look up, right at that red handle sticking out of the wall like the hilt of a sword. Two people in uniform struggle with something in the door. One’s in blue military dress and the other is a WMATA employee, the bright reflective yellow vest dancing as the worker tugs and tugs, pausing for a moment to assess the door.

I take out my earbuds and hear crying, and realize someone caught their foot between the train and the platform. As soon as I realize this, the two saviors lift an older, frail body out of the chasm and onto the platform, abandoning a shoe on the tracks below. Our Cinderella collapses, sobbing. The service member holds the shoeless foot softly, patting Cinderella’s head and whispering something the train keeps me from hearing.

And the WMATA employee. The WMATA employee with two shaking hands and two eyes wet with worry left Cinderella to their other uniformed savior before stepping back on the train, pushing the red emergency handle back into the wall and letting the door close. I look at my fellow passengers and they seem as stunned as me. We hadn’t known anything was happening. The train starts. My fellow passengers and I put our earbuds back in our ears. Our commute continues. 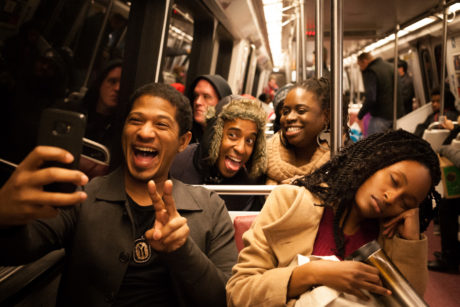 Use All Available Doors will play from April 13 through May 6, 2018, at Dupont Underground – 19 Dupont Circle Northwest, in Washington, DC. Find out more about Pinky Swear Productions online.

LINK:
Pinky Swear Production to present world premiere of ‘Use All Available Doors.’