When Natalie Toro steps onto the Arena Stage in the world premiere of Snow Child this week, she’ll be adding a whole new role to the worldwide musical repertoire.

But while the part is new, the character she plays—Esther, a tough-minded settler on the Alaskan frontier nearly a century ago—is similar to some of her best Broadway roles, including Eva Peron in Evita and Madame Defarge in Tale of Two Cities.

Even the role of Éponine, the young woman in Les Miserables – which Toro performed on Broadway for three years in a row, right after she graduated from college – falls into the same category.

“They’re all survivors,” she said, as we talked one evening after a day of rehearsals. “And Esther is one of them. She’s a powerful, grounded woman.”

In Snow Child, Esther is a 48-year-old former prostitute who runs a brothel along with her husband, George. The latter, according to Toro, looks like Santa Claus distilling moonshine. Together, they’ve brought up four children, living on a homestead in a brutal environment.

“Surviving in Alaska in the 1920s was very hard,” she explained. The homesteads consisted of 150 acres of untouched land. It was a place where everyone had to start from scratch. And where people had to kill for food.

“This was no place for vegetarians,” she wryly observed.

Toro, who grew up in the Bronx, the northernmost borough of New York City, had never experienced such hardships. “In Alaska,” she added, “even the spring is harsh. The sun is dark.”

“You had to be bigger than life to survive under these conditions,” she said. “Since I’m only 5’2”, I had to learn how to stand taller. And to create the illusion of a woman who takes no shit.”

Snow Child is about more than survival. It’s also about magic. Or, as Toro put it, “It’s about the magic of the land, the wonder of the wilderness. And the way in which nature changes the land.”

The heart of the magic is the snow child itself, a ghostly figure who drifts in with the snow and then comes alive, changing the lives of a childless couple just as nature changes the land.

“It’s a classic fairy tale,” Toro said, pointing out that every culture has its version of the imaginary child who comes to life, helping people to cope with loss.

Music and magic are often intertwined. And in this case, she added, “The music is gorgeous. It’s laid back, cool, a combination of blues and folk.”

Bob Banghart, the composer, calls it “a northern hybrid.” Banghart, who co-founded the Alaska Folk Festival more than 40 years ago, thinks of Snow Child as “back-porch Broadway,” with elements of Mabel Carter, Leonard Bernstein and Jack London thrown in.

Front porch or back, Natalie Toro has been belting out Broadway songs since the age of five, when she had her first solo performance at Amateur Night at The Apollo Theater in Harlem. It was an extraordinary event.

“My parents hired a five-piece band to accompany me. I took the microphone off the stand—not knowing I was supposed to leave it there—and I walked around the stage like it was home. The audience rose. And I asked my parents, why are they standing?”

It’s a good bet that audiences will be standing again—as they have at just about every Toro performance since—when Snow Child premieres this week. 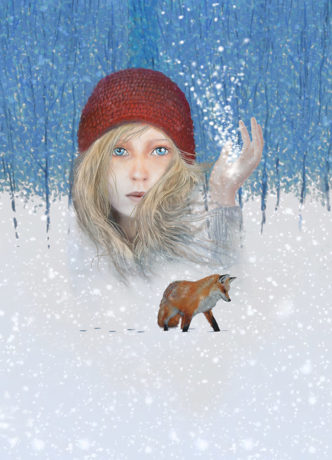 Although Snow Child is Natalie Toro’s debut at Arena Stage, it is a reunion of sorts for her and two of the other leads, Matt Bogart, who plays Jack, and Christiane Noll, who plays Mabel.

The three met as children at the Manhattan School of Music’s Preparatory Division, where they studied singing together and performed in school concerts.

Although they stayed in touch over the years, this is the first time the three have appeared together on a professional stage.

Natalie, who grew up in the Bronx, also attended the High School of Music and Art, one of New York’s competitive schools for gifted children. I attended the same school, some 25 years earlier. Despite the age difference, many of our experiences were the same.

When we were there, M & A, as we called it, was located in a former convent. It was a gothic structure, with four towers, next to City College in Harlem. We called it the “Castle on the Hill.” It loomed over the neighborhood, forcing us to climb 138 steps to get to the school’s front door.

Once inside the building, we were welcomed—or scowled at—by the bronze bust of Arturo Toscanini, the great Italian conductor who (among others) had championed the school and conducted the senior orchestra once a year till he died.

Natalie was a music major, with a specialty in voice. Her favorite courses were Chorus and Drama. She could sight read and play the piano. But while she understood—and did well in—music theory, she could not comprehend math.

“I was doing so badly in math that I was about to fail,” she reminisced, e-mailing me from the middle of a dress rehearsal. “But my Algebra teacher relented. He said, ‘I can’t fail you with a voice like that!’ And he gave me a passing grade.”

Natalie went on to the Boston Conservatory of Music, where she won her BFA in Musical Theater, and was immediately cast as Éponine – the first American to play the role – in Broadway’s Les Miserables.

“My favorite performances at M & A,” she added, “were those where everyone came together. We had semi-annual concerts, choral performances and fully staged musicals. It was truly magical, having all that energy on stage.”

She’ll be replicating that experience—magic and all—in Snow Child at Arena Stage.