Using interviews of real community members wanting to live a full life here in America as her source of inspiration, Jane Franklin and her eponymous dance company have developed an engaging evening focused on people existing on the edges of society. These are people who do not want to throw away their shot at making it in America, no matter the obstacles.

The Jane Franklin Dance Company performance, Border, is a multimedia fusion of movement, sounds, and art sympathetically and often understatedly illuminating barriers that some face trying to make it through their daily days.

Border is not only about physical boundaries, like a river to cross, or barriers like a newly built wall to keep some out. No, Franklin has located a much broader notion of a border. It is one fitting for our contemporary intersectional times.

Through interviews and her spotlighted selections, Franklin finds border lines based upon race, gender, ethnicity, citizenship status, appearance, health status, interracial marriage and even military service. Each of these becomes the foundation for a constructed contemporary movement, voice, music vignette to inform in a non-threatening manner.

If I were to select one of the nearly two dozen short vignettes as the linchpin for the entire evening, it would be the one with words from a young woman who we hear in a short burst from a recorded interview, “I want to be part of this country. Why does it not want me?”

For over 70 intermission-free minutes, the seven members of the Jane Franklin Dance Company perform at full throttle with technical vigor and synchronicity. Whether in pairs or other multiples, the dancers illustrate and visually clarify the storytelling, whether with live or recorded voices. The dancers become the representatives of the inner being of those speaking. They are the visual presenters of tensions, stresses, and even moments of decency. The dancers’ movements communicate to the audience, illuminating the entire litany of mean-spirited aggressions foisted upon the storytellers. There are no sugar plum fairies in sight.

Now, let me add something personal. Franklin has engaged two men, Ken Hays and Rich Hyman, to perform with the company. Why should this be highlighted? Well, it provides opportunities to sketch out a couple of stories that could have been missed and gives some men the opportunity to quite possibly see their lives depicted. The two men are not in the performance to lift others or show physical strength. These two men present tales about “driving while in an interracial marriage,” and how to survive in a small space with someone with vastly different political views. One particular story pricked up my ears for I lived something similar in a long-ago life. I was a young military officer when the first and only female officer arrived to take over a flight of about 100 men during an armed conflict, and the bathroom became an issue for a time.

Border’s musical selections are acoustic and ambient. The selections are from Rachel Austin, Frankum & Frankumjay, Patrick Leiberkind, and Steven Rogers. Their music at times quietly underpins and at other times more vigorously propels the evening. The music is of a kind that adds tension of a non-jarring nature, at times resembling white noise.

Jonathan Dahm Robertson creates a very simple set for Border, befitting Theatre on the Run’s small space. Two movable contraptions (credited to Ken Hays and Jane Franklin), represent fences, borders, barriers, and the mind itself getting in the way of people connecting or finding some common ground. Uncredited costuming is modest loose-fitting tunics, skirts, and bicycle shorts in shades of grey and bare feet.

Border seems a unique way for a professional dance company to connect with its own local community. The show is full of sensitively presented content covering a wide range of intersections. In our current times of Twitter bombast, Border is a godsend. These are not stories drawn from the lives of those who are privileged. How refreshing.

Melded all together, Border is something that no algorithm or code can currently accomplish. It has a soul and heart for the invisible ones in our midst–those likely overlooked in our own daily grind. 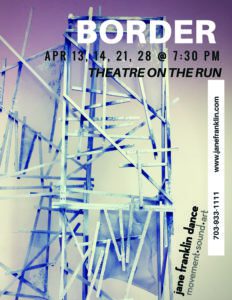