Mystic realism and metaphor meet the Irish gift of gab and a dire predilection for alcohol in Conor McPherson’s The Seafarer, a disturbingly dark and devilish comedy about lost souls, drunken misdeeds, and the consequences that follow in life and the hereafter. Directed by Ciarán O’Reilly, the Irish Repertory Theatre’s current production of the 2006 award-winning play delivers the mordant laughs, tragic pathos, and the possibility of hope and redemption in even the bleakest of situations that people prone to the temptations of ‘demon drink’ tend to create for themselves.

The dysfunctional lives of McPherson’s characters are manifest in the neglect, clutter, and disrepair of the Irish Rep’s telling set design by Charlie Corcoran – a dirty, dilapidated, debris-strewn house in a coastal suburb of Dublin, in which five old acquaintances have come together on Christmas Eve for a day and night of non-stop drinking and an annual game of poker. But this year, at the hands of the Mephistophelian Mr. Lockhart, the stakes are higher than ever before, as the unemployed Sharky, who has just returned home to care for his accidentally-blinded elder brother Richard, faces retribution for a grievous offense from his past.

Drawing on traditional Catholic iconography, the playwright employs the device of an unsettled deal with the devil as a metaphor for battling the inner demons that haunt the psyches of the troubled figures. The unseemly roster of men behaving badly is plagued by failed and combative relationships, lost jobs, anger, hostility, and violence, all fueled by an over-indulgence in liquor that both exacerbates their problems and blinds the characters to them, in their desperate need to escape from the unpleasant realities of their daily existence and “to kill all the pain.” While the unflattering cliché of the drunken Irishman is an all-too-familiar leitmotif in Irish literature and drama, McPherson defines each of his flawed characters with a distinctive personality, and the show’s all-male cast does not resort to easy over-the-top cookie-cutter stereotypes in portraying them. Their speech is realistic, their jargon recognizably Irish, and their very human characterizations range from thoroughly unlikeable to laughable, infuriating to heartrending to unexpectedly hopeful.

Richard Harkin, brilliantly brought to life by Colin McPhillamy, is unceasingly cantankerous and filthy in every way, from his squalid home to his stained clothes (costumes by Martha Hally), foul mouth, and lack of personal hygiene (McPherson is not averse to toilet humor), which he describes to his friends in disgusting detail. Incessantly barking orders and hurling insults at his obliging brother, leading his guests outside with his cane to fight the neighborhood “winos” (to whom he thinks he’s superior), falling asleep on the living-room floor in a drunken stupor, impatiently sliding down the stairs, and oblivious to the irony of singing Christmas carols and devotional hymns while over-imbibing, he is the epitome of a belligerent drunk, who thinks he’s funny, doesn’t care how offensive he is, and clearly relishes his constant state of intoxication (e.g., When he asks Sharky to make a round of Irish coffee, and is told they have no coffee, he gleefully responds “then we’ll just have the Irish!”).

The terrific Andy Murray elicits sympathy in his fully-rounded performance as Sharky, who has come to recognize his own flaws, has sworn off liquor for the holidays, and is making a heartfelt effort to deal with his conscience and to turn his life around. Despite his lamentable treatment by the unseeing Richard, he provides unremitting and compassionate caregiving for him and his not-so-welcome visitors, with growing resignation and acceptance of who they are, how they behave, and what they’ve done – perhaps recognizing in them a mirror of himself. Murray masterfully captures all the regret and anguish of his introspective protagonist, while embodying the play’s titular concept (based on the Old-English elegiac poem of the same name) of a man making his way through the hardships of life, in his search for a righteous path to happiness and salvation. We can’t help but root for him to succeed in his quest.

Adding comic relief to the story is the brothers’ good friend Ivan Curry, played with endearing affability by Michael Mellamphy. Ivan lives in a perpetual drunken fog, unable to find his glasses, to recall where his car is, to recognize his own wife on the street after leaving a pub, or to understand why she would then start a fight with him in front of their kids. He has convinced himself that he means well, staying out drinking with the guys to be congenial and social at Christmastime, then erupts in childlike tears because his spouse sees things differently, remaining ever clueless as he happily has another drink. And adding further conflict between the brothers is Tim Ruddy as Sharky’s self-confident rival Nicky Giblin, now living with his ex, who arrives after an extended pub crawl with the uninvited Mr. Lockhart, facilitating a final showdown in the group’s momentous poker game.

In his pivotal role as the anomalously natty, well-spoken, and enigmatic Mr. Lockhart, Matthew Broderick’s Irish accent is not consistently convincing, and his understated delivery of McPherson’s lyrically sinister passages about hell and the threats of eternal damnation lack a menacing tone. But the steady revelation of his increasingly diabolical presence is enhanced by ominous howling winds (sound by Ryan Rumery and M. Florian Staab) and infernal red lighting (by Brian Nason) that underscore the character’s identity and contribute to the otherworldly elements in McPherson’s comic morality tale.

In the end, after a witty plot twist that you won’t see coming, The Seafarer is a sardonic celebration of the joy of being alive, the inherent potential it offers for making choices that could lead to a better future, and a sobering reminder that, as good as it sounds, you probably shouldn’t drink to that. 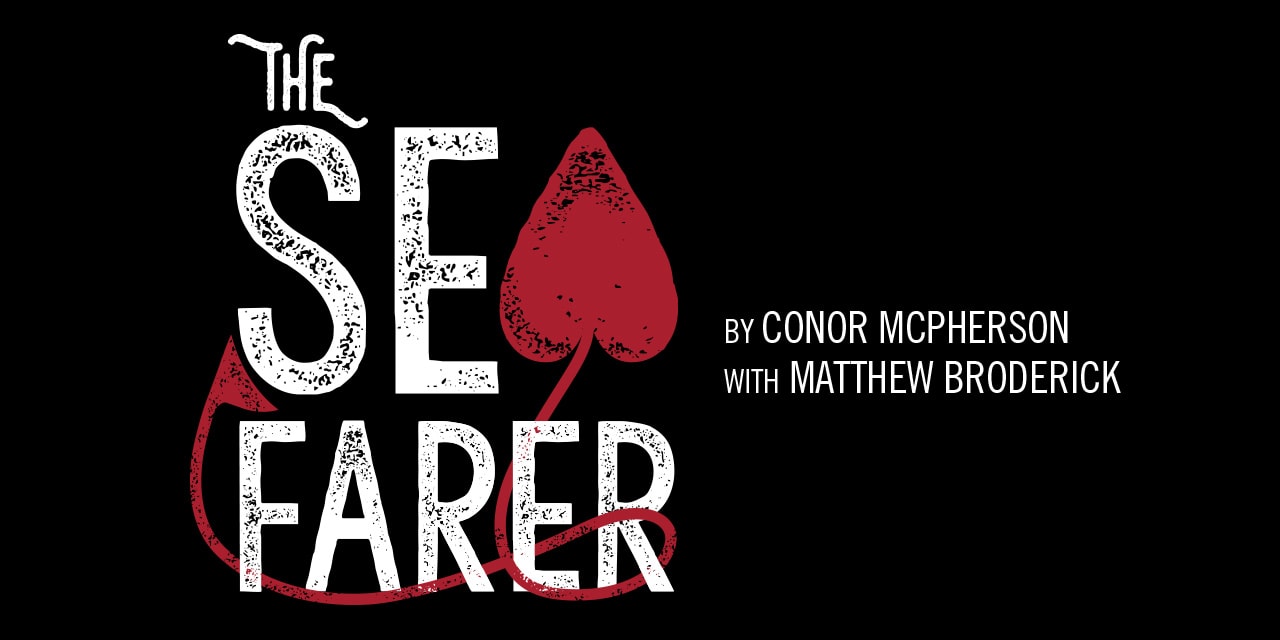