Promoted as a hilarious send-up of Christian boy bands, Altar Boyz, with music and lyrics by Gary Adler and Michael Patrick Walker, delivers witty lyrics sprinkled among twelve songs. The storyline consists of the premise that the audience is experiencing the last stop on the Altar Boyz tour, during which they wish to save any wayward souls in attendance.

Without much of a story and the scantest of character development, the success of Altar Boyz hangs on the five cast members’ ability to hit every step, word and note with synchrony, accuracy, and verve. That is a very tall order.

The order was served up best by Mark (Michael Mattocks) who sashays his way across stage throwing sparkling smiles, spot-on rhythm, stylized vocals, and a whole lot of attitude. He holds the group together and brings down the house with his solo turn on “Epiphany” in which he discovers that, despite all of his oddities, he has friends.

Seven of the evening’s 12 songs are performed by the ensemble. The best group number, ‘The Miracle Song,’ starts with rap by Juan (Nick Cox) accompanied by Abraham’s (Matty Montes) beatbox and segues into a church throw-down with gospel riffs by Mark and call and response including Luke (Evan Neufield) and Matthew (Justin Douds).

Matthew, cast as the AltarBoyz leader, is earnest throughout. His star turn comes in  ‘Something About You,’ sung to an object of desire from Bible sleep-away camp with lyrics redolent with support of abstinence .. ‘ knowing it is right … even though it makes my Levi’s tight…’

Luke’s ‘Body, Mind & Soul’ would fit at a tent revival, delivering irreverence with its resounding declaration, ‘who needs a G-E-D, I got my B-I-B-L-E.’  Juan’s ‘La Vida Eternal’ is accompanied by potentially dramatic choreography.

The producers, Meg Evans and Stew Remer, and director,  Paul Loebach, need to give the cast more to work with. The set is a black box; in the back is a relatively small screen of the ‘soul sensor’ that registers the number of souls to be saved. Cast members are attired in black pants, white tops, and black shoes. Only Mattocks’ costume differentiates his character from the others. The Star of David adorning Abraham’s chest doesn’t do enough to set him apart as the Jewish member of this Catholic group. The choreography, where individual styles could shape character, outstrips the ability of some of the cast.

Hidden behind the scenes, the orchestra, under the direction of Paul Rossen, is often the life of the party.

Running Time: One hour and 30 minutes, with no intermission. 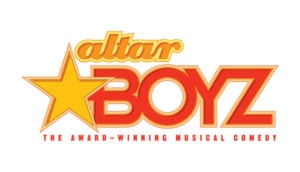