Time has not been kind to Great Dead White Male Artists, poor things. Nosey feminist historians have been poking around in these guys lives and digging up dirt about how they treated women! And now and then a cheeky feminist playwright will come along and dish up the drama on stage! Like for instance Amanuensis, Lauren Feldman‘s fanciful takedown of John Milton. You know, that 17th-century English poet revered for his epic 12-volume Paradise Lost in which he presumes to explain the ways of God to man? Well, Feldman—who identifies as not only feminist but queer—has had the temerity to explain the ways of Milton to women!

The play starts off with Deborah, youngest of Milton’s three daughters, announcing to the audience: “My father is a misanthrope.” Her sister Anne later amplifies: “My father did not exude beatitude.” And in a verbal smackdown as imagined by Milton’s oldest daughter Mary, she slams him to his face: “You inconsiderate chauvinist arsehole.”

These three sisters’ grievance was legit. By the time Milton began work on Paradise Lost he had gone blind and the mother of his three girls had died giving birth to the youngest. He remarried but that wife died too. So he made up the verse in his head and dictated it to his daughters, requiring them to write down every precious word. This went on for seven years, and all the while Milton kept them functionally illiterate. When he died he made his third wife Elizabeth his sole heir and disinherited his daughters, calling them in his will “unkind children…very undutiful to me.”

And so topples another GDWMA from his privileged pedestal in patriarchy.

Upon learning this grim backstory, the playwright (billed in the program as L M Feldman) was more than infuriated; she was inspired. She saw in it a storytelling opportunity to imagine the three daughters and to give them the imagination to transcend their plight—a chance to look back at the sisters in their time and reconceive them now as modern sheros. Feldman titled her play Amanuensis (which in Latin means “slave with secretarial duties”) and subtitled it “a tale, a grapple, a loosely historically inspired feminist fantasia”—which the Georgetown University Theater & Performance Studies Program took as an open invitation to stage some serious fun.

Indeed the best parts of the play are the several scenes when the three daughters—Mary (Kate Ginna), Anne (Michaela Farrell), and Deborah (Healy Knight)—cut loose and play-act. There’s an episode in which, trying to explain how they were made, they pretend to be men and amusingly emulate wearing trousers by hiking up their long skirts between their legs. (Costume Designer Debra Kim Sivigny, a professor at Georgetown, has created a wonderful wardrobe that locates the period yet suggests levity.) There’s the aforementioned scene in which Mary imagines telling off her father. And there’s an amazing scene of tableaux vivants in which the three sisters pose as they have been posed in famous paintings that idealize a benign paterfamilias and his fond progeny (the very paintings that one could view as reproductions in the lobby beforehand).

The student cast handled their roles and scene transformations well. The thankless part of Milton was played gamely by Alex Prout. As written the character is a charmless egoist, which the play’s logic requires but which does begin to grate. Happily, two other fine gents appear, Thomas (Travis Fujita)—who gets asked by one of the daughters, “How will I ever stomach marrying one of your sex?”—and Young Man With News (Jonathan Compo). We also meet Milton’s third wife, Elizabeth (Madelyn Rice), who doesn’t have Milton’s number as the daughters do.

Though it can be awkward when writing about a student cast to single any actor out, the performance of Healy Knight as youngest daughter Deb calls for special mention. Knight captured a cockiness and sassiness in the character that enlivened the entire play, and her moment-to-moment technique was extraordinary.

Director Maya E. Roth, also a professor at Georgetown, introduced the performance I saw by commending the collaboration that had gone into it, from students, guest artists, faculty, and alumni. And indeed, remarkable institutional resources had been allocated to bring Amanuensis to the stage, including developmental readings with professional actors and multiple residencies for the playwright. In the process, Roth said, the script, had undergone eight rewrites.

The project’s heart is in the right place, and one can easily admire the dedication with which this play has been mounted. The story of John Milton’s usurpation of his three daughters’ labor for the glory of his godlike legacy, and their subsequent erasure from history, is one that needs to be known. Feldman’s script and Roth’s direction give it a good college try. But the problematic poet at the center of it, the character who incited the action by his hubris, is also the play’s dramaturgical problem. No matter how much fantasia the three daughters devise—and there’s a whole lot of it to delight in—there’s always that flat static bad dad sucking the life out of it. 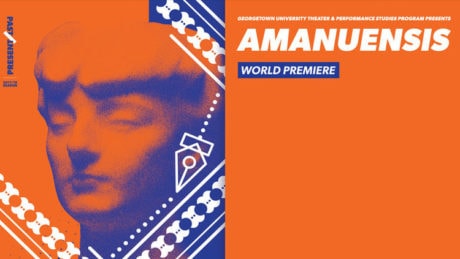