Jenna Cook was always a fan of movies and documentaries. She enjoyed watching and listening to stories told well, and she was entranced by documentaries with a social conscience, like Ava DuVernay’s 13th. But she never thought she’d produce her own movie.

Then, on October 1st, 2017, Cook went to a concert in Las Vegas, where she survived the deadliest mass shooting committed in the United States.

After that, Cook, a public health worker, changed her mind about helming her own project. She started work on When Prayers Aren’t Enough, a documentary that shows what it’s like to be the survivor of a mass shooting.

“News crews leave after a mass shooting,” said Cook, who’s interviewed fellow survivors of the Las Vegas shooting. “There’ll be a two-week news cycle, and then it dies down. The adrenaline lowers. But the people who survived have to go back to work and school.”

In order to break the cycle – the cycle of a shooting, a media circus, an explosion of “thoughts and prayers” on social media, and then an eventual return to normalcy – Cook turned to storytelling as the most effective way to reach her audience. She wants to use When Prayers Aren’t Enough to break through the political barrier that seems to always appear after a mass shooting: a barrier embodied by the men and women in suits who speak on weekend talk shows, and the politicians who stall gun reform bills, and the gun rights activists who spread the fear that any laws will take away Americans’ right to bear arms.

Cook isn’t the only one relying on compelling stories to spread a message about gun control reform. Playwright Michael Kimmel, who rose to prominence writing books for musicals like The Last Goodbye and Songbird, wrote the searing satire Dog Whistle in 2015 as a response to the Charleston church shooting. He wasn’t sure what to do with the play until two years later, though, when mass shootings began to hit the news cycle with regularity.

Then, after the Parkland shooting on February 14, 2018, Kimmel made staged readings of Dog Whistle available to theater artists around the country. He asked only that the theaters donate a portion of their proceeds to their local chapter of Moms Demand Action. Since the Parkland shooting, Kimmel has received over 70 requests for the Dog Whistle script.

Dog Whistle tells the story of a Senate race in Ohio, where two candidates – one an upstart Republican, the other an incumbent Democrat – speak and act in increasingly absurd ways as they vie for the Senate seat. The play is funny until a mass shooting in a local daycare center sends the two campaigns spinning into territory the candidates don’t know how to tread.

“Rage moved me to write this,” said Kimmel. “I really got incensed watching people go on the Sunday shows after mass shootings and then pivot away from the gun control discussion, from the mass execution of hundreds of citizens of this country.”

In the days following each mass shooting, Kimmel listened to talk show guest after talk show guest segue from gun control into a discussion of mental health. “When you see a person do this multiple times,” Kimmel said, “you start to see the machine behind it. That was hysterical to me. And I don’t mean ha-ha funny. Politicians were discussing the slaughter of people in Las Vegas as if it were, say, infrastructure.”

As Kimmel flipped through a host of political commentary shows after the Las Vegas shooting, Cook was still reeling from what she’d experienced in Vegas, where she was meant to be vacationing. But it didn’t take long for her to start developing the concept for When Prayers Aren’t Enough. “The story is close to my heart and I want to tell it right. I don’t want to tell it from an outsider’s point of view,” she said.

Cook began assembling the funding and manpower she’d need to make the documentary. She teamed up with Matt McClelland and Matt Lynn of Bridge the Divide Media and created a GoFundMe in order to raise production money.

Cook and her team have conducted several interviews so far, including those of Las Vegas survivors like best friends Dana and Karen, who shared the same bullet (it went through Karen’s leg and hip and Dana’s calf).

“We have to carry such a burden,” said Cook. “Even though we survived. It’s the same with the Parkland kids. They have to continue their lives after seeing their classmates shot.”

Cook and Kimmel aren’t just creating well-constructed art: they want change. Both Dog Whistle and When Prayers Aren’t Enough offer solutions to the mass shooting epidemic that the United States currently faces. To do that, they’re using stories – real for Cook’s documentary, fictional for Kimmel’s play – to persuade audiences that mass shootings can be stopped.

“No major social change in this country has ever happened without the aid of storytelling,” said Kimmel. “That’s one of the reasons why I’m using a play to tell this story.”

Dog Whistle is meant to lay bare the political smokescreening that happens after each shooting. The real topic of discussion should be reasonable gun control tactics rather than the frenzied pointing of fingers at other possible causes for shooters’ behavior, Kimmel said. “You should not respond by pivoting to mental health. It reads hollow in real life, and it reads hollow in the play.”

In addition, Dog Whistle shows that constituents can and should hold politicians responsible for how they legislate. Democrats shut down Congress over DACA, and though they didn’t end up getting the deal they wanted, they shouldn’t budge on gun control, either, Kimmel suggested. “That kind of tactic needs to happen to move legislation for gun control. When children are getting slaughtered in schools, that’s when you shut things down.”

In Cook’s opinion, moving the needle on gun control means showing people the truth of mass gun violence. “Some people seem to think that the left is coming for all guns. That’s not realistic, but people are fearful. It’s the same fear that makes people call gun violence survivors ‘crisis actors,’” Cook said, adding that she’d seen people describe her as a crisis actor. “People would rather believe that this can’t happen. They don’t want to be scared going into a movie theater or a classroom.” 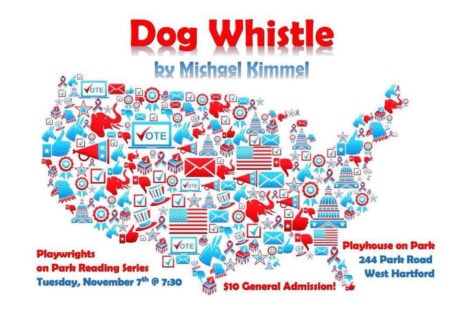 Cook and Kimmel both believe that gun control isn’t tied to party lines. Many Las Vegas survivors are Republican, Cook noted. Instead, the best solutions come from pushing for common-sense gun legislation regardless of Democrat or Republican political affiliation.

Most importantly, people feel energized to act when they watch a powerful play or movie together. Just absorbing stories like Dog Whistle and When Prayers Aren’t Enough can create momentum for change, Kimmel suggested.

He described the first reading of Dog Whistle, which took place in West Hartford, Connecticut, about 40 minutes away from Sandy Hook. Afterward, he and the cast had a discussion with the audience., an experience he found both emotional and inspiring. “I hope this show, and others like it, can become a way for the community to organize,” Kimmel said.

Mass shootings aren’t stopping, at least not yet. As of April, at least 58 mass shootings have taken place in 2018. But Kimmel, Cook, the Parkland survivors, and others like them continue to showcase the power of storytelling in curbing gun violence.

Find out more about Jenna Cook and When Prayers Aren’t Enough.

Put on a reading of Dog Whistle.

Learn how to take action against gun violence.