Mid-century aficionados and other interested earthlings can take a time-traveling trip back to the ‘50s at St. Luke’s Theatre with the Off-Broadway premiere of It Came from Beyond, a silly musical parody of vintage-style sci-fi, comic books, Cold-War propaganda, and song and dance by Cornell Christianson (Writer), Stephen M. Schwartz and Norman E. Thalheimer (Composers and Lyricists). Directed by Jim Blanchette with an eye on kitschy humor, the show is chockful of nostalgic references to the popular culture of the era, encompassing everything from Aqua Velva After Shave to poodle skirts, UFO sightings to Nikita Khrushchev’s bald head.

Set in a high-school classroom in the 1950s, science-nerd Harold (Clint Hromsco) has been teamed by his equally-geeky widowed teacher Mr. Fielding (David R. Doumeng) on an assignment with Steve (Bryan S. Walton), an underachieving bully and domineering boyfriend of Fielding’s daughter Becky (Kayleen Seidl), on whom Harold also has a crush. In order to win the affections of the smart, sweet, and pretty girl, and to save her from the clutches of his rival, Harold must decipher the hidden code in the eponymous comic book he’s engrossed in – a goofy fantasy of Communist spies and invaders from outer space against which the American military, US intelligence, scientific experts, and concerned citizens must fight – which comes to life in his mind while reading the story and simultaneously developing the all-important “strobotometer” for his science project.

Christianson’s narrative structure moves back and forth between the two parallel stories, with the cast performing the dual roles of analogous characters in each. The performances are campy and fun, capturing the familiar stereotypes of high-school teens and instructors, the paranoia of the Red Scare, and the threat of extraterrestrials, without being so over-the-top as to become annoying (though Natalie Michaels seems a bit too casually anthropomorphic and not robotic enough for the role of the beeping computer Vera). Bits of sexual innuendo and double-entendres are delivered by the outstanding Kaitlyn Baldwin, who doubles as the sexpot Private Jayne in the comic book and the school’s sex-starved Home Economics teacher Ms. Benson (who would have been called “Miss” in the day), continually flirting with the upright Mr. Fielding.

Although the number of female uniformed soldiers in the cast is another anachronism in a time when the majority of recruited Army women served as nurses and wore skirts, not pants, they contribute immeasurably to the fine musical harmonies of the show (Music Direction by Austin Nuckols). Vocal solos by the featured actors, however, are sometimes weak and off-pitch, lacking the melodiousness of the lead actresses and the richness of the full ensemble (rounded out by Ryan Ball, Alexandra Kara Dominguez, Maureen Duke, Adam Kee, and Danicah Waldo) – all singing to, and often overpowering, the lackluster tone of the pre-recorded score.

A true highlight of the show is the out-of-this-world retro-style choreography by Mark Blowers. Among the most amusing numbers are “Daddy’s Girl” and “Fifties Kind of Guy” (with Swing, Bop, and other rock-‘n-roll dances that pay homage to American Bandstand) and “I’m Blank” (with zombie-like movements by the victims of alien mind-control that evoke the B-movies of the period). The live action is enhanced by simple color-coded lighting by Maarten Cornelis (red for the Commies, green for the space aliens), period-style costumes by Jennifer Anderson that identify the professions and personalities of the characters, and background video projections of film clips from such ‘50s sci-fi classics as Invaders From Mars and Plan 9 From Outer Space that are parodied in the production.

Despite the inconsistent vocals, absence of live musicians, and an early 7 PM curtain time (this brand of wackiness might benefit from a late-night slot), It Came from Beyond is a lively send-up of the genre and the socio-political climate of the decade. 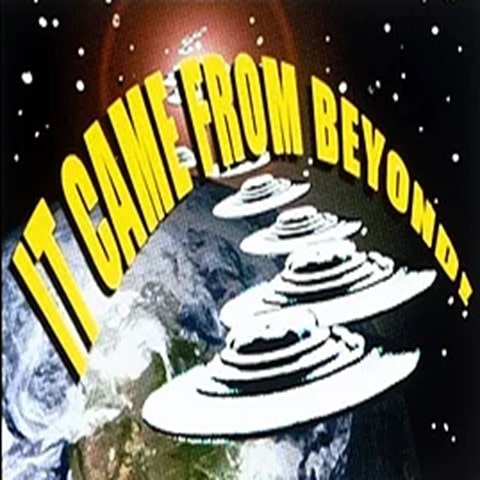 A Palestinian playwright sees allegory in occupation, in ‘Keffiyeh/Made in China’ (Ep. 7)

Broadway reopens with ‘Pass Over’ at the August Wilson Theatre