You know the story. South Pacific brings a classic tale, outstanding voices, lively music, and a living set to Capitol Hill this month. Opening night offered plenty of energy for audiences to enjoy an evening on the New Herbrides Islands.

The crew and ensemble help to move the two-hour-and-40-minute production along when it drags. Patrick McMahan does yeoman’s work as Luther Billis. Close to twenty singers and dancers are fantastic, particularly during the Thanksgiving show scene.

The set uses a screen backdrop for a variety of “stages” that move the action from island-to-island, office-to-living room etc. Frank Mobillo did a magnificent job with set and projection design. From the black-and-white stills of cast members set in World War II to the luster of the ocean and islands, Capitol Hill has never felt so tropical. Jeffery Scott Auerbach and Kimberly Crage complimented the sets with perfect lighting effects.

Music Director Mark Prioleau and his ten-member orchestra did a swell job of capturing a smooth, relaxing, early 1940s sound. Director Terry Spann stays true to the time-tested formula of racism as an obstacle to love for the St. Mark’s Players. In the story, one self-described “hick” – Nellie Forbush, the US Navy nurse from Little Rock, Arkansas – eventually sees past her racist upbringing to win a fantasy love.

Leslie Lewis, as Ensign Nellie Forbush, is an experienced singer and does well with all of the songs, especially “I’m in Love with a Wonderful Guy” and “I’m Gonna Wash that Man Right Outta My Hair.” Much of her acting, at least until the final scene, is about as corny as Kansas in August. Her Nellie Forbush is full of energy and acts well but a bit too naive to be believable.

Her love interest, Emile de Becque (John Cattaneo) carries the stage when he is on it with his baritone and acting skills. His “Some Enchanted Evening” is classic Rogers and Hammerstein. De Becque’s “I’m Gonna Wash that Man Right Outta My Hair” provides much needed comic relief, but his timing could be better.

The other romance was not so lucky. It seemed doomed from the start on opening night. Bloody Mary (Tamieka Jones) was drowned out by the orchestra during “Bali Ha’I,” the song vital to handsome young Lt. Cable (Jerrod Laber) falling in love with Mary’s daughter Liat (Regina Childs).

Songs are treated like extensions of the dialogue and are part of the plot in this musical. By the time Bloody Mary sang “Happy Talk” in Act Two, however, bringing Cable and Liat together, the sound crew had the vocals and orchestra blended well.

Lt. Cable offers a powerful rendition of “You’ve Got to be Carefully Taught,” which helps to explain his inner conflict between desiring an island girl but not wanting to take her back to his world. A short scene has them spend time together and Cable shows passion one of the few times in the production singing “Younger than Springtime.” Laber is a classically trained tenor, but his non-verbals and dialogue are uninspiring.

Director Terry Spann wants to challenge viewers to speak openly and honestly about matters involving race. South Pacific certainly has since the 1940s. But the production by the St. Mark’s Players adds little to the conversation. The audience may receive no new insights into this well-sung classic, but the music is still spectacular. 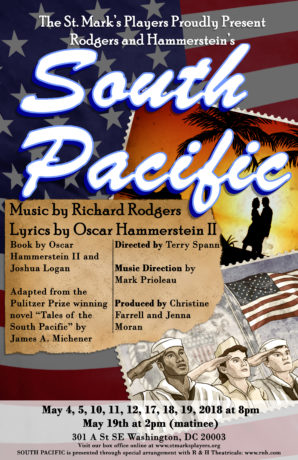