The Speed Twins by Maureen Chadwick is presently playing at Venus Theatre in Laurel Maryland. This is the National Premiere of the British drama and is directed by Deborah Randall who is also the Founder and Visionary of Venus Theater.

The play’s parallels to Jean-Paul Sartre’s play of purgatory, No Exit, are undeniable. Three characters are forced into this world, not heaven and not quite the flames of hell, one person drawn to a character who does not reciprocate her advances and all tormented by past deeds. However, unlike No Exit, these characters are marked not by some horrible deed, like murder, but by being human. They have hurt the ones they love, they drink a little too much or they are drawn to members of their own sex.

Two of the characters, Queenie (Nancy Linden) and Shirley (Ann Fraistat) were briefly lovers in their youth. Queenie could not deal with the societal stigma of being a gay woman in the 1960’s and ended the relationship. This happened around the time of a motorcycle accident that involved Queenie and Shirley. Shirley is left permanently disabled. In this netherworld, Queenie has grown older but Shirley’s outer appearance is the same as it was at the time of the accident.

After the accident, Queenie has rejected all attempts to reconcile with Shirley, but she could never quite suppress her feelings. Shirley has never gotten over the hurt and pain of the rejection. Both never really followed a gay lifestyle, and both married and had a daughter.

Part of the trio is Ollie (Jane Petkofsky). Ollie is dressed like Oliver Hardy. This is a homage to the characters in the movie (and play), The Killing of Sister George which dealt with lesbians in England and was quite scandalous at that time. The play takes place at the Gateway Bar which was the only known congregating place for lesbians in the London area at that time. The movie was shot there and had repercussions on the lesbian community in London at the time.

Contrary to the group if characters in No Exit, these are likeable characters and we are sympathetic to their hardships. Queenie and Shirley had to pretend to be something they were not and had to walk away from their true love due to social norms of their time. Ollie who allowed herself to walk that path of the female who dresses as a male, is still racked by guilt for scorning her true love many years ago and never quite fitting into society. Both have pushed her to consume alcohol to soften the hurts.

In Act II all three are given a chance at redemption through reincarnation. The suspense is will they accept who they are or will they want to live life again in a more “normal” skin. This is an interesting a provoking question for us all. If given a chance, would we still want to be who we are or would we want to change? Can we remain true to ourselves?

Deborah Randall does an artful job in creating this spectral world. Under her guidance, the three very talented actresses shine. I particularly enjoyed the way Randall uses the round bar table to create tension and hurt. Even the bar becomes a piece of furniture for lying down, sliding on or just sitting.

Linden carries off the role of Queenie from aged beauty contestant, to spiteful mother and former lover to a person who begins to understand who she really is. She does this transformation seamlessly. Her confrontation scene with Shirley (Fraistat), Queenie’s spurned lover, is a very dynamic and revealing.

Fraistat brings depth to Shirley. She may still look 20, but her personality reflects her life experiences. Her scene when Queenie tries to cure her impediment is another memorable scene.

Petkofsky as Ollie is the comic relief. She drinks too much and is more likely to tell us the truth about herself. However, she reveals that she is tired of being different and part of her still longs to be “mainstream.” Her revelation of her past love is poignant and insightful.

The set by Amy E. Belschner Rhodes creates the image of the London gay bar scene. I really appreciated the pictures on the wall of scenes from the movie The Killing of Sister George. There were just enough angles and various shapes to keep it interesting without much color (most of it is black and white).

The lights by Kristin A. Thompson and sound by Neil McFadden also create the feeling of a social club in purgatory.

In the cast in non-speaking roles were Lynn Bruce and Myrrh Cauthen as the Powers that Be.

It was recently announced that after some concern that it would have to close, Venus Theatre will continue at its present location in Laurel. There is always a place for cutting edge woman’s theater, and we are happy they will be around next year.

Zip on down to see The Speed Twins. It will make you think and maybe understand how the gay community has evolved since the late 1960’s and even since the mid-1990’s. 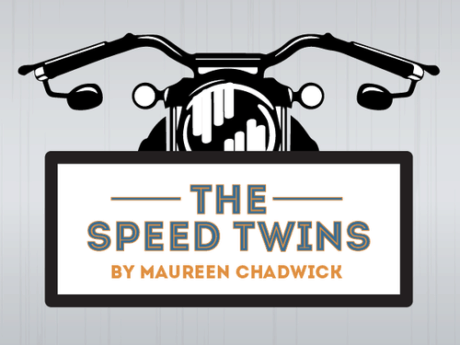 The POWERS THAT BE: Lynn Bruce Myrrh Cauthen