If KISS were starting out today, they’d be trying to get noticed on a streaming music site like Spotify. And followers would find their tour dates on apps like Bandsintown. Or maybe the masked marvels would land a recording contract simply by racking up views with a vid on YouTube. But back in the pre-digital day, the music scene was different, not only for performers and fans but for local presenters and venue owners.  Turns out those seismic shifts in the music industry could precipitate some poignant backstage family drama, as we learn from Playwright Laura Eason’s fond tribute to that time, The Undeniable Sound of Right Now.

For anyone torn between whether to check out an edgy rock club or catch some captivating characters on the legitimate stage, Keegan Theatre’s DC premiere of Eason’s play has got you covered. As directed with verve and grace by Brandon McCoy, The Undeniable Sound of Right Now is rockin’ live theater about live rock music.

The play is set in 1992 in Chicago at a grungy rock-band bar owned by Hank, who for a quarter-century has hosted shows by a who’s who of up-and-coming and now name-brand bands. Both Hank’s Bar, as the dive is called, and Hank himself have become legendary. As executed by Set Designer Matthew J. Keenan and Properties and Set Dressing Designer Cindy Landrum Jacobs, the joint’s fading glory is evident in every dank detail. There’s cheap beer on tap, a messy collage of paint and posters on the walls, crushed plastic cups and other trash from last night’s bash on the floor. A sign in a hallway reads: “We know our restrooms suck. Deal with it.” We get the picture and almost the stink. And Sound Designer Veronica J. Lancaster selections of pre-show and inter-scene tracks from the likes of The Clash, Gun N’ Roses, Bush, and Nirvana are a mellow time tunnel for those who were around back then.

The play sets out to dramatize a point in pop culture history when DJ’ed raves were in ascendance and live-music venues were losing business. And the crux of this conflict gets played out in a father-daughter relationship that is as moving as any I’ve seen on stage. The very compelling Chris Stezin plays fifty-something bar owner Hank, a man whose place in the rock-scene sun still shines for some but is slowly but surely being eclipsed.  His scrappy, adoring daughter Lena, ebulliently played by Jessie Power, can go toe-to-toe self-assuredly with her dad or any other man.

The going between dad and daughter gets tough when Lena begins dating a hip DJ named Nash. “I hate DJs,” says Hank bluntly. We sense some of a father’s familiar angsting when the daughter who loves him now falls for another man. But with this suitor, the stakes are even higher because Nash represents the music-biz competition, the next wave, the crowds that won’t come round anymore—and Hank’s “dated taste.” Hank waxes nostalgic about “a time when music meant as much as anything,” “when music sent people out of their minds.” And in Ryan Sellers’s nimbly emotive performance as Nash, we see both the charmer Lena fancies and the future Hank fears.

There’s a family backstory. Lena’s biological mother was an addict and is out of the picture. Lena was raised by Hank and his second wife Bette, now his ex, who is complicatedly still around, and agitatedly portrayed by Susan Marie Rhea. The bar’s history is itself almost a character—Stevie Nicks, KISS, The Clash, and other names are dropped.  And Hank’s sole employee Toby—who sweeps up, keeps the books, and has a crush on Lena—is an adorably awkward nerd in Kevin Hasser’s warmly amusing performance.

The plot sputters a bit when the landlord’s son Joey shows up demanding a 20 percent hike in the rent, at which point Lena and Nash concoct a plan to raise cash by throwing a DJ’ed rave in an adjacent empty warehouse. The unsympathetic rent-collector twist is a tired trope, but Josh Sticklin’s menacing yet ingratiating turn as Joey is so fun to watch we don’t mind.

Eason can get to the emotional core of her characters, though, in surprising ways. Hank, for instance, has a heartbreaking speech to Lena in which he remembers the feelings that accompanied his decision to raise his motherless child:

I can’t stop loving you.

And we do not hear a catchy song hook. We hear the all-access feelings of an honorable father for his child.

For fans of both live rock music and live theater, Keegan Theatre’s production of The Undeniable Sound of Now is a terrific twofer. It’s got a heart that beats like a drum kit, and it packs a wallop like a subwoofer.

Running Time: One hour 55 minutes, including one intermission. 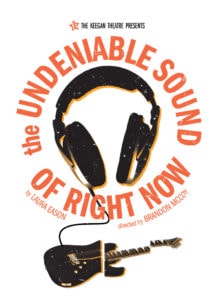