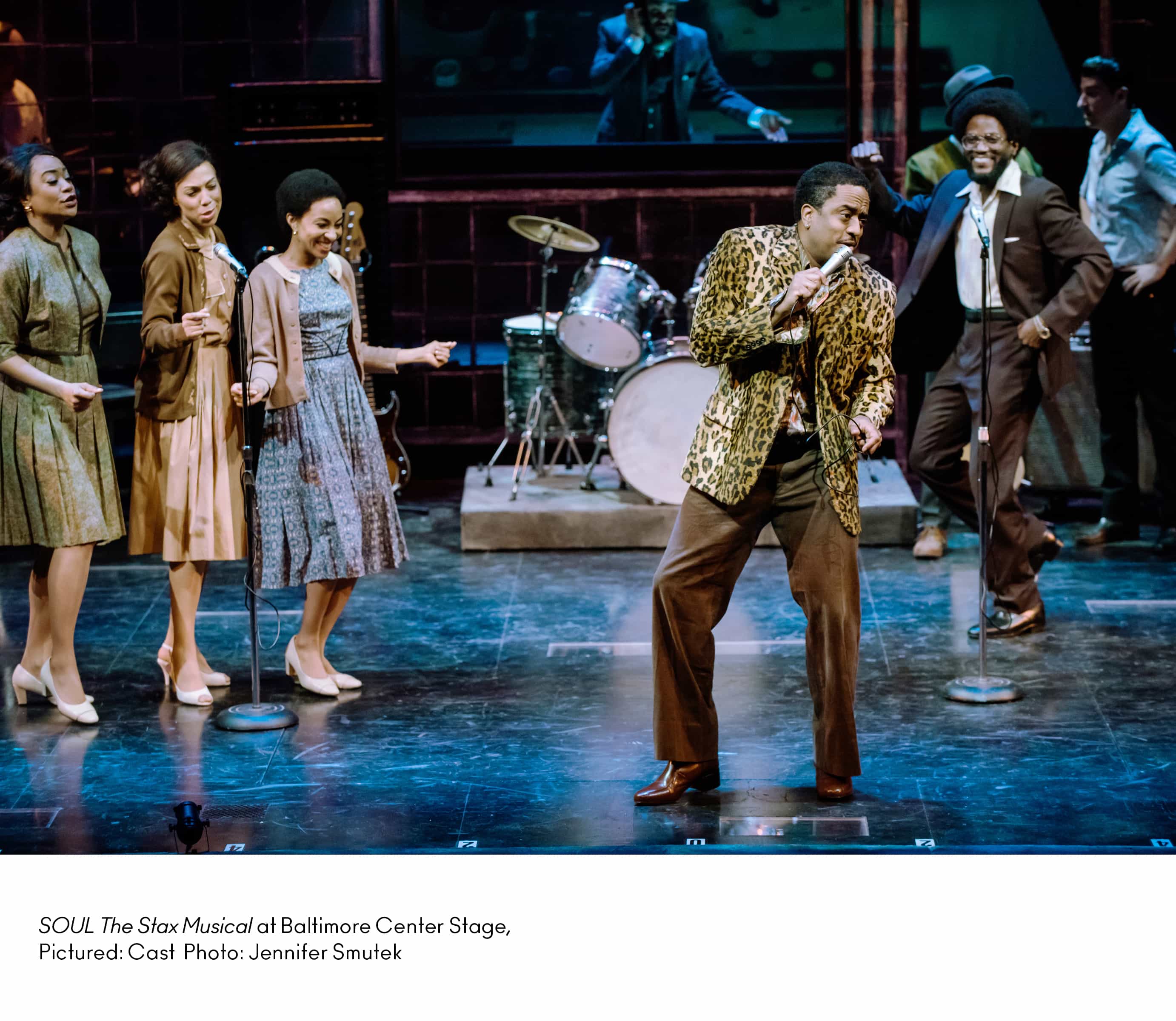 Chronicling the founding, heyday, and demise of Memphis, Tennessee’s Stax Records, from 1960 to 1975, SOUL The Stax Musical, in its world premiere, was not simply directed, but willed to glorious life by Baltimore Center Stage’s departing Artistic Director Kwame Kwei-Armah. With a book by Matthew Benjamin, choreography by Chase Brock and phenomenal music by various Stax Records artists like Isaac Hayes, Rufus and Carla Thomas and The Staples Singers, this musical’s future as a Broadway and touring regular should be mandatory.

Kwei-Armah made sure a festive tone was set even before the first player touched the stage; the festivities began in Baltimore Center Stage’s record-label-decorated lobby with DJ Jam Master Swing, a singer and dancers, and on-the-wall projections of Stax Records artists in concert.

Kwei-Armah made full use of the space, including ramps that extended out into and under the audience and his placement of actors as far up as the balcony. Scenic and Co-Projection Designer David Gallo and Co-Projection Designer Alex Basco Koch made brilliant use of old Stax Records footage and were even able to project live performers on the upstage scrim in real time. Travante Baker helped keep the onstage dance moves humming as Dance Captain. 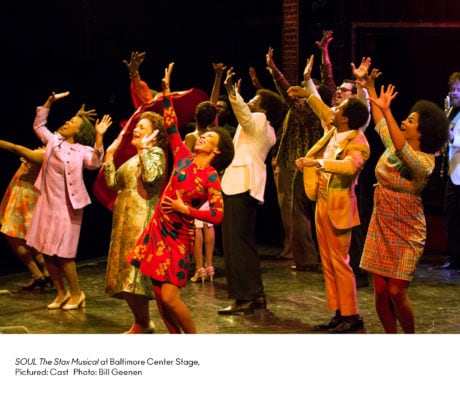 Playwright Matthew Benjamin’s musical began with Satellite Records founder Jim Stewart approaching his older sister Estelle Axton for financial help to buy a console recorder for and relocation of what would become Stax records, so named by combining the first two letters of Stewart and Axton’s last names. Relocated in an old theater, with the converted concession stand serving as the Satellite Record Shop, Stax Records began to change the musical landscape of the ’60s and ’70s with its distinct brand of Southern funk.

The story touched on everything from a white record company executive dealing with skeptical black musicians; historical events like the striking down of Dr. Martin Luther King Jr. in Memphis; the shark-like nature of the music business, and one of the central questions of the play: Could Stax records rival the top record labels like Motown and Atlantic?

This show will make you feel like you were in a concert. I was mesmerized by Allison Semmes, in her Baltimore Center Stage debut, as Carla Thomas. Her rendition of “Gee Whiz (Look at His Eyes)” was heavenly.

The incomparable Harrison White absolutely slayed as the magnificent recording artist that was Rufus Thomas. With costumes copied by Costume Designer Dede Ayite from what the real Rufus Thomas wore, including an outrageous multi-colored, plaid suit, and with lines like “I’m cleaner than 19 yards of chitlins!” White projected an undeniable swagger. 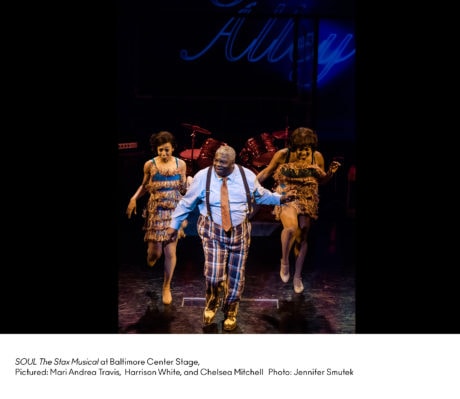 White, an NAACP Theatre Award-winner for Sarafina, also excelled in the songs “Can Your Monkey Do the Dog” and “Do the Funky Chicken,” in which he partied with audience members in the balcony.

The amazing Ricky Fante, a real-life recording artist, with an EP, Introducing Ricky Fante, and an album, Rewind, released, was incredible and moving as the late Mr. Otis Redding. His performance of “Try a Little Tenderness” was spellbinding. Fante also slayed “These Arms of Mine,” and “Respect” (written by Redding and famously covered by Aretha Franklin). His “(Sittin’ On) The Dock of the Bay” was pure genius.

Boise Holmes was dynamite as Isaac Hayes. Holmes embodied Hayes vocally and physically. I was enthralled by his renditions of “Soul Man,” “Hold On, I’m Comin,” “Walk On By” and the unforgettable “Theme from Shaft” which is not only internationally known but sometimes even parodied. Holmes has performed on Broadway and internationally as Mufasa in The Lion King. I enjoyed the South Park TV show joke about Hayes that Playwright Benjamin added in.

The classic tune “I’ll Take You There” by Mavis Staples and The Staples Singers was performed with glamour and style by Tasha Taylor as Mavis Staples and Wayne W. Pretlow as Pops Staples; they also excelled with “Oh La De Da.” Mary Jo Mecca and Taylor dueted wonderfully on “Your Good Thing (Is About to End).” Mecca showed amazing pipes.

Jon Harrison Taylor played the temperamental Wilson Pickett to perfection, and did ample justice to Pickett’s “In the Midnight Hour.” David LaMarr mimed his part well as Booker T. Jones during the instrumental “Green Onions.” 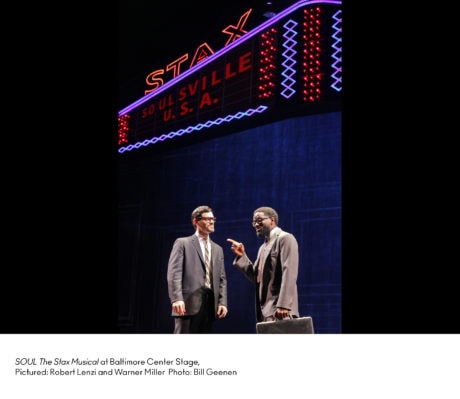 Robert Lenzi played the often clueless founder of Stax Records, Jim Stewart, who often failed to predict the best artists to sign, or what songs would be a hit (in truth, who can?)  Stewart was more about passion than business: “This music got under my skin.” Warner Miller played the radio disk jockey turned Stax Records executive, Al Bell. Kevin Carolan played fast-talking and slick Atlantic Records executive Jerry Wexler. All three performances were excellent in that they portrayed the push and push-back between a small-time record label in need of distribution and a big time, established label who could provide it.

Anastacia McCleskey was fantastic as Stax songwriter Deanie Parker, who was in attendance at the show and met many fans during the after party. The fictional Parker had a great line about a small black label striving for mainstream success: “There’s a big difference between crossing over and crossing under.”

Scott Stangland and Skye Scott played Stax house musicians Donald “Duck” Dunn and Steve Cropper (who is still touring!) respectively. Stangland, who bears a close resemblance to the late Dunn, did much in the way of body language, and with the few lines he was given.

SOUL The Stax Musical is Broadway-meets-Baltimore, standing-ovation-mandatory, and the best musical I’ve seen by a Georgia-woods mile.

Running Time: Two hours and 20 minutes, including a 15-minute intermission.