In a tent pitched on a pier overlooking the Anacostia River, there is a powerfully important work of theater being performed. The work is The Frederick Douglass Project, commissioned to commemorate the 200th anniversary of Douglass’s birth, and inspired by a visit that the great antislavery author and orator made to Ireland on a speaking tour in 1845, following publication of his autobiography, Narrative of the life of Frederick Douglass, an American slave.

The presenting company, Solas Nua, typically does Irish plays, so The Frederick Douglass Project is a departure—a spoken, sung, and choreographed cross-referencing of cultures: a side-by-side view of the African-American experience of slavery and the Irish experience of English colonialism. The result is gripping theater that gets at stuff about the meaning of race in America with extraordinary originality, relevance, and insight.

The Frederick Douglass Project consists of two sequential one-act plays: An Eloquent Fugitive Slave Flees to Ireland by Psalmayene 24, set on the ship on which Douglass sailed to Ireland, and Wild Notes by Deidre Kinahan, set in Dublin after Douglass arrives.  In the inventive conception of Director Raymond O. Caldwell and Choreographer Tiffany Quinn, the two plays segue seamlessly from one to the other, and the two writers’ voices create a rich and resonant stage world. Gary L. Perkins III plays Douglass throughout, and the seven other roles in each are played by Madeline Mooney, Daniel Westbrook, Mike Crowley, Kevin Collins, Tiffany Byrd, Louis E. Davis, and Jenny Donovan.

The parallels between what was happening at the time to blacks in America and the Irish in Ireland are central to the narrative in The Frederick Douglass Project. Douglass’s visit coincided with the beginning of the great famine. Oppression of the Irish by the English meant that the impoverished Irish were shipped off in so-called coffin ships the shipowners intended to sink—a barbaric echo of the Middle Passage. With eyes wide open, the authors of The Frederick Douglass Project look back to the period before Irish immigrants transformed from an oppressed, unwelcome social class in their homeland to become part of a white racial class in America (a history described by Noel Ignatiev in his book How the Irish Became White).

In the first play, during Douglass’s voyage to Ireland, he meets a woman onboard the ship named Susan (played by Mooney) who has come to the first-class deck on a ruse because her cabin is far below.

In the second play, Douglass meets an educated Irish woman named Margaret (Mooney again), who has been reduced to panhandling. Douglass drops a coin in her cup and she and Douglass get to talking, sharing their dreams of freedom. In the course of their conversation, Douglass tries to explain slavery to her, trying to let her know that the America she associates with hope and freedom is not what she thinks because there he is derogated on account of his black skin.

Not fully comprehending him, she asks, “What is ‘White’?”—and her question drops like a truth bomb is coming.

Douglass: White is power Margaret. White is murder. White is lies. White is money.  White is cruelty…great cruelty….boundless cruelty.  White is the whip.  White is the gun.  White is its own ruination Margaret, because deep down, deep in the bowels of white humanity, they know that slavery is wrong.
Margaret:  It must be Sir.
Douglass: I wonder will you feel the same when you see the power it might grant you? I wonder will you beat the slave yourself?
Margaret:  Never.
Douglass:  Some of your kin do.
Margaret:  My kin?
Douglass:  There are Irish Slavers, Irish Drivers Margaret. Irish men and women who crush their black brethren in order to find an American foothold of their own.
Margaret: Then they have lost their soul Frederick Douglass. And they have forgotten who they are.

Building incrementally on Douglass’s convictions about sexual and racial equality, the thematic breadth of The Frederick Douglass Project becomes breathtaking. Woven into this thrillingly theatrical performance are storylines touching on sexual abuse of children, anti-immigrant rejection of refugees, racist incarceration of black men—all viewed as if through Douglass’s eyes as aspects and adjuncts of slavery.

Psalmayne 24 gives Douglass several rousing raps that Perkins and the ensemble deliver with terrific verve. An early one sets forth the play’s activist intentions:

The Frederick Douglass Project by Psalmayene 24 and Deirdre Kinahan is a brilliantly encompassing story about the connectedness of oppressions and the common cause required to resist. Hard to imagine that Solas Nua has ever shed “new light” (the meaning of its name) to more urgently needed effect.

Catch this intense show before its tent folds.

The Frederick Douglass Project by Solas Nua runs through May 24, 2018, at the Yards Marina, 1492 4th Street SE, Washington, DC. For tickets and information, go online. 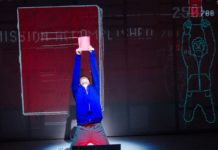