Marking its first production of a work by the internationally-lauded Dublin-born playwright Marina Carr, Irish Repertory Theatre’s New York premiere of Woman and Scarecrow, potently directed by Ciaran O’Reilly, is a fiercely candid, surprisingly funny, and devastatingly poignant deathbed reflection by a wife and mother belatedly filled with realizations, passion, and regrets about her “encroaching annihilation” and the unfulfilled life she’s lived. It’s a compelling contemporary update of the age-old theme of memento mori, delivered by a top-notch cast, with a timeless reminder for all of us that the time to be happy is now.

The dramatic four-hander takes place in the bedroom (and the unconscious mind) of the dying Woman, as she revisits the defining episodes and “small moments” of her existence with her antithetical alter ego Scarecrow, her unfaithful husband Him, and her laughably judgmental and imperious Aunty Ah. Together they paint a picture of the everyday experiences, troubled relationships, and missed opportunities of a lifetime, through a series of fast-paced scenes of intense memories, angry confrontations, and searing revelations, until death comes at last and stills her fervid thoughts.

Stephanie Roth Haberle (Woman) and Pamela J Gray (Scarecrow) provide perfect counterpoints as the titular characters, in the protagonist’s ongoing battle between her lamentable life choices and her critical inner voice. Haberle masterfully embraces a full range of emotions, from laughter to tears, rage to terror, as she expresses concern about her soon-to-be motherless children, rails against the lies and heartlessness of her emotionally abusive spouse and guardian aunt, celebrates her secret hedonistic indulgences, waxes poetic about the beauty of nature (while insightfully recognizing that the mountain and the sky “don’t need us . . . never have . . . never will”), and refuses to accept the death for which she’s not yet ready. She is active and agitated, first dancing then writhing in pain on her bed, begging for more time, and vocalizing everything she previously suppressed throughout her unhappy past. Gray captures the brutal honesty of Scarecrow, frankly questioning the Woman’s decisions, accusing her of being motivated by spite and revenge, and unwavering in assuring her of the inevitability of her own mortality. The outstanding lead performances are equaled by the terrific Dale Soules as the unwittingly maddening Aunty Ah and Aidan Redmond as the hopelessly misogynistic and callous Him (who keeps his latest lover waiting outside in his car as his wife expires). All offer fully-compelling characterizations and spot-on Irish accents, under the superb direction of O’Reilly and expert dialect coaching of Stephen Gabis.

Along with her penetrating analyses of the personalities and motivations, Carr’s expressive script incorporates telling references to the history of literature and the arts, from the universality of Shakespeare’s writing (Hamlet’s “poor Yorick”), to the romanticism of Chopin’s music, and the uncompromising naturalism of Caravaggio’s painting (The Death of the Virgin, in the collection of the Louvre). She also employs traditional vanitas iconography (with the Woman’s darkly humorous examination of herself in a mirror and appreciation of the “graveyard chic” of her emaciated visage), Biblical stories and metaphors (the Resurrection of Lazarus), and the familiar imagery of death (personified here as a sharp-beaked, black-feathered, and long-taloned crow that pecks at the Woman’s face, draws her blood, and spreads its wings to stifle her last breath).

The macabre symbolism of the story is supported by an evocative design, with an eerie cacophony of sound effects and original music by Ryan Rumery, dramatic lighting by Michael Gottlieb, and a dark foreboding set, with otherworldly fog, by Charlie Corcoran. Costumes by Whitney Locher create the frightening vision of death as a terrifying bird of prey and provide a contrast between the blond and sexy Scarecrow (in full make-up and seductive black attire) and the bare face and greying hair of the Woman (barefoot and simply dressed in a white cotton nightgown), underscoring her denial of the self she wanted to be and her lifelong “refusal to be happy.”

Irish Repertory Theatre’s powerful production of Woman and Scarecrow offers an impressive company debut of Carr’s gripping work and a stirring message about living life to the fullest while you still can. With such an auspicious beginning, we can all hope to see more of Carr in Irish Rep’s upcoming seasons. 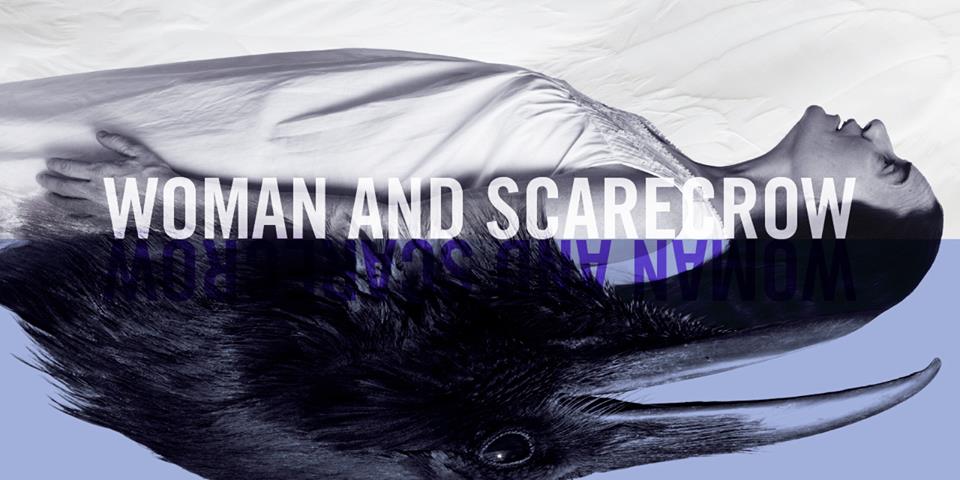