An imaginative, lyrical, and bittersweet stage adaptation of Henry James’ heartbreaking novella of 1903, The Beast in the Jungle reunites the celebrated team of John Kander (music), David Thompson (book), and Susan Stroman (direction and choreography) in a stunning world-premiere production at Vineyard Theatre. The original re-envisioning of the classic story combines the form of a memory play with dance, a musical without lyrics, and a parable told through simple dialogue, all beautifully intertwined to convey the poignancy of unfulfilled love, a life afflicted by fear, and the true tragedy of death and loss.

The non-linear narrative moves back and forth in time, as John Marcher, a successful art dealer, world traveler, and lifelong bachelor, recounts significant episodes from his past to a nephew who has just dropped in for an unexpected visit, to solicit his uncle’s advice on his current romantic break-up. From inside his apartment in present-day New York, the elder Marcher shares his reflections on May Bertram, the woman who would leave an indelible mark on his own heart and psyche, from their first meeting in Naples in 1968, to their fateful re-encounter in England in 1988, to their recent farewell at her photography exhibit in New York some 30 years later. Through it all, he is unable to shake the inner demon (the eponymous “beast in the jungle”) that has haunted him since the traumas of his childhood, rendering him incapable of committing to love and happiness while awaiting an uncertain foreboding fate.

Along with its contemporary resetting and reworking of James’ central plot, the affecting show pays homage to the groundbreaking mid-century stylings of An American in Paris (1951), with evocations of George Gershwin, Gene Kelly, and Leslie Caron in its exploration of the dramatic expressiveness of music and dance, and the power of iconic art and international locales, to capture the essence of the emotions and psychology of the characters, and the joy and tragedy of their relationship. Fusing classical ballet and the waltz with modern jazz, Kander’s lush instrumental score fluently describes the shifting moods, and Stroman’s eloquent choreography speaks volumes without saying a word, as brought to life by a masterful nine-piece orchestra and a captivating ensemble of performers. In keeping with the largely non-verbal format, Thompson’s script is appropriately minimal, reinforcing the story’s underlying sense of emotional isolation and melancholic nostalgia. It also serves up touches of humor to reveal Marcher’s avoidance of any semblance of a serious connection to love, with a risible sequence of corny couplets (e.g., “Meet me in the cloisters/I’ll bring the oysters”) in a round with an ongoing string of nameless women with whom he so blithely couples in his younger days. It’s silly and old-fashioned, and perfectly suited to the personality of the protagonist and the hedonistic era of the “Swinging ‘60s.”

The production’s phenomenal cast is in full synch with the creative concept. Peter Friedman brings an understated tone of circumspection, vexation, regret, and ultimate realization to Marcher, as he narrates the story of his ill-fated association with May and relives their defining moments in his mind’s eye. Tony Yazbeck (who distinctively doubles as the lovelorn lesson-learning nephew) delivers a potent combination of acting and dance as Marcher’s younger self, embracing the pleasures of youth, tormented by his disquieting premonitions, prone to expressing himself physically not verbally, moving his sexual conquests in and out of his life as quickly as the masterpieces he buys and sells (with little regard for their intrinsic value), then growing increasingly conflicted by his forsaken opportunities with May. Yazbeck’s superb performance and agile moves are matched by those of the enchanting Irina Dvorovenko (formerly a principal dancer with the American Ballet Theatre) as May, who embodies a wistful spirit of grace and elegance, mixed with inner strength, passion, confusion, and pain, as she ages and comes to terms with her lingering memories and unresolved feelings for Marcher – though long married to a wealthy and devoted husband (portrayed with authority by the excellent Teagle F. Bougere).

Among the most striking scenes are the tender and sensuous pas-de-deux and waltzes flawlessly executed by Yazbeck and Dvorovenko, who share an alluring chemistry; Dvorovenko’s light-hearted self-assured backstroke while effortlessly swimming away from the Italian beach to rescue a boat; Friedman mirroring Yazbeck’s movements while viewing the younger version of himself in the vanity mirror in May’s bedroom in The Cotswolds; and the company of six accomplished dancers (Maira Barriga, Elizabeth Dugas, Leah Hofmann, Naomi Kakuk, Brittany Marcin Maschmeyer, and Erin N. Moore) striking the poses of statues in the garden and recreating a rhythmic succession of postures in their paean to Henri Matisse’s ebullient painting of The Dance, which plays a key role in the story. All display the inventive wit, emotive force, and unsurpassed beauty that characterize the show, and are supported by a minimal scenic design (by Michael Curry) and abstract lighting (Ben Stanton) that contrast the realistic segments of conversation in Marcher’s apartment with the wild and distant imaginings in his mind (the visage of the stalking beast, which also references the art of Matisse, is especially unsettling).

The Vineyard’s highly-anticipated debut of The Beast in the Jungle by the legendary Kander, Thompson, and Stroman offers an exquisite synthesis of drama, dance, and music, a unique refashioning of a classic, and a timeless life lesson that implores it be heeded. It all adds up to one enthralling experience in the theater. 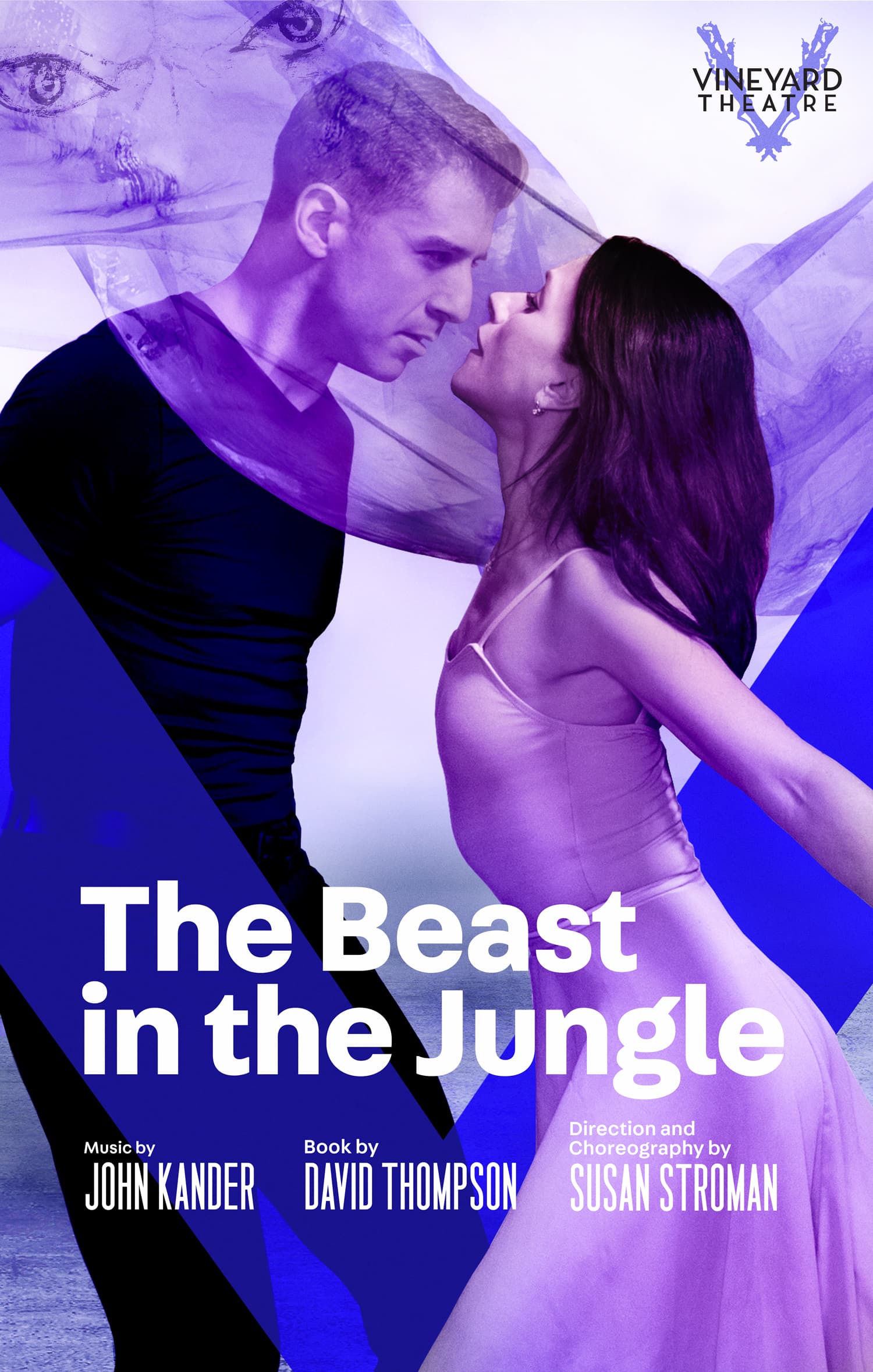