For the fourth year in a row, Monumental Theatre Company has hosted their annual event, featuring top millennial talent from the DC area. Flip Flop: A Miscast Cabaret is the latest presentation of the previously named Sex Swap. The title was updated to reflect the importance of gender identity, or as Co-Director and Monumental’s Co-Artistic Director Jimmy Mavrikes professed, because “f%@# gender!” With songs, games, and a palpable joyous spirit, the show was less of a cabaret and more of a party, celebrating inclusion and the LGBT community.

The eight-member cast, featuring Nigel Rowe, Caroline Dubberly, Farrell Parker, Tobias Young, Christian Montgomery, Ricky Drummond, Rachel Barlaam, and event host Jade Jones, sang their faces off for a solid hour and a half to some incredible arrangements and musical mashups by Music Director Warren Freeman, who also accompanied the show and lent his own killer pipes (earning the alias Warren Houston).

The opening number was “Summertime Lovin,” a brilliant combination of “Summer Lovin” from Grease and “Summertime” from Porgy and Bess.

Host Jade Jones was then introduced and sang “All I Care About Is Love” from Chicago, backed by the full company. The piece is already comical but the inclusion of tiny feather fans encircling Jones, to mimic the original choreography, was perfectly hilarious. Then followed Tobias Young, crushing Wicked’s “No Good Deed,” wearing a fabulous black cape.

Every number brought the house down as the performers kept upping the energy with each act: Christian Montgomery owning “Rather Be Me” from Mean Girls, Farrell Parker constantly topping herself with an epic mashup, “Alcohol Medley,” made up of a variety of snippets from “Red, Red Wine” to “Wrecking Ball” to “The Ladies Who Lunch,” and Caroline Dubberly’s performance of “You’ll Be Back” from Hamilton which can best be described with the affirmation “All Hail the Queen!”

Rachel Barlaam (who can somehow make everything she sings sound like it was written specifically for her) sang “Naughty” from Matilda, Nigel Rowe sang the raw and touching “I’m Not Waiting,” and Ricky Drummond played guitar and sang “How Far I’ll Go,” complete with a photoshopped image of him as Moana.

The amount of creativity put into this one-night event was simply incredible and speaks to the dedication that Monumental Theatre Company has to their work. Founders Beth Amann, Jimmy Mavrikes, and Michael Windsor have proven time and time again that they belong in the upper rungs of the DC theater scene, even winning the 2018 Helen Hayes Award for Outstanding Emerging Theatre Company.

Flip Flop was a blast, surpassing my already high expectations from seeing Monumental’s previous work. The whole show was like a musical orgasm that just kept peaking, leaving the audience fully satisfied and light-headedly giddy, but ready and eager for more. 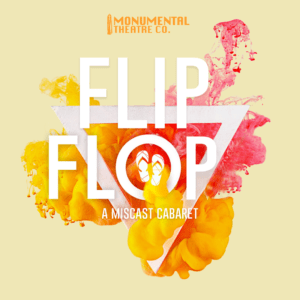