Tantallon Community Players’ current production of Hairspray is one of those shows where this reviewer wouldn’t mind seeing every performance. It’s just that damn good.

I’m saying that despite driving through a dark, raging rainstorm that would have made Noah blanch, just to get to the theater.

Hairspray is the iconic all-American musical that made its Broadway debut in 2002 and took home eight 2003 Tony Awards, including Best Musical, plus five additional nominations. Based on the 1988 John Waters film of the same name and set in the same town – Bal’more, hon – the music is by Marc Shaiman, with lyrics by Scott Wittman and Shaiman, and the book is by Mark O’Donnell and Thomas Meehan.

Hairspray is set in 1962 – 56 years ago – although its themes of race and body shaming are still very much present in today’s world.

This show is incredibly professional, from its slick, four-color, beautifully laid-out, playbill booklet through the final bows.

The cast’s precision dancing is seemingly nonstop through nearly every scene – leading some in the audience to want to get up and join in.

Back in this early Beatles era, Tracy Turnblad, a short, plus-sized teen, was in constant trouble for wearing a tall, bouffant ‘do to school. Her dream in life was to be a dancer on the Corny Collins Show, a Baltimore TV dance program based on the real-life Buddy Deane Show (and, just possibly, on a local Philadelphia production emceed by Dick Clark).

Though the show aired in black and white, it was horribly segregated. Blacks and whites did not mix. African-Americans only appeared on the show on “Negro Day,” once a month.

Tracy’s “problem” was being “plus-sized.” And, though handsome, eye-rolling Corny Collins (portrayed by a sparkling Jonathan Jackson who does quadruple duty as director, choreographer, and president of the Tantallon Community Players) was open to more diversity on the show, the show’s openly racist, machinating producer, Velma Von Tussle (Amanda Dees), wouldn’t hear of it.

The show opens with Tracy asleep in bed, on a versatile set featuring several small units that rolled on and off, or were turned around to reveal various settings. She awakens and immediately captures the audience’s heart with her stunning, glass-breaking rendition of “Good Morning Baltimore.”

She races home to watch the Corny Collins Show, joined by her best friend Penny Pingleton (Jayne Zirkle). There, her mother Edna Turnblad (funny female impersonator Kevin Buice), who has not left the apartment in years because she spends her days washing and ironing other folks’ laundry, complains about the noise of the show’s music. Penny’s mother, Prudy (Libby Dasbach), arrives and scathingly complains about it being “race music.”

Watching the show, the girls learn one dancer is leaving “for nine months,” and Tracy asks her mother for permission to audition. Fearing her daughter will be ridiculed for her weight, Edna refuses. Tracy turns to her father Wilbur Turnblad (Chuck DeLong), who owns a novelty shop. He wholeheartedly encourages her.

Tracy and Little Inez (Alani D’Lawren), a young black teen, are both rejected by a very nasty Velma – Tracy for her size and Little Inez for being black — as Velma sings “(The Legend of) Miss Baltimore Crabs.” En route to that disappointment, Tracy encounters her TV heartthrob Link Larkin (Justin Carty) and dreams about them becoming an item in the song “I Can Hear the Bells.”

Disappointed, the next day, Tracy winds up in detention at school again for her hair. Another student in detention is Seaweed J. Stubbs, whose mother Motormouth Maybelle (Corisa Myers with a voice like Pearl Bailey’s) is the hostess of the “Negro Day” on the Corny Collins Show. He happily teaches her some cool dance steps, and, simultaneously, becomes friendly with Penny.

At a Sophomore Hop the next day, Tracy dances around Corny Collins showing off her new steps. Collins, impressed, hires her for the show. Velma and Amber, a classmate of Tracy’s, are not happy.

On the show, Link starts warming up to Tracy, which further enrages Amber, while singing his Elvis-flavored rendition of “It Takes Two.”

Corny and Velma quickly learn Tracy is determined to bring diversity to the show every day, not just once a month. As the first act draws to a close, there is a protest march to the show site to demonstrate against the program’s racism.

A fight breaks out between the recalcitrant Velma, Amber, and several white dancers and the marchers, which include talented black dancers, and Tracy, her parents, Penny, Seaweed, and Motormouth Maybelle.

The spiteful Velma calls the police.

The remainder of the show sends the audience out humming “You Can’t Stop the Beat,” and with another perspective on those days in 1962 that changed the world.

This is truly a dynamic, must-see performance.

Running Time: Two hours and 20 minutes, including a 15-minute intermission. 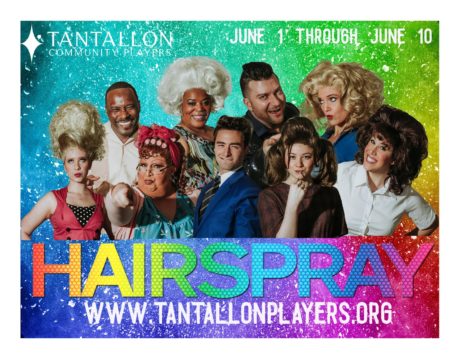