At a historical moment when appalling new waves of gender fundamentalism sweep our nation, leaving bigotry and violence in their wake, it was beyond refreshing to hear the Gay Men’s Chorus of Washington, DC’s TransAmerica concert Saturday night at Lincoln Theater. Featuring a stage full of soaring, sonorous voices and an astute program of songs in celebration of authentic selfhood, it was, in a word, exhilarating.

Even before the music began, the program’s inclusionary spirit was proclaimed in four flags hanging from balconies astride the stage. The program identified them this way:

The significance of the sweeping scope of this concert cannot be overstated. The LGBT world has experienced its own internalized gender fundamentalism, for instance, the uncivil faction who want to “take the T out of LGBT.” Meanwhile, among the saner and kinder-hearted, letters keep being added to the acronym to embrace more and more whose gender identities have been marginalized and disparaged in defense of patriarchal power and privilege. (It’s up to, I think, LGBTQIA+.) Thus for the Gay Men’s Chorus to declare with this program its allyship with all for whom those four flags fly is a remarkable testament to what “pride” ought to mean.

The opening number was a thrilling, full-throated performance by the 200-plus chorus of “Let the River Run,” interpreted by the 17th Street Dance troupe. Conductor Thea Kano, statuesque in black waistcoat and bejeweled shoes, commanded every emotion in the music with precision and passion. (The full program can be found below.)

The first of several speakers to give first-person testimony was Keygan Miller, who spoke of the pain of constantly being challenged by the question “What are you?” Miller then set the tone of courage for the evening: “I am done being anything but who I am.”

In another very personal statement, Morgan Dori said that the last election “changed my hope to fear.”

In this context, the Rock Creek Singers, a subset of the Gay Men’s Chorus, brought tender poignancy to Paul McCartney’s “Blackbird”:

The GenOUT Chorus, a vocal ensemble begun by the Gay Men’s Chorus for LGBTQ youth and their allies, entered from the auditorium in smart black outfits and colorful ties. They went on to sing a stirring rendition of “You Will Be Found” from Dear Evan Hansen, which has become the musical voice on Broadway of teenage outsiders—those who, in the words of one GenOUT member, “dare to create a better world” for themselves. The GenOUT Chorus’s simple gesture of taking each other’s hands, one by one, connecting everyone in the row, powerfully underscored “You are not alone.”

The moving words of Debi Jackson, the mother of a daughter named Avery who is trans, were read by Vanessa Ford. At four years old Avery told her mom, “You know I’m a girl, right?” Jackson’s family story became a beautiful emblem of acceptance and unconditional love.

Act One ended with pink paper blossoms strewn on the stage and nine dancers in white having exuberant fun in them as the chorus sang a medley of “I Love You” and “What a Wonderful World.”

Act Two got the audience roaring with a novelty number about bathroom bills, the chorus of which was “We just want to pee!”

But before long the mood was somber as the subject of suicide was broached in first-person testimony and song. One number, “Please Stay,” was especially touching:

Don’t let your worst day be your last.
Please stay

The GenOUT singers returned with a rousing version of “Truly Brave,” better known by words from its chorus:

Headlining the concert was Breanna Sinclairé, whose awesome operatic soprano filled the house with feeling on “Somewhere” from West Side Story and “You’ll Never Walk Alone” from Carousel.

At the end was an uplifting “This Is Me” from The Greatest Showman featuring the entire company fronted by Sinclairé in a duet with JJ Vera. It was a specular finale that for the moment made keeping track of whose gender is what irrelevant.

In keeping with the program’s spirit of inclusivity, there was poem by Charles R. Butler, Neto, projected on screen during intermission. It read in part:

What do you see when you look at me?
Am I a boy or a girl?
Do I make you uncomfortable?
…
The rainbow from man to woman is not
A clear difference even inside.
…
Why not address me
As the person I choose.
Help me discover my soul.
…
Perhaps in my choosing,
You will find yourself new,
Recounting your journey within,
Help me to help you affirm who you are,
Comfortable in your own skin.

The concert put centerstage some of the individuals who are most hurt by society’s gender policing. But really, who isn’t? Lots of people go around obsessed with what is normal. People who presume themselves normal go around fearful of those they presume are not. In order to be what they think is normal, they put down those they think are not. Eventually everyone ends up somewhere on that put-down or be-put-down vicious circle.

TransAmerica was one of the most timely, important, and liberatory concerts the Gay Men’s Chorus of Washington, DC has yet produced. In each and every programming choice and performance, it celebrated the possibility of affirming one’s authentic selfhood without derogating anyone else’s. That is a radical notion still. The world would be better off if more people got it. This concert set it to music—and left one humming the tune.

GMCW
“I Am Willing” by Holly Near, arranged by Steven Milloy
Soloist: Keygan Miller

“Who Will Love Me As I Am?” by Henry Krieger and Bill Russell from Side Show
Soloists: Michael Dumlao and Ellery Rhodes

GMCW
“At the Heart” by Gerard Gurss from “That’s Good Enough” by Debi Jackson, about her daughter Avery’s journey to be her authentic self
Narrator: Vanessa Ford

POTOMAC FEVER
“You Matter to Me” by Sara Bareilles from Waitress, arranged by Brad Stephenson
Soloists: Matt Holland and Kevin Thomason

GMCW
“For the Fallen” by Mike Sammes
Oboe: Alec Sherman

GMCW, GenOUT CHORUS, 17TH STREET DANCE, and BREANNA SINCLAIRÉ
“This Is Me” by Benj Pasek and Justin Paul from The Greatest Showman, arranged by Dave Volpe
Soloists: JJ Vera and Breanna Sinclairé 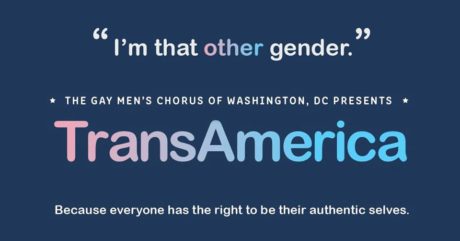 TransAmerica was presented by the Gay Men’s Chorus of Washington, DC on Saturday, June 2, and Sunday, June 3, 2018, at the Lincoln Theatre – 1215 U Street, in Washington, DC. For future GMCW concerts and events go to their website.

Review: ‘And the Tony Goes to…’ at The Gay Men’s Chorus of Washington, DC by John Stoltenberg