Tinker Bell has been a part of children’s lives since J. M. Barrie first introduced her to the literary canon in his 1904 play and 1911 novel. The Tinker Bell character has been ever present in the many subsequent incarnations of the Peter Pan story, and yet… how well do we really know her?

In his new play Tinker Bell, premiering at Adventure Theater this June, Playwright and Filmmaker Patrick Flynn shines a new light on the feisty fairy, placing her center stage and allowing her to tell her own story. Tinker Bell, based on the works of Sir. J. M. Barrie and directed by Nick Olcott will play from June 22 to August 20. It is recommended for all ages.

We asked Patrick what families can expect from Tinker Bell.

Culturally, Tinker Bell isn’t painted in the best light. She’s jealous, territorial, dramatic, and manipulative. She demands your attention or she will (quite literally) just DIE! And yet, her character is wildly popular. Why do you think we all love her so?

One of the reasons I took this project on was to find how who this beloved character was. I would say Tinker Bell has been portrayed as a brat, that is true. But if you go back to the original 1901 draft of the play and Barrie’s first Peter Pan story, “Peter in Kensington Gardens,” you find out that Tinker Bell (and the fairies in general) are tasked with protecting Peter from danger (and himself).

Barrie also says in both the story and play that fairies are so small they can only feel one emotion at a time. And that is something that I really grabbed onto.

How does your Tinker Bell deal with her emotions?

I’ve always been uncomfortable with Tinker Bell and Wendy’s relationship. So if you take it back to Barrie, you can see how she isn’t jealous of Wendy, she’s worried what Wendy means for Peter. And since she can only feel one thing at a time, that emotion takes over and she acts out.

As the parent of a son with autism, I am very interested in emotional intelligence and how we teach emotional responses to children. My Tinker Bell is not on the spectrum but she is emotionally stunted at the beginning of the play. And through the course of the script, she learns to feel her feelings in tandem, especially when it comes to her relationship with Wendy.

Tinker Bell famously doesn’t talk, which I find a bit ironic because she seems to have a lot to say! Her emotions and intentions are all shown through movement and expression. How did this factor into your piece? Did you give her a voice?

To be fair, she does talk, we just can’t understand her. And we deal with that in the show.

(You’ll have to see it to learn how.)

Our Tink is a bit of a motor-mouth, which I love. She has a lot to say and I took the tack that she has been silenced in portrayal for so long that it all comes pouring out at the audience.

Disney’s version of Tinker Bell is controversial. Many have accused and criticized them for using her character to deliver subversive, suggestive messages. What is your opinion on this? Did this element of her character’s history influence your research and work?

For myriad reasons, I consciously avoided Disney when writing the script. The male-gazeness of Disney’s Peter Pan is well documented. I personally don’t think the portrayal of Tink is as problematic as that film’s Tiger Lily and the Indians. But that goes back to Barrie and the acceptable racism of Edwardian England. It’s one of the reasons I excised Tiger Lily and the Indians from our show entirely. They’re not even mentioned.

Another thing Disney does that is odd is excise the famous scene where Tink drinks Peter’s poisoned medicine and replaces it with a bomb. I guess they wanted to avoid the audience interaction moment of “clap if you believe in fairies.” But dramatically for Tinker Bell, this greatly diminishes her power and importance. Sure, she saves Peter in the Disney film. But when she drinks the poison to spare his life, she makes the ultimate sacrifice, that last full measure of devotion and fidelity. It’s a fantastic bit of drama. Disney cheats her out of it and objectifies her at the same time.

What can we achieve by seeing this story through Tinker Bell’s eyes? What can she teach us?

Well, my snarky answer is: You’ll have to see the show to find out.

But the actual answer is I think the only reason to retell a known story through a different character’s eyes is to come at that story from a totally different angle. Barrie’s original story (and all subsequent adaptations) have been fantasies about eternal youth (specifically: male youth). That isn’t something that I was ever interested in. So I made it a story about what it really means to be a friend. It sounds simple but I’ll bet if you asked 10 people for their definition of friendship, you’d get 11 different answers.

What do you hope people walk away with after seeing your show?

In all seriousness, I hope they want to see it again. Family theater is a chance to enchant children with the magic of theatre the way I was enchanted when I saw The Wind in the Willows at the Delaware Children’s Theatre in 1984. That’s what I want. Family theater is so important. We are speaking to the youngest and most impressionable. We have the chance to fill their hearts with stories of love and kindness and understanding and acceptance and joy. To do anything less is irresponsible. 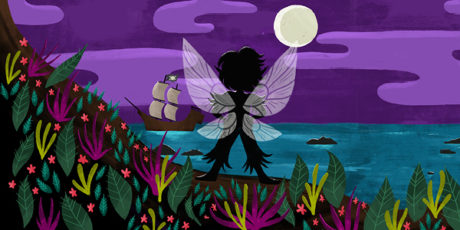 Bio: Patrick Flynn is a playwright and filmmaker based in Washington, D.C. and is thrilled that Tinker Bell is debuting at Adventure Theatre MTC. It can next be seen at First Stage in Milwaukee April 2019. The world premiere of his latest play, Sheila and Moby, opens at Flying V Theatre in Bethesda this November. Patrick’s films have won awards from L.A. Webfest and TIVA-DC and he is a veteran of the 48 Hour Film Project, receiving several awards including multiple writing, directing, and editing accolades as well as Best Film Award. His book Visual Literacy: A Practical Text on the Analysis, History, and Creation of Visual Media is available from Kendall-Hunt. Patrick hosts a podcast about original cast albums and the people who love them called The Original Cast.