With its all-too familiar themes of ambition and power, sexual misconduct and attempted cover-up, disclosure, remorse, and ultimate retribution, the plot of Francis Beaumont and John Fletcher’s Jacobean revenge drama The Maid’s Tragedy, first published in 1619, could have been ripped from today’s headlines. The disturbing parallels between the classic tale and the current #Me Too and Time’s Up movements are underscored in a new production conceived by Alyssa May Gold, directed by Lucy Gram, and presented at Access Theater by Pocket Universe.

Less an adaptation than a framing device, Gold highlights the renewed relevance of the theme in our own socio-political climate and feminist culture with allusions to the story’s relocation from historic Rhodes to present-day Hollywood (with a “crew call” on the cover page of the program; the distribution of a non-disclosure agreement to the audience upon entering; the use of contemporary costumes, and director’s chairs, wine bottles, and a script as props). She also imagines the lead characters in the narrative as the key figures in a film production (the traditionally male soldier Melantius, who repudiates the King’s relationship with his sister Evadne, is now a female film producer; Evadne is an actress; Amintor, to whom she is spuriously betrothed by the King to hide their illicit affair, is an actor; and the duplicitous King is the head of the movie studio). But the insightful concept is at odds with the show’s retention of the authentic Jacobean language and its references to Rhodes, the positions and ranks of the original characters, and the hero’s gender (addressing ‘her’ as “Sir”), which represent glaring aural and visual inconsistencies and anachronisms that fail to transport us to the play’s post-modern resetting (the barefooted appearance of the actors is another inexplicable contrast with both of the period styles). Perhaps the timeless significance of the subject would have been better served by an essay in the printed program, noting the distressing ongoing commonalities of the eras.

The success of the production lies in its consistently solid cast of six. All have featured scenes that demonstrate their facility with the archaic speech, understanding of their characters’ motivations, and portrayal of the heightened emotions, impassioned confrontations, and catastrophic conclusion inherent in the genre. Erin Roché captures the heroic demeanor, ego, and gravity of Melantius, along with the traditional attitudes towards family honor and female sexuality (with more than a little slut-shaming of Evadne, convincing her to reconsider her choices and values, and to exact her murderous revenge on her paramour by urging her to “curse him” and to “be wise and kill him”). Michael Thatcher is abhorrently entitled, lecherous, and Machiavellian as the King, and Greg Carere as Amintor convincingly wavers between his elation at the unexpected gift of Evadne for his wife, anger at her refusal to consummate their bogus union, and renewed love for his forsaken fiancée Aspatia – played with heartbreaking poignancy by Sydney Battle. Alyssa May Gold brings a range of shifting feelings to Evadne, at first delighting in her social-climbing liaison with the King and fully complicit in their marital deception with Amintor, then persuaded by Melantius to change her ways, and increasingly empowered in her quest for justice by making the King pay the ultimate price for destroying her reputation and negating any affection her husband might have felt for her. Rounding out the expressive ensemble is the commanding Aleca Piper in the multiple supporting roles of Calianax, Dula, and Lysippus, signaling the transitions of character with a change in costume accessories and hairstyle (though it helps to follow along if you’re already familiar with the story and its figures).

While there are some distracting issues with the intimate venue (the sound tends to echo, the air conditioner emits a constant buzz, the room’s large windows let in the natural light that is not always consistent with the times of day in the scenes, and the lighting design by Christina F. Tang incorporates spotlights and fluorescent bulbs aimed directly into the eyes of the audience, seated around three sides of the performance area), Gram’s excellent blocking keeps the action moving around the floor and visible from all areas, and her engaging direction maintains a level of passion appropriate to the subject (though with a running time of two full hours without intermission, the script could use a bit of trimming, to eliminate some the redundant moralizing).

In its ambitious production of this rarely-seen 17th-century classic, where Pocket Universe excels is in delivering the full-blown emotion, impact, and import of The Maid’s Tragedy through impressive acting and direction, and an acute awareness of the universality of its themes and their profound resonance in today’s world. 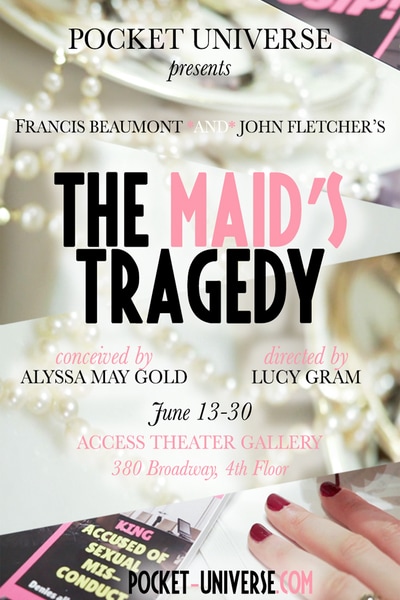