La serva padrona (or “The Maid as Mistress”) by Giovanni Battista Pergolesi opened for a special engagement this weekend at the Loudoun Lyric Opera, performing at the Carver Center in Purcellville, Virginia.

This opera is unique in that it is an intermezzo opera, designed as a warm-up for a longer production or as entertainment during intermission. Additionally, this opera buffa (or comic opera) is considered to be one of the key productions that led opera from the Baroque period to the Classical period. La serva padrona Director Gregory Scott Stuart, who also takes on the silent role of the servant Vespone, more than does justice to this rare and wonderful production. 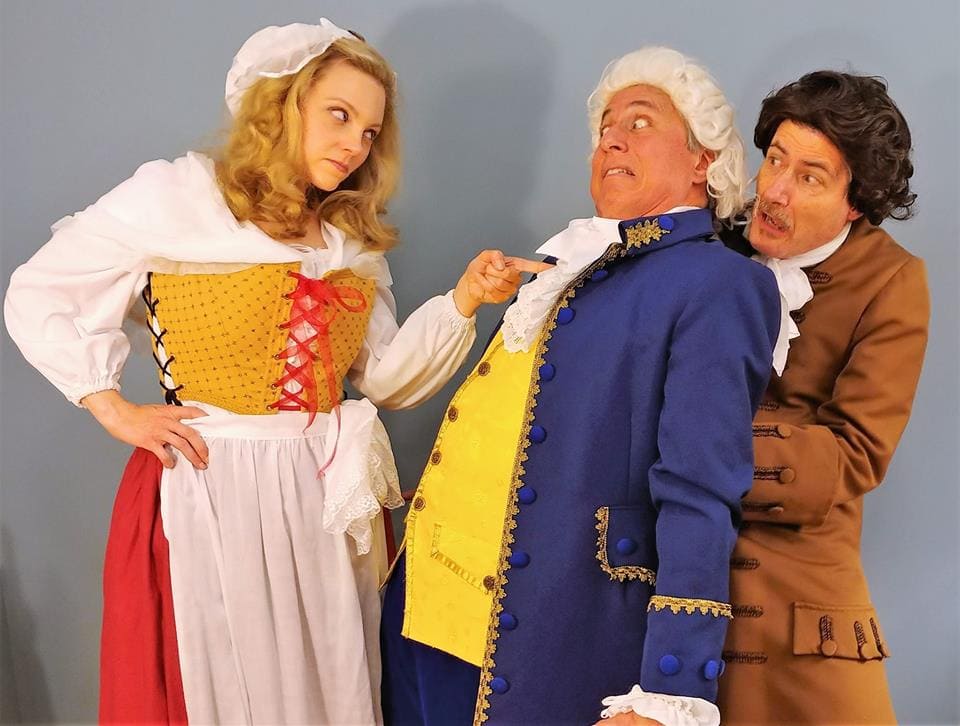 The show was preceded by a three-course Italian meal catered by a Purcellville favorite, Mama Lucci’s. The food was a real treat. For the entrée, you choose from a lasagna that is a mile high, smothered chicken parmigiana, pasta with either a marinara or alfredo sauce, or meatballs. Of course antipasto, salad, and bread are provided before the meal and a tray of delicious desserts appear at the appropriate time after. All of this serves as a delicious appetizer to the main course that is La serva padrona.

The plot of the opera can be summed up quite simply as one of a maid who has more serious plans for the wealthy gentleman she serves. Their romantic affair is immediately apparent. Annie Gill, as Serpina the maid, is both coquettish and cunning at turns. Her acting ability as she seduces her employer is equal to her clear and powerful soprano performance. The wealthy employer Uberto, played by bass-baritone Robert Ritter, follows Serpina around the stage in believable exasperation. Their vocal performances are near-flawless and perfectly complimentary in a way that is never shrill, but always pleasing.

Gregory Scott Stuart as Vesponse is drawn into Serpina’s web of manipulation and turns in a wonderful, if silent, performance. Stuart uses expressive movement to portray his role and has an intuitive understanding of which comedic notes to hit. It is interesting to see how these three performers interact on stage. I won’t spoil whether or not Serpina’s plan succeeds, but the conclusion is very satisfying.

Pianist Misha Tumanov is to be commended for his accompaniment of this fast-paced opera. Costumer Meredith Bean McMath also lends her talents to a believable palette of 18th century garb, including rich hues and varied fabrics which contrast enough to be apparent to the audience. The set, a collaboration between Assemblart and Florelle Leveque Madison, supports the cast in the small space available to them with just the right amount of richness; transporting the audience to the parlor of a wealthy gentleman.

La serva padrona from Loudoun Lyric Opera has one more engagement tonight. If you enjoy good food and good opera, be sure to get your ticket to this marvelous production of a comedic classic.