Yes, she really did, and Washington DC-based theater collective The Klunch brings its acclaimed original production of Laura Bush Killed a Guy, keenly written by company Artistic Director Ian Allen, to The Flea Theater for its razor-sharp New York premiere. Presented by Roger Sanders and Dana Scott Galloway, the true event from the early life of the former First Lady provides the basis for an often factual, sometimes surreal, and always sardonic parody of her little-known background in Texas and her years in the White House under the George W. Bush administration, gleaned from her 2010 memoir Spoken from the Heart, highlighted in online searches of her name, and embellished by the playwright’s acerbic imagination.

Structured in three acts (Perdition; Sedition; and Contrition), the eponymous character (augmented by Lucas Zarwell’s sound and David C. Ghatan’s lighting and back-wall projections) presents three varying accounts of the car accident that took the life of another high-school student, when the seventeen-year-old Laura ran a stop sign while talking to her friend and listening to Elvis on the car radio. Interweaving the central story with an array of autobiographical recollections, and giving it about as much earnest consideration as she does her sweet prize-winning recipe for “Cowboy Cookies” (samples of which the audience is invited to prepare and to taste), we are left to decide if it was a family-based murder plot, a teenage revenge killing, or simply a deadly incident of distracted driving that was whitewashed in the police records and resulted in no charges against her (perhaps due to her father’s wealth and position in town).

Under John Vreeke’s astutely understated direction, the uncanny Lisa Hodsoll, who received a 2018 Helen Hayes-Award nomination for her tour-de-force performance in the DC production, once again stars in the current solo show. Everything about her and her brilliantly-controlled portrayal screams white privilege, from her ever-so-tasteful ivory-toned suit and pearls, beige heels and gold pin (costume by Rhonda Key) to her practiced smile, polished demeanor, and prepared comments, offering politicized excuses, predictable denials, and the preposterous suggestion that “We were good people. We did the best we could. . . And really, if you could have us back . . . Wouldn’t you?” [Nope. Even by comparison with our present administration, that’s definitely a tough sell in NYC, especially for those of us who lived through 9/11]. With a spot-on southern accent, Hodsoll addresses us directly in the intimate space (fitted by set designer Kim Deane with an upholstered sidechair on an elevated platform and a photo of “Dubya” hanging on the wall behind), recounting anecdotes from her past, offering telling opinions about her family and contemporaries, nodding and gesturing, making eye contact and gazing off distantly, while running through a range of feigned emotions – consternation and distaste, wounded pride and aggravation, amusement, attraction, and steadfast devotion to her husband – before turning on a dime back to that flat façade of the affected smile and calculated tone of the groomed politico and the good wife.

The Klunch’s provocative production of Laura Bush Killed a Guy at The Flea will have you laughing out loud, then shaking your head and gritting your teeth at its mock nostalgia for the ‘good old days’ of the Bush years and “the intersection of fact and fiction” in the dubious recounting of history that it so mordantly examines. At least that’s how I remember it . . . 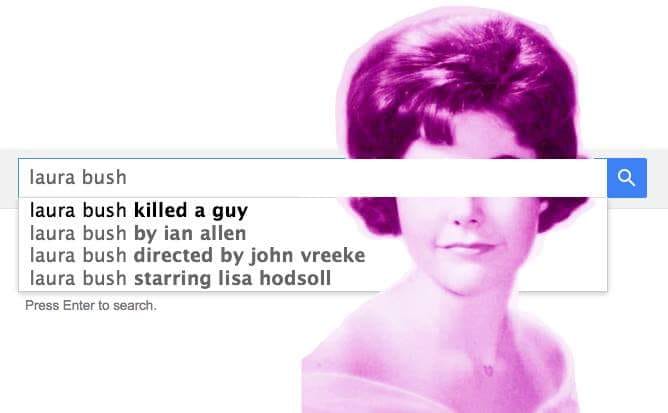