Irish Repertory Theatre’s new production of the 1965 Broadway classic (and 1970 movie remake starring Barbra Streisand) On a Clear Day You Can See Forever, with music by Burton Lane and book and lyrics by Alan Jay Lerner, provides an entertaining jaunt down memory lane to New York in the 1960s, and an occult trip back to London in the 1780s. Adapted and directed by company Co-Founder and Artistic Director Charlotte Moore, the current version includes some welcome gynocentric updates, along with a tongue-in-cheek recognition of the sexist attitudes of the earlier eras, while retaining the original lighthearted essence of the supernatural musical rom-com.

The amusing story of lives and loves revolves around Daisy Gamble, a single out-of-work working-class New Yorker with ESP and a smoking habit she must kick in order to land the job she wants. When her friend suggests hypnosis to overcome her cigarette addiction, she becomes the unwitting research subject of Dr. Mark Bruckner, a psychiatrist fascinated by her clairvoyance, extreme susceptibility to post-hypnotic suggestion, and unexpected past-life regression. Upon accidentally uncovering her 18th-century existence as the wealthy British aristocrat Melinda Welles – unhappily married to the philandering artist Sir Edward Moncrief – the doctor falls in love with Daisy’s previous incarnation, much to the surprise and dismay of her current self. Will they enjoy happiness together in the present, or will she have to wait another lifetime to find true love?

Tony Award nominee and Irish Rep regular Melissa Errico stars as Daisy (down-to-earth, but with unearthly powers) and Melinda (born to privilege, but destined to misfortune), meticulously shifting her accent and demeanor as she transitions from one to the other, conveying the characters’ distinctive personalities, capturing the heartfelt emotions they feel for the men in their lives, and rendering both women sympathetic and accessible. From her vivacious rendition of the exuberant “S.S. Bernard Cohn” to her stirring self-reflection in the show’s blockbuster “What Did I Have That I Don’t Have?,” her expressive voice and impressive range are as crystal clear as her irresistible characterizations.

Playing opposite Errico are Broadway veterans John Cudia and Stephen Bogardus as her love interests from across the centuries. Cudia makes for a dashing lothario as Edward, a seductive lover and unfaithful husband who, in his magnificent classical tenor, fervently professes his preference for Melinda over his unending string of mistresses in “She Wasn’t You.” Bogardus, as Daisy’s less-than-forthright but increasingly-enamored and driven therapist Mark, maintains a consistently affable façade until his self-serving intentions are revealed and he responds with an uncharacteristic outburst. Though his solos on the uplifting title song “On a Clear Day You Can See Forever” and the impassioned plea to “Come Back to Me” don’t quite match the emotional depth and vocal power of Errico and Cudia, they are eminently likeable, and give us an idea of why Daisy would have fallen for him.

The leads are supported by a harmonious ensemble (Florrie Bagel, William Bellamy, Rachel Coloff, Peyton Crim, Caitlin Gallogly, Matt Gibson, Craig Waletzko, and the outstanding Daisy Hobbs), portraying characters from the 18th and 20th centuries, in period-style costumes by Whitney Locher (those inspired by the Romantic era are especially transportive; those from the later time are not as appealing). Their vibrant song-and-dance numbers, featuring Barry McNabb’s ebullient choreography, are accompanied by live on-stage musicians conducted by Gary Adler, with beautiful orchestrations by Josh Clayton and music direction by John Bell (the ensemble’s lofty performances of the “Overture” and “Finale” are cleverly staged to fill the intimate space of the theater). James Morgan’s background projection art (with projection design by Ryan Belock) sets the various locales with recognizable landmarks in New York and London, while paying homage to the Pop-Art style of 1965.

Irish Rep’s On a Clear Day You Can See Forever offers a flashback to the paranormal fascination, contemporary art, and great musical theater of the Sixties, and an enjoyable two hours of escapist summer entertainment. There are no heavy political statements or staggering morals here, just some silly mid-century fun and romance. 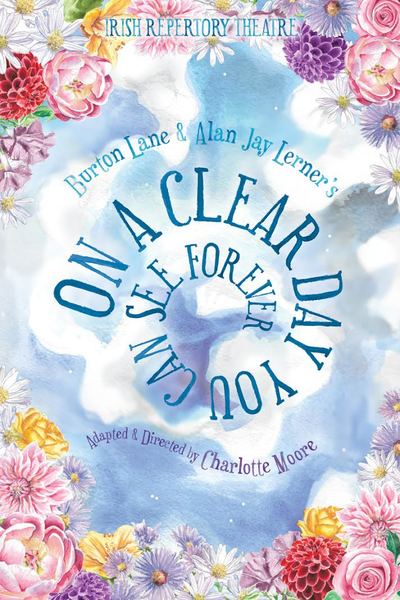 On a Clear Day You Can See Forever plays through Thursday, September 6, 2018, performing on the Francis J. Greenburger Mainstage at Irish Repertory Theatre, – 132 West 22nd Street, NYC. For tickets, call the box office at (212) 727-2737, or purchase them online.