The latest in Audible’s burgeoning initiative of audioplays is Girls & Boys by Tony Award-winning playwright Dennis Kelly. Directed by Lyndsey Turner and performed by multiple award-nominated actress Carey Mulligan, the live stage production, following its world premiere at the Royal Court Theatre in London, is playing a limited Off-Broadway engagement, through Sunday, July 22, at Minetta Lane Theatre (Audible’s new residence for its theatrical productions). But for those who can’t make it to New York this month, you can listen to the gripping solo show, recorded at Audible Studios in Newark, NJ, as a digital download. 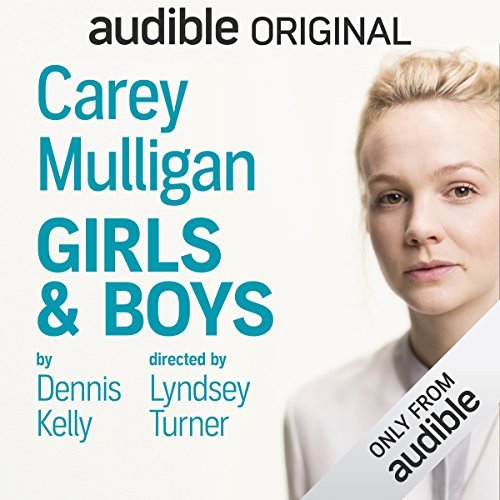 Presented in first-person direct-address narration, the monologue is intimate and candid, obscenity-laced and earthy, as the outspoken and opinionated unnamed Woman recounts interspersed memories of her husband, her young daughter and son, and her increasingly successful career. With no facial expressions, body language, or artistic design elements visible to listeners (as they are in a stage production), Mulligan faces the task of conveying both the narrative and her character’s emotions with only her vocal delivery – a feat that she accomplishes, under Turner’s eloquent direction, par excellence. We hear the meaningful changes in her intonation, speech pattern, and pregnant pauses, as she reconstructs the trajectory of the Woman’s life and slowly shifts from comic to tragic, while imitating the voices of the central figures in her family and profession, spontaneously philosophizing on timeless social issues, then soberly reciting the shocking statistics on violence and its well-documented gender disparity.

Beginning with the Woman’s funny chance encounter with her future husband in a line at the airport (as he cleverly rebukes two flirtatious female models trying to cut in front of him), through her unexpected rise in the film-production industry (initially wisecracking her way into the job) while his furniture-import business is failing, to her observations on the behavior of their children (the girl wants to play a game of architecture, the boy wants to play war), the underlying theme of the battle of the sexes and the disparate proclivities of the genders (are they innate or socialized?) becomes progressively evident. Mulligan’s tour-de-force performance steadily evolves into the story of a marriage gone irreparably wrong, with devastating consequences that evoke ancient Greek tragedy, but occur all too often in our contemporary society.

Following the shattering conclusion of the audio performance, Audible’s digital download includes a bonus commentary by the playwright on his interest in the subject, his two-year creative process in developing Girls & Boys for the stage, the minimal adjustments he made for the audio version to be fully comprehensible to the listener, and the universal relevance of his momentous themes – the complexity of our species, the coexistence of love and hate, and the reality of violence (“things that happen time and time again”). Kudos are due to Kelly, Mulligan, and Audible for making this important and affecting work accessible to a widespread audience.

Running Time: One hour and 46 minutes, including the playwright’s comments.