Theatre Du Jour’s The Accidental Pilgrim is an ensemble-devised work, directed by company co-founder B. Stanley. The ensemble’s style is heavily indebted to such twentieth-century theater innovators as Poland’s Jerzy Grotowski, the mime corporeal of Étienne Decroux, and Decroux’s Swedish student, Ingemar Lindh. As such, the work is physical, often abstract – and while well outside the mainstream of English language theater, it is particularly rewarding for those in the audience who don’t want everything spoon-fed to them. 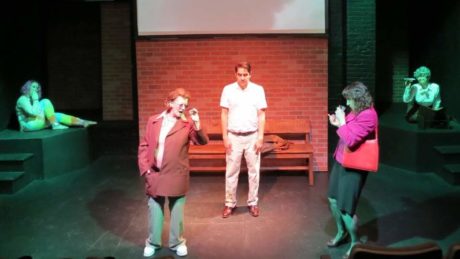 The first scene, which comes closest to what audiences might recognize as conventional drama, albeit in a highly absurdist mode, introduces the protagonist, an unnamed man (Jerry Herbilla) who finds his way to an infrequently used small town railway station. The man is seeking to get to Cassel, a town where he imagines his opportunity awaits. There are, of course, others, each one a seeming anachronism. The only one who belongs is the custodian (Rachel Reed), who with a black bowler, ill-fitting waistcoat, penciled in mustache and voluminous skirt, looks like a non-gender conforming refugee to the age of silent film comedy. The others appear to be anachronistic archetypes as well: a tabloid-reading hedonist (Annetta Dexter Sawyer) in 1970s wide-collared jacket and shirt, and tinted glasses, and a 1980s yuppie (Kris Roth) whose brightly colored fuchsia power suit, coupled with bustier and fishnets, embodies the contradiction of attempting to appear both powerful and an object of desire. She seems unable to find a resolution without provocative squats and frequent swigs from her flask.

The audience should not be surprised that Herbilla’s pilgrim is quick to lose his bags, his ticket, the battery power in his iPhone, and his bearings – leading to the increasingly abstract lands between nowhere and Cassel. There he crosses paths again and again with both the hedonist and the yuppie, and soon meets new characters, a purple-haired neo-hippie yoga practitioner (Jacquelyn Paulin, in the most developed movement performance of the show) wearing tie-dyed spandex and a jangling belly dance coin belt, reflecting the trend to create one’s own spirituality from whatever one can quickly assimilate (or purchase), and a prim and proper God-fearer (Reed, again) who folds paper airplanes from pages of scripture, reflecting strict adherence and the impulse to proselytize.

While the cube-headed masks that appear in some of the promotional photography recall the work of the Swiss troupe Mummenschanz, Theatre Du Jour uses them less for whimsy and more psychological exploration. Sound designers Nate Taylor and Rob Gould create surreal soundscapes, and are particularly engaging when reworking and invoking musical motifs from Kraftwerk and George Harrison.

The elements of The Accidental Pilgrim are in place, but as often happens when ensemble-devised works are first presented to the audience (like Stanley, I trained with students of Decroux, and worked in ensemble devised theater) the ideas and motifs are so new to the performers that the figures are not as precisely expressed as they can be. A keen eye will see that this is a level of precision that Theatre Du Jour is very capable of achieving –  so The Accidental Pilgrim still has the feel of a work in progress. The accompanying videos (presumingly by Stanley) seem to fit better with the performance when they rely on the use of found footage and abstract animation, then when they rely upon naturalistic footage of Herbilla’s pilgrim wandering through streets and fields. Still, even in its currently not-yet-refined form, the members of TDJ are inviting their audience not just to watch, but to actively imagine with them.